Typically in Dota 2, once The International concludes in August, most teams across all the major regions find themselves moving around and completely shaking up their rosters. Players are dropped or traded essentially en masse, as teams look to put together the best lineups they can field in order to find more success in the Dota Pro Circuit and eventually TI.

So, in 2020, with no DPC and no TI, there really isn’t that main catalyst that most teams react to or make these decisions around. Yet, still, we’re seeing some massive changes to some of the top teams in the CIS and Chinese regions. Big teams, big staples of the scene, are suddenly completely restructuring their teams, trying on new identities, and putting on fresh faces.

Realistically, it’s incredibly hard to say when international play between the regions will happen again, but should they be anytime soon, these new moves can have a profound impact on the competition. 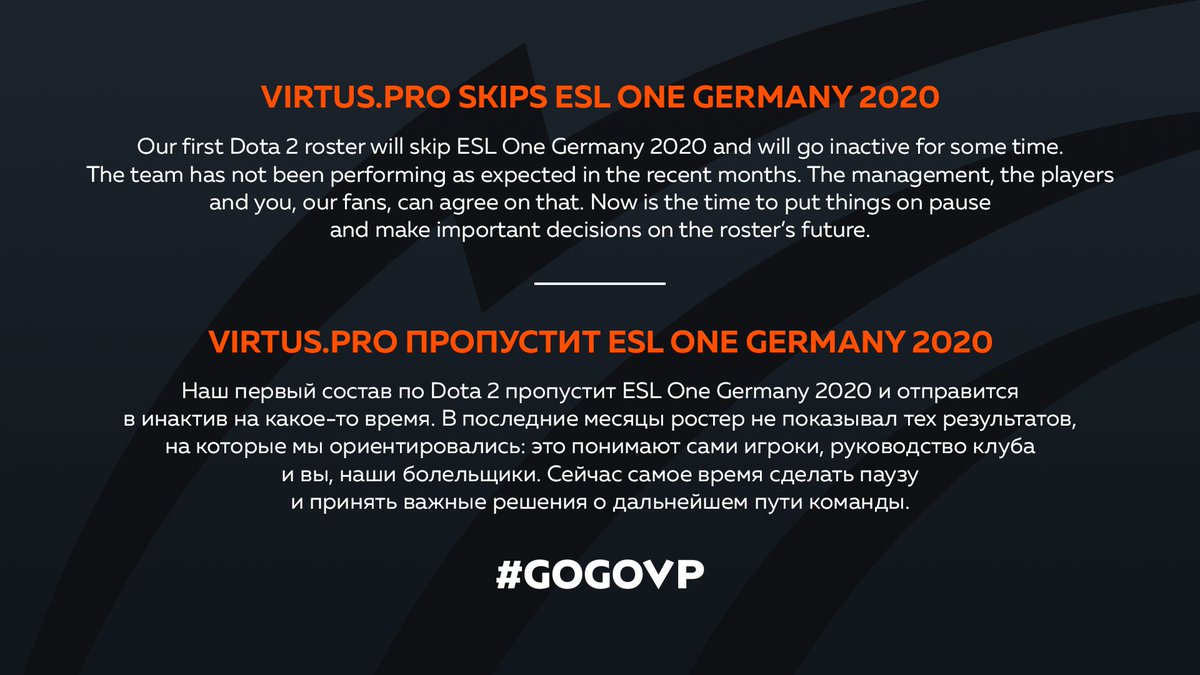 VP BOWS OUT, NA'V I RESURGES

One of the biggest announcements to send shockwaves around the community was Virtus. Pro's decision to take a step back from competitive Dota and turned their roster inactive for the foreseeable future. Citing recent bad performances, VP hopes a break can provide the time needed to figure out what exactly isn't working for them. What's interesting is that VP had put in some solid outcomes in the past few months, even winning two different tournaments during the online play of the pandemic, but for a squad with a history of success and high hopes, it wasn't enough.

VP historically has stuck by the same group of players for years, but post-TI9 the CIS juggernaut saw its first massive change with the departure of three players and the introduction of new talent and faces for the upcoming year. They're a loyal organisation, especially to their franchise players, Alexey "Solo" Berezin and Vladimir "No[o]ne" Minenko, who have been staples of the team and CIS region for a long time.

However, with the whole roster taking a step back, who knows if VP might make some more drastic decision making to their lineup, maybe such a radical move could be the thing that changes VP's prospects for the future. Whether or not that's true, is unclear. Still, for an organisation that's historically stuck by the same core for years, to make such a quick jump to deliberations after only a few months, it could have a profound impact on the CIS region.

Steadily climbing in the opposite direction, however, is Natus Vincere, the original champions of the International, and long-time fan favourite team. After heavy domination in the early days of Dota, Na’Vi’s time in the spotlight has seen faded out, but they have never been an organisation that gives up trying to crawl back to the top. Na’Vi recently saw a return to The International after a five-year absence from the tournament. Admittedly, they didn’t do very well at all, but a return to the mainstage was good enough for fans, and Na’Vi suddenly found themselves under the attention and admiration of the Dota scene once again.

However, following the reshuffle, they fielded a roster that had middling success from there on out, and recently, Na’Vi has committed to seeing the change that would bring about meaningful results. The starting five was benched, and Na’Vi signed FlyToMoon, a talented squad of CIS players with a lot of experience working together sponsorless. They placed solidly amongst other strong European and CIS teams, and Na’Vi took the prime opportunity to snag that talent to utilise in the upcoming ESL Germany 2020.

Their COO Aleksey “xaoc” Kucherov had this to say about the move.

“FTM has been playing together for quite a while without any contractual obligations, salaries and other benefits of the Dota sphere, and yet they managed to maintain a high level of discipline within the team. They showed good results in many tournaments this year due to a well-established training process.

“This is exactly what the CIS-Dota is lacking, where many professional players are looking for ways to play with friends or join them at their first call. These kinds of scenarios eliminate the prospect of building something long-term. Sooner or later, all teams face issues, and it’s important to be able to find the strengths to deal with them instead of running away.

“Today, we are glad to start our partnership with FlyToMoon, and we will do our best to have our fans hyped with the team’s performance.”

With that kind of holistic understanding and vision, Na’Vi seems committed to working on a team that overcome the obstacles and put on serious threats to the other teams in the region, and hopefully internationally as well.

Across the continent to the east, the Chinese teams in Dota 2 were experiencing their own shakeups. PSG.LGD, TI8 finalists, TI9 top three, and major winners, said goodbye to their entire squad of superstars, and welcomed in a new identity, seeing the return of Wang "Ame" Chunyu to the carry position, and adding former Wings Gaming support duo and TI champions Zhang "Faith_bian" Ruida and Zhang "y`" Yiping. Trading with another long-time Chinese staple, EHOME, PSG.LGD is looking to readjust their strategy and to bring new life into the squad that has been so reliant on their former talent, especially Lu "Somnusä¸¶M" Yao and Xu "fy" Linsen, who have left to form their own team and create new prospects for themselves.

This changeup is huge, ginormous even, as PSG have been one of the top dogs in China during the LAN events era, not so much online, but they're a historic roster, those players are revered internationally. They were the finalist in perhaps the best final of The International, and they were so close to returning to the contention in 2019. Somnus and Fy, they're some of the best players in their role in the world, and what could they possibly pull off to create a team or roster worthy of the calibre they promise. So much speculation goes into moves like this because they're massive departures from the norm and the world the Dota 2 community is familiar with, that there's nothing to do but to look onward in awe.

Moreover, EHOME, is looking to bring in a new look for themselves as well. As a team that has been in Chinese Dota since its inception, their new look is also crazy scary. Former TI finalists and immensely popular players, Yang "Chalice"' Shenyi, Song "Sccc" Chun, and xNova, round out the roster to create something magnetic and completely capable of being a team that can dominate and fight their way to the top of the region. 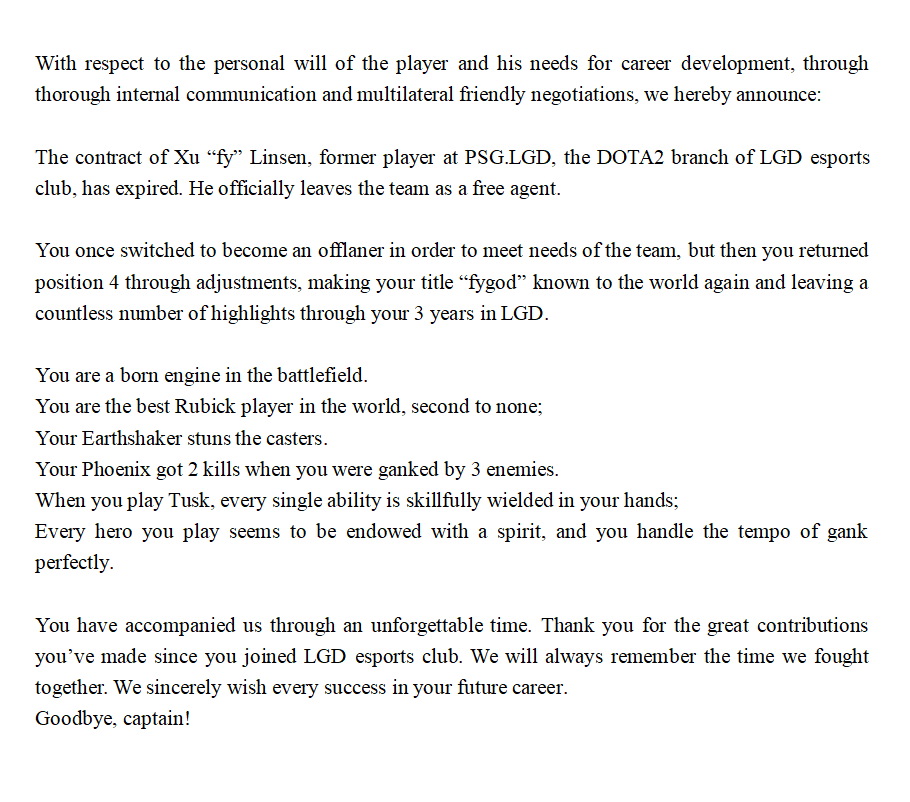 Chinese and CIS Dota just got the shakeup they needed to make sure their two regions have the circulation and the capacity to compete at the global stage. While those competitions may be a ways away from coming into fruition, these new looks are nothing short of exciting. It’s the perfect amount of mix-up, new dynamics, and optimistic prospects that fans and analysts want to see.

If something isn’t working, new strategies, new visions have to be implemented in order for things to move forward and with these massive roster movements, could potentially see some exciting and rewarding Dota in the upcoming months.