Prey no longer, the Chengdu Hunters quietly step into 2021 as apex predators.

While unmatched in their creativity, the Chengdu Hunters are through with being the outsiders looking in. In their short time as a franchise in the Overwatch League, they have come inches shy of the playoff race twice. However, the 2021 season is where it all comes together. Fresh faces meeting familiar friends, systems rebooting and retooling, the Hunters are set to battle through the most difficult region in the world. Under a quiet and unsuspecting guise, the Chengdu Hunters are here to prove they are more than some gimmick that preys on their opponents' lack of preparation. 2021 is the year the Hunters live up to their name.

This is the year the Chengdu Hunters drive a stake into the heart of the playoffs.

And it starts with a star main tank hailing from Overwatch Contenders China.

For the past two years, the Chengdu Hunters have had one glaring problem; they have consistently fielded a very shallow main tank pool. To be fair, this is not to discredit the work Ding "Ameng" Menghan did during the 2019 season, but when he was forced off of Wrecking Ball and the occasional Orisa pick, the Hunters suffered because of it.

Coming into the 2020 season, Taiwanese player main tank, Chen "ATing" Shao-Hua, was supposed to be Chengdu’s saving grace in this department but the pieces never fell into place, and the team looked more disjointed than ever. The Hunters have been in desperate need of a main tank who can play the majority of the traditional picks at a fairly high level—and now that is a worry of the past.

Qiu "GA9A" Jiaxin will be heading up the Chengdu Hunters’ front line for the 2021 Overwatch League season. The star rookie main tank has been a dominant force in the Asian amateur scene spanning through China and into South Korea as a part of the Shanghai Dragons academy team, Team CC. With an Overwatch Contenders title, multiple third party victories, and the Overwatch Contenders: The Gauntlet trophy sat nicely in their trophy case, it was clear that Team CC was the best team in the east.

This was in large part thanks to GA9A’s efforts.

Simply with his track record alone fans of the Hunters should be excited, but on top of that GA9A is as flexible as they come. He will not only be their biggest and most impactful addition to date, but his move to Chengdu underpins a sense of consistency this team has been searching for. However, it’s who he’ll be working with within the Hunters front office that should be electrifying the headlines. 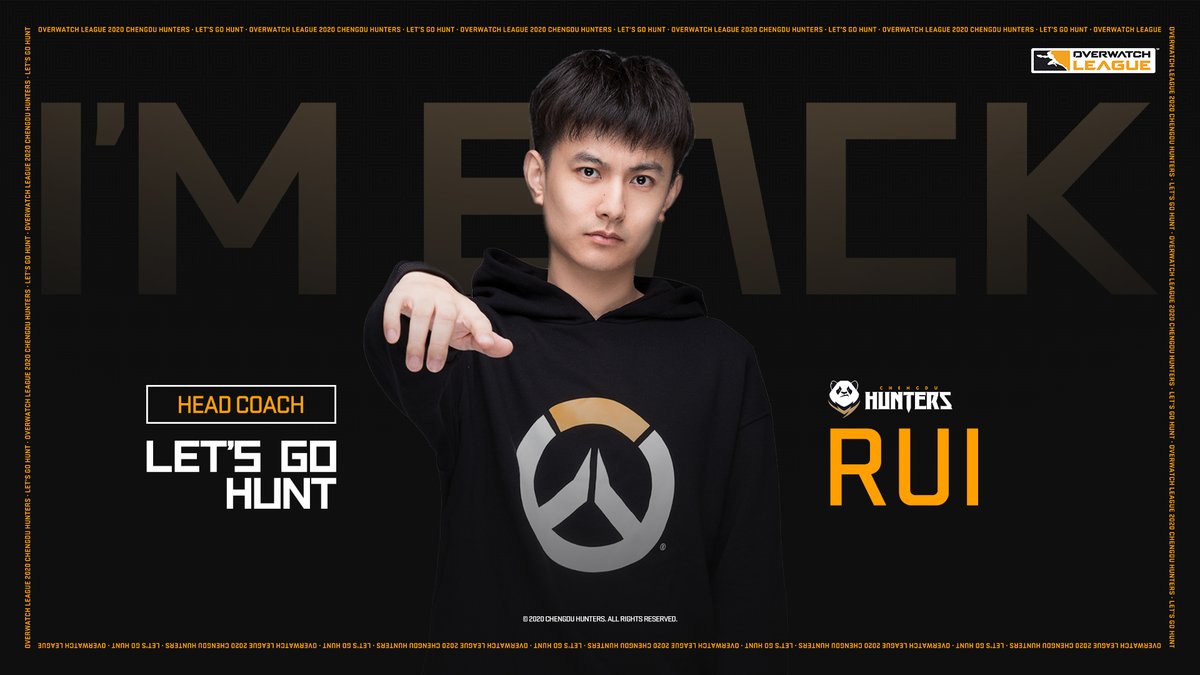 The Chengdu Hunters are welcoming back head coach and architect of their 2021 success; Xingrui "RUI" Wang.

This was the coach that led the Hunters to relative success during the 2019 season of the Overwatch League. Through the GOATS metagame, his ability to adapt and find creative solutions for his team to succeed was lighthouse through a point of stagnation when it came to hero picks. Somehow, without their Reinhardt specialist, the Chengdu Hunters managed to persevere using Ameng’s stellar ability with Wrecking Ball to pioneer a new composition, one built for them. It wasn’t the best by any stretch of the imagination, but it was good enough for them.

Remember Team China’s successes during the 2018 and 2019 Overwatch World Cup? That was also large in part, thanks to RUI.

And if we go even farther back, his first-team—which includes many familiar faces to Hunters fans—Miraculous Youngster, was a domestic hit all throughout 2017. This was a team that was able to compete with South Korean talent as well, something that was incredibly rare for that time.

However, what sits as a throughline across his career is his ability to play within the boundaries of the given metagame but also allow for his players’ individual ability to shine through with creative picks and strategies tailored to them. This was a massive piece of the puzzle that was sadly not on the table during the hero pool format change for the 2020 season.

What’s more exciting is how deep the Chengdu bench is going to be and how that interplays with RUI’s vision for Overwatch. With substitutes at every role, a new academy team that can act both as a talent pipeline and a place to keep veteran players warm, RUI now has everything a head coach could ask for, and the Hunters will reap the rewards from giving him such a cornucopia of resources.

RUI is the best coach you’ve never heard of, and he deserves all the respect in the world. With a track record that rivals some of the best coaches in the Overwatch League today, RUI will be integral in Chengdu’s revitalisation in 2021. However, his return also marks the reunion of some of the best parts of Miraculous Youngster.

Superstars often burn the torch from both ends. Their flames are bright and blinding, but they rarely last. That was the narrative that orbited the Hunters’ ace Huang "leave" Xin during his debut in the 2020 Overwatch League season. We’ve seen his prowess in the past, recall back to the 2018 Overwatch World Cup where he was large in part the reason Team China earned the silver medal. Doomfist, Zarya, Tracer, McCree, Hanzo, Leave was all over the place and looked fantastic on most of the picks. However, while being ineligible for the Overwatch League due to his age, leave wasn’t actively competing. This begged the question; after being out of the game, could leave still compete at the highest level?

With 2020 behind us, we can safely say that yes, leave still has what it takes, but it some time to reach that conclusion. Throughout the May Melee he put up promising numbers, especially considering his team suffered a narrow defeat at the hands of the New York Excelsior early in the quarterfinals. On Echo, Leave was ranked outside of the top ten in final blows and eliminations per ten minutes; however, he did lead the league in hero damage done per ten minutes.

During the Countdown Cup, Leave’s Tracer led the league in final blows and eliminations per ten minutes and was ranked second in hero damage done per ten minutes. For the entirety of the Asia Playoffs, Leave had a strong showing on Ashe as well. By the start of the Asia Playoffs, it was clear that leave needed some time to get the matches the strike, but once he did, you started to see that same fire that you did back during the Overwatch World Cup and on his former team, Miraculous Youngster.

With that acceleration complete, his rookie season under his belt, and upgrades to the team, leave is on track to return to his all-star form—and it’s happening when the Chengdu Hunters are going to need it the most. The Eastern Region this year, once again, looks to be the most competitive throughout the Overwatch League. Leave will be a massive weapon in the Hunters’ toolkit if they aim to disassemble the status quo domestically.

With the arrival of a glowing rookie, the return of a legendary coach and their ace looking in top form, the Chengdu Hunters aren’t just going to manage to be competitive, they’ll have their best season yet in 2021. Whether you expect them to or not, Chengdu is going to turn some heads come April.