The fallen empire of North America.

One of the biggest teams to make it out of North America has recently taken a step back from competing. Team Envy has pulled their roster from competing in Counter-Strike: Global Offensive (CS:GO). Being a founding member of competitive Counter-Strike meant Team Envy had a lot to prove this year. Because of this drive to succeed, they won back to back titles and dwindled the playing field.

One by one, Team Envy began earning multiple first-place finishes making them the cash cow of esports. Just like all underdog stories, the North American legends began competing for last place. The team that was once acknowledged as a powerhouse in its industry has officially retired from one of the biggest online shooters.

THE PRESSURE BEHIND ESPORTS

A ton of factors led to the downfall of Team Envy, including poor management, unorganised teams, and a lack of chemistry. CEO Mike Rufail, also known by his alias tag Hastr0, has kept an orderly fashion leading up to this disband. Knowing the number of teams he has to manage, it could be possible that his CS:GO roster was put on the back burner.

Team Envy began to move away from the spotlight around 2018, but before that, they were unstoppable. While the org was based in America, their roster was full of French talents. In 2017, their profits hit over a million dollars which was unheard of at the time considering the size of competitive gaming.

Besides the addition of Noah "Nifty" Francis in 2018, the majority of Team Envy was acquired in 2020. Nifty was mostly known for his time with Renegades between 2017 and 2018 where he was the main AWPer. He won multiple events in Asia where he mostly faced off against TYLOO in the finals. After joining Team Envy, Nifty’s tournament earnings went down the drain.

No longer was he dominating seven-figure events but instead struggling in qualifiers. Moving from events hosted in Asia to North America didn’t come naturally to Nifty. Why should it, both scenes are extremely different when it comes to the amount of competition.

On January 31, 2020, Team Envy signed Bugra "Calyx" Arkin and Michal "MICHU" Muller. Both players had their fair share of victories but briefly began to struggle in 2019. Calyx moved his way up the ranks while competing for Turkish Teams including Space Soldiers and Dark Passage. His role as a lurker was rare yet technical and often helped win important rounds.

Calyx made a brief exit from the Turkish scene in 2019 as a trial player for Windigo Gaming. While it didn’t work out in the end, Team Envy gave him one last chance to compete in a different region.

MICHU was once a must sign entry fragger back when he played for Virtus.pro and Team Kinguin. He switched back and forth between B and S-Tier events making him a flexible player at the time. He usually placed second at high roller events and was often cut short from victory. That’s why when Team Envy gave him a chance to rebuild a well-known org; he was all in.

Envy
@Envy
Today we bid farewell to Envy CS:GO.
Thank you to all of our players & staff for your time and dedication while on Envy. We wish you all the best in the future.
ðŸ“œ: 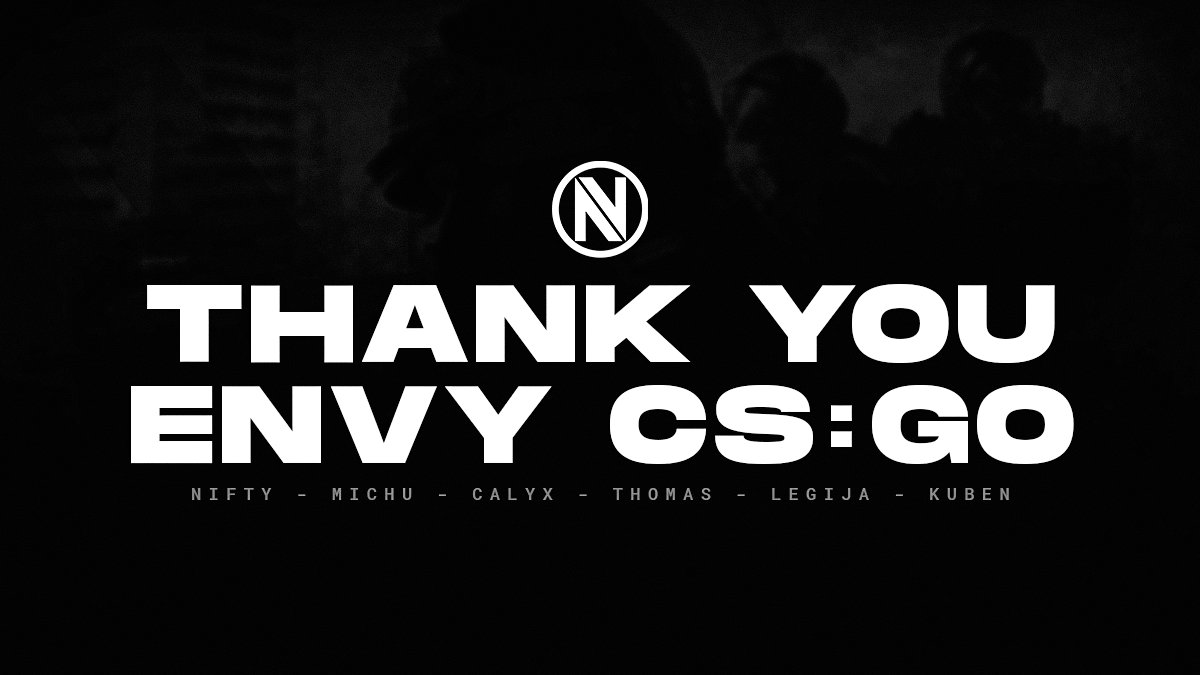 After Team Envy announced their departure form CS:GO, a lot of eyebrows were raised following the situation. One of the biggest theories which was passed around was EnVyUs Academy and their role in the disband. Like most teams at the time, Team Envy formed an amateur roster to one day play with the best.

They lasted for roughly one year before moving on as a handful of free agents. While they earned more money than most academy teams, it wasn’t enough to be considered as potential pros. The only player to make it out was Ali "hAdji" Hainouss, who now plays for Team LDLC.

Team Envy participated in a total of four events last year along with two qualifiers. The main reasoning behind this was their last-minute roster. Nikola "LEGIJA" Ninic and Thomas "Thomas" Utting only made an appearance in August of last year creating a short window to practice.

On top of that, head coach Jakub "kuben" Gurczynski only had five months to build a bond with his team. Instead of forming a lineup that lacked experience, Team Envy could’ve pulled away back in 2019. Their run in 2020 was uneventful and even led to the team's overall final run. Proper management can often make or break a team, despite their talented players.

All of Team Envy is currently on hold and has yet to decide on their future teams. It’s hard knowing a team this big can one day fall apart under an extreme amount of pressure. The most important thing to take away from this is Team Envy's management and over-commitment. Their players obviously have a lot of talent but haven’t been the centre of attention for years now. All they can do now is either stick with Team Envy during their lowest time or find another org.