With Smash Summit 9 underway, we take a look at this week’s exciting sponsorship news and discuss the latest Japanese Melee rankings.

Welcome to the ninth edition of GGRecon's weekly Super Smash Bros. breakdown! Tune in every Friday for a quick-and-dirty recap of all the news worth knowing in the competitive Smash scene.

The calm before the storm

Yesterday marked the first day of streaming for Smash Summit 9. Although the higher-stakes matches in the singles bracket didn’t begin until today, there was plenty of action for Melee diehards to catch in yesterday’s stream, including a “swag bracket” in which competitors prioritized style over winning and advanced through the bracket based on a Twitch-chat poll rating their stylishness after each set. Additional events on yesterday’s “fun stream” included a glitch showcase by Jeffrey “Axe” Williamson and a side stream showing a 15-minute loop of Zain “Zain” Naghmi playing a one-man game of Twister throughout the day.

The real action starts tomorrow, with heavy hitters such as Juan “Hungrybox” DeBiedma and Joseph “Mang0” Marquez dueling for the lion’s share of the invitational tournament’s $50,000-plus prize pool. All eyes will be on Hungrybox to climb back to the top after a loss to Zain at Genesis 7. The last seven times Hungrybox entered a tournament without being first seed, he’s won the whole shebang—let’s see if he can pull it off again this weekend.

wheat
@GimmeDatWheat
Smash Summit 9 is only the twelfth tournament since the start of 2017 to feature Hungrybox and not have him seeded first.
Will Summit 9 break the top seed curse this weekend? 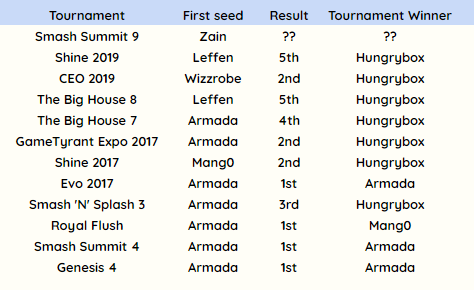 And, of course, the recently sponsored Zain will look to double down on his Genesis victory with another major win at Smash Summit, which would certainly put him in contention for the year-end No. 1 rank.

This week also marked the release of the hype video promoting Japan’s latest Super Smash Bros. Melee rankings. With slightly over-dramatic vibe and a stylized production style, the video made me feel like I was watching the intro to an anime show.

While the ranking features some familiar faces, such as former Japanese No. 1 Nao “Gucci” Iguchi and known America-visiter Kounotori, it lacked some of the Japanese Smash players who are most well-known in the United States, such as Masaya “aMSa” Chikamoto and Daiki “Rudolph” Ideoka. While aMSa was still included as an honorary mention—he simply hasn’t been active enough at Japanese tournaments to qualify for the ranking—Rudolph appears to have fallen off the face of the Earth, and may have quietly retired from professional Smash.

The video also included some relatively new faces within its top-10 rankings, such as Falpan, who clawed his way to the No. 5 position using Falco, Fox, Ice Climbers, and even Link to defeat some of Japan’s best. Falpan is relatively unknown in North America, but I’m hopeful that he will make it stateside this year to show the American scene what he is made of.

There were only two roster moves this week—both in Melee—but they were big ones.

On Monday, Shephard “Fiction” Lima announced that he had signed with Poilon, a French software company owned by Melee player Paul-Armand “Poilon” Assus. This is a bit of a nontraditional sponsor, but it’s great news for the world No. 11, who joins Alvaro “Trif” Garcia Moral on the organization’s roster.

Fiction
@FictionIRL
Happy to announce that I am now sponsored by @Poilon!
The owner is a veteran smasher with a sick falco. He made a successful web/app development company and wants to invest some of it into smash!
Very thankful for this opportunity!

And just yesterday, Edgard “n0ne” Sheleby announced on-stream at Smash Summit 9 that he had joined UYU as the team’s first Smash representative. N0ne is a great pick-up for UYU, whose roster also includes top Tekken players such as Sang-hyun “Jeondding” Jeon and Sun-woong “LowHigh” Yoon.

UYU 丨 n0ne
@n0ned
Happy to announce that as of today I am now part of the @UYU family!
Am beyond excited to rep the org in upcoming endeavors, especially since I have backstory in fighting games. Have some exciting things planned for the Melee scene
As of today you can refer to me as UYU | n0ne 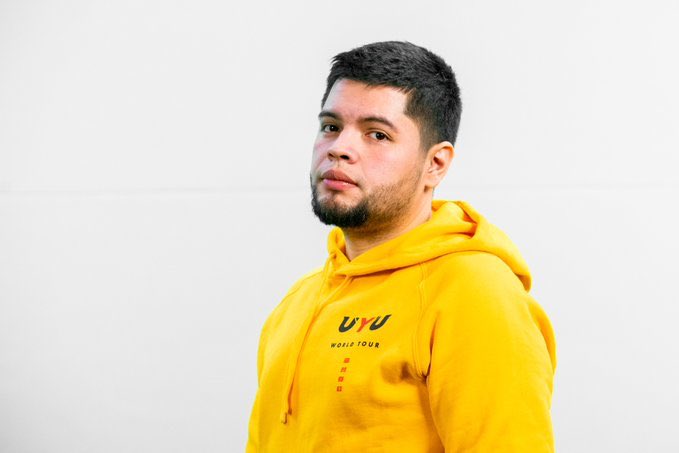 To round out this wrap-up, here are a few of the funniest and flashiest clips of the week for both Melee and Ultimate. Enjoy ‘em—and be sure to check in next week for the tenth edition of GGRecon's weekly Smash breakdown!

Andrew Nestico 🐼🌎📊
@PracticalTAS
This is still one of the nicest combos I've ever done. The two Foxes in this clip received the exact same controller inputs, and were desync'd using positioning differences and hitlag.