Alex Lee gives us his first of many weekly round ups.

Welcome to the first edition of GGRecon’s weekly Super Smash Bros. breakdown! Tune in every Friday, for a quick-and-dirty recap of all the recent news worth knowing in the competitive Smash scene.

The biggest story of the week was Gonzalo “ZeRo” Barrios’s announcement that he will no longer stream on Twitch, pivoting to Facebook’s streaming service after signing an exclusive deal with the social media platform. ZeRo’s Twitch stream has experienced significant growth in the past year. Last December, the former Smash for Wii U champion briefly rocketed up to the third-most viewed position on the platform after the release of Super Smash Bros. Ultimate. At the time of his announcement, ZeRo boasted the 272nd-largest following on Twitch, with 520,000 followers and thousands of loyal subscribers.

ZeRo’s announcement comes only a few days after he sparked controversy within the Smash scene by dismissing the effectiveness of psychotherapy on his secondary Twitter account. The scandal doesn’t seem to have impacted ZeRo’s numbers, though: his first Facebook stream VOD garnered over a million views in under 24 hours, although this figure may have been inflated by Facebook’s questionable viewership metrics.

Bear [TG]
@BearUNLV
Wait is that 1.1 million views for ZeRo's Facebook stream VOD in like less than 24 hours???
😳😮 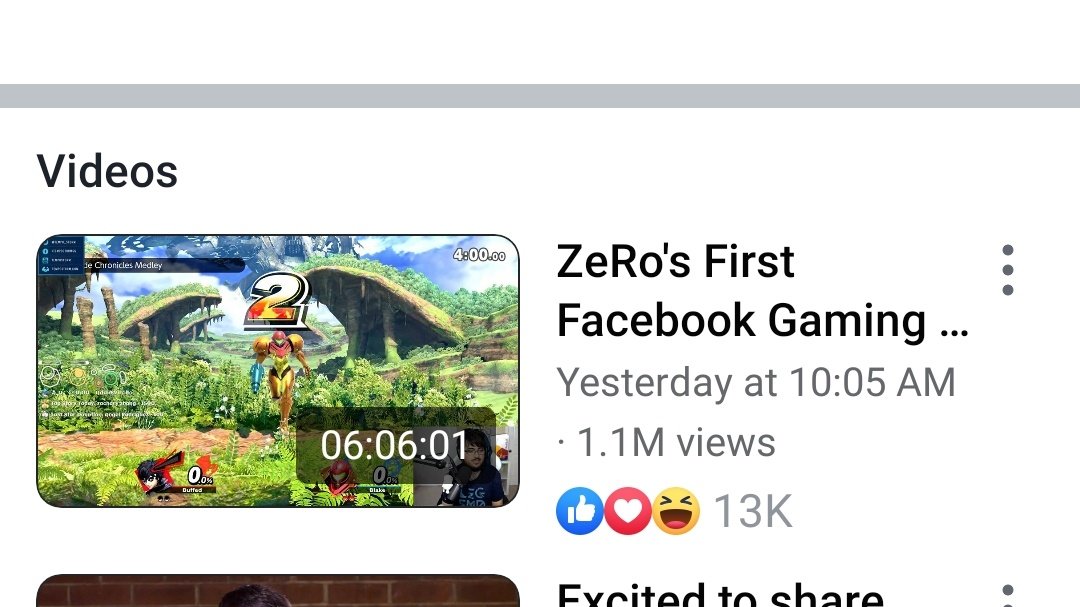 ZeRo is not the first prominent streamer to make the jump from Twitch to another platform. In August, after Tyler “Ninja” Blevins announced his move from Twitch to Microsoft’s Mixer, Twitch updated his channel in order to promote other streamers. Last month, Jeremy “DisguisedToast” Wang also announced that he would be making the jump to Facebook. So far, ZeRo’s Twitch channel remains untouched by Twitch staff, though it will purportedly never be used again.

William “Leffen” Hjelte was the main character of Smash Twitter over the weekend, making a loser’s run to first place at DreamHack Winter 2019—and tweeting brutal criticisms of the Ultimate metagame all the while.

Leffen
@TSM_Leffen
Headed home from Dreamhack now, feels good to end this Ultimate arc on a win!
Not going to be making any promises but in the near future my focus is not going to be on competitive ultimate.
I'll be streaming it sometimes still, but main streams are going to be Melee+variety.
66
3577

Leffen’s complete lack of enthusiasm towards Ultimate was evident in the anti-pop-off he delivered after his grand finals victory over Ramin “Mr. R” Delshad.

This isn’t the first time Leffen has expressed his distaste for competitive Ultimate, but it appears that the Swede has officially had enough with the latest Smash title. Leffen might still enter Ultimate tournaments on occasion, but Melee is once again his primary game.

You can audition to be in the next Smash documentary

Travis “Samox” Beauchamp, the filmmaker behind the seminal The Smash Brothers documentary, is accepting auditions to narrate his upcoming sequel, Metagame. The narration of the original documentary, recorded by Samox himself, was an iconic element of the film; this is your chance to reserve your own spot in the annals of Smash history.

samox
@_samox_
Sorry, been in and out of consciousness today. Definitely getting down with the sickness.
No stream today; 50/50 on tomorrow.
Pray for my lymph nodes.
Also once again, the proper link to the audition:
3
47

Since this is the first installment of our weekly wrap-ups, it’s also worth mentioning the most high-profile roster change of the last two weeks: Johnny “S2J” Kim’s exit from Halocline Gaming on November 25. S2J is now the second-highest-ranked free agent in Super Smash Bros. Melee, after world No. 7 Zain “Zain” Naghmi.

To round out this wrap-up, here’s a few of the funniest and flashiest clips of the week for both Melee and Ultimate. Enjoy ‘em—and be sure to check in next week for the second edition of GGRecon’s weekly Smash breakdown!