If you play against Suning, don't let huanfeng have Jhin, or any AD for that matter.

In an unforeseen result that many analysts, casters, fans and even players didn’t expect, Suning upset JD Gaming 3-1 in the second Quarterfinals match of the week of the League of Legends World Championship.

The third-seeded League of Legends Pro League (LPL) team — representing China — got an impressive victory over one of the tournament favourites behind Top Esports and Damwon Gaming. JD Gaming, the team who took Top Esports to five games in the LPL Summer Final after Top Esports swept Suning, fell before the might of Suning and Tang “huanfeng” Huan-Feng’s career-defining performance on the Jhin. What was equally as impressive was the fact of how Suning got to the World Championship, to begin with.

Medic
@MedicCasts
I think a lot of people won't appreciate how much of an upset this is.
JDG won Spring, took TES to 5 games in Summer. Suning were 11th in Spring!
Honestly one of the biggest underdog stories of Worlds.
64
1738

To start the year, Suning had an abysmally subpar performance in the Spring season finishing 11th in the standings with a 7-9 record. This 7-9 record was tied with other teams ranging from 9th place Vici Gaming to 13th place Rogue Warriors. The performance that they brought to the spring put them two spots away from playoff participation, leaving them to wait till the summer split for another chance at the LPL title. While Suning finished in 11th place, JD Gaming — the second-seeded LPL team at Worlds and the team who they just upset — finished in first place having bested Top Esports 3-2.

Once the Summer split rolled around, Suning turned a new leaf, jumping seven spots in the standings — going from fourth place to 11th place. They got there posting a 12-4 record, tying former World Champions from the 2018 Worlds tournament, Invictus Gaming. Come playoffs, Suning sat in the Quarterfinals awaiting the victor between LPL’s #5 seeded Victory Five and #8 seeded FunPlus Phoenix — the World Champions from last year’s World Championship. After Victory Five handily defeated the former World Champions 3-1, Suning returned the favour with a 3-1 of their own — moving them on into the Semifinals against eventual tournament winners, Top Esports.

Top Esports dismantled Suning, putting away any doubts that people had about them going into those summer split playoffs. Suning would later sweep LGD Gaming in the third-place match, giving them a better seed going into the LPL Regional Finals. The LPL Regional Finals was last remaining chance for four LPL teams to take the last two LPL spots at Worlds. The four teams left were Suning, LGD Gaming, Invictus Gaming, and FunPlus Phoenix.

Suning, once again, swept LGD Gaming, qualifying for Worlds as the LPL’s third seed. LGD Gaming would later best Invictus Gaming in the second round of the Regional Finals, taking the fourth and final Worlds spot.

In many people’s eyes — analysts and fans alike — both of the teams could be swapped as far as who would take the first seed was concerned. Ultimately, Suning ended up taking the first seed as they finished with a 5-2 record. Those two losses came in the second week of round-robins as they went flawless in the first week.

Their first loss happened by the hands of G2 Esports in perhaps what was the game of the tournament, possibly the whole year. It was a close game in which Suning had G2 Esports with their backs against the wall at their Nexus, G2 were able to hold their ground, turn around some kills and end the game for themselves. The second loss was to a surging Team Liquid who were firing on all cylinders, trying to make a last-minute run for the second Quarterfinals spot — Suning would later defeat G2 Esports, slashing Team Liquid’s hopes… Bye, bye, Miss American Pie.

Bring on the Quarterfinals versus JD Gaming. Suning and JD Gaming hadn’t faced off since the summer regular-season in the LPL — this was over eight patches ago. The last time these two teams met, JD Gaming took the better of them as they defeated them 2-0. Although Suning did have a strong performance in the LPL’s Summer Split, they were just one game behind JD Gaming. Suning got demolished by Top Esports in the playoffs, who JD Gaming managed to push to the distance in the Finals — JD Gaming also defeated Top Esports in the Spring Finals 3-2. As far as power levels were concerned, Suning were a level below the titans of Top Esports and JD Gaming.

With several patches have gone by, this meta was a very different, one that suited Suning more properly now and it showed. Suning blew everyone out of the water — including their opponents — as they demolished them 3-1. All of the wins were off of the back of outstanding all-around play, especially from their AD Carry, huanfeng.

His career-defining performance was absolutely spectacular, as he had insane score lines across each of the games. The rookie is a certified monster, and he’s going to terrorise the LPL and the rest of the World for years to come. Don’t get it twisted, 95% of the analysts picked them as the losers — same with fans and their Pick’ems. This caught everybody off guard — it was exciting, exhilarating and straight-up impressive.

LoLEsports Stats
@LoLEsportsStats
The player of the series in @suning_gaming's 3-1 win over @JDGaming: huanfeng! In 3 out of the 4 games he dealt the highest damage to champions! #Worlds2020 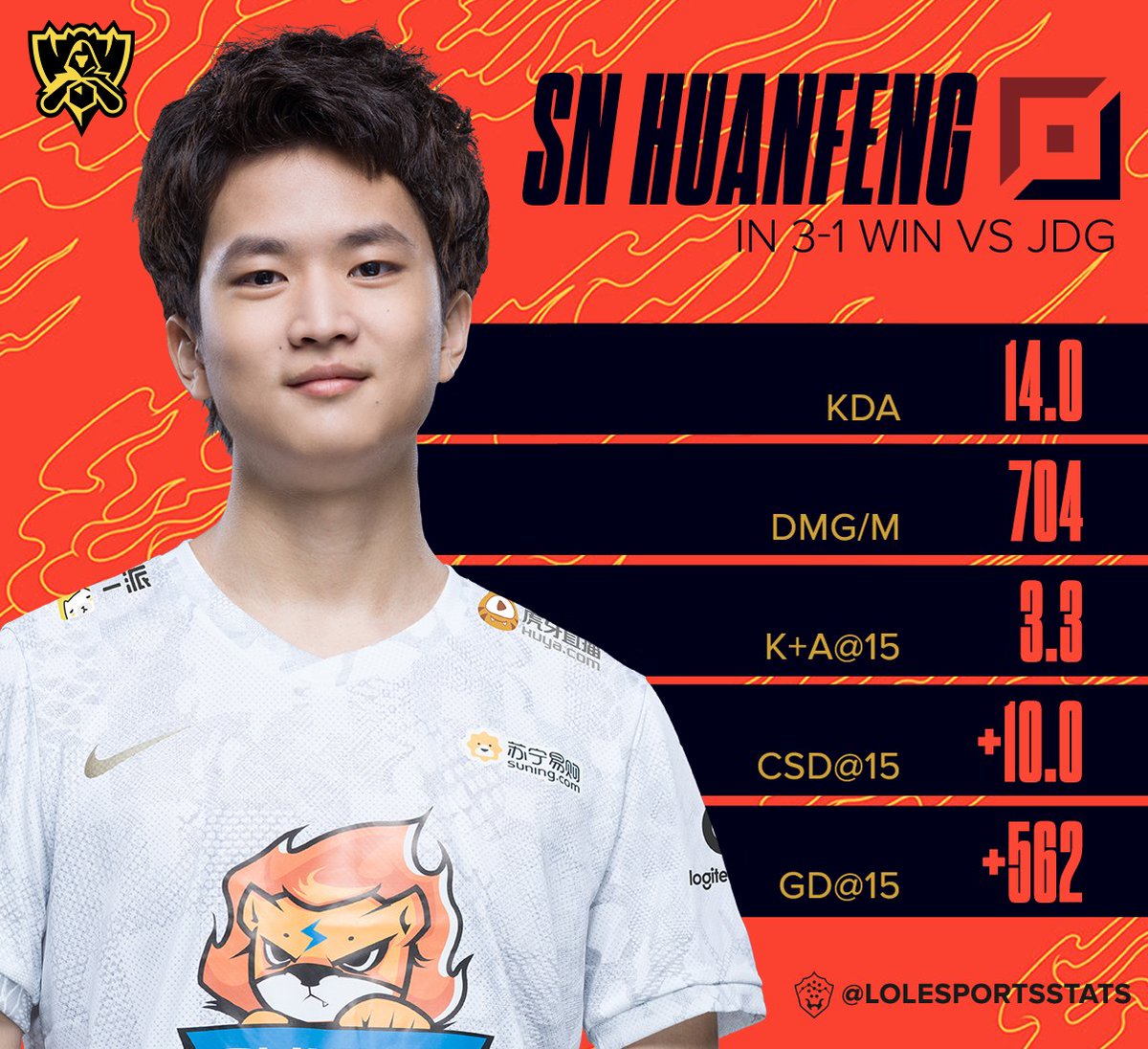 With Suning now having qualified for the Semifinals, they now await the victor between Top Esports and Fnatic, who play tomorrow (October 17). If the tournament favourites, Top Esports, were to win this would set up a sick match-up between huanfeng and Yu “JackeyLove” Wen-Bo, which surely would be a welcome sight. You also can't forget the possible match up of old teammates in Hung "Karsa" Hao-Hsuan and Hu "SwordArt" Shuo-Chieh from that old Flash Wolves team.