Find out what’s to come in Rogue Company Season 2

Rogue Company is a free-to-play third-person tactical shooter developed by Hi-Rez Studios. Rogue Company is unique in that it is also a Hero shooter. Players choose from a selection of rogues, all with their own set of distinctive abilities.

Rogue Company has been out for about half a year now, but it seems as though they were just getting started. Season 2 looks to be packed full of exciting new content. Season 2 will launch with a new Rogue, map, game mode, Battle Pass, and more.

This past Saturday, the Rogue Company team held an hour-long Update Notes Show highlighting everything to come in Season 2. Let's go through some of the awesome additions players can expect when Rogue Company Season 2 goes live in early May.

Mack is a big-bodied Justicar agent that plays the Defender role. Mack’s Passive ability, Standard Issue, allows him to start the game with 25 armour. Usually, this perk costs a whopping $12K to unlock. Additionally, Mack’s armour regenerates after achieving a down. Combining Mack and Dahlia is sure to become the meta thanks to this ability.

Mack’s main ability, Light Bomb, is basically a giant flashbang. Mack places a small device that launches a flashbang into the sky on activation. Any enemies inside the radius will be blinded.

Mack comes with a new primary weapon and a new melee weapon. Mack’s Conviction LMG is set to be one of the best guns in the game. It deals high damage and has a 70 bullet mag when upgraded. The Conviction LMG is unique in that it starts off inaccurate but gains accuracy as more bullets are fired. Mack’s melee weapon is a massive two-handed claymore; the perfect representation of Mack’s persona.

Finally, Mack comes with the following gadgets and perks:

Mack is guaranteed to shake up the meta with such a dominant overall kit.

Rogue Company has some of the best maps in the genre, and they just keep coming. The developers drop a new map every few weeks, and the quality is never lacking. Season 2’s feature map is called Breach.

Breach is designed around the training facility players are introduced to when they first start up the game. Breach incorporates a ton of Rogue Company lore.

Justicar, the police faction of the Rogue Company world, “breached” the Rogue Company training facility in search of the notorious Rogue, Dima. Based on the maps’ current appearance, Dima did not go quietly. It’s been revealed that Dima escaped, but another Rogue, Ronin, was captured in his place.

Breach has a nice mix of indoor and outdoor environments to battle in. Also, Breach is the first map to introduce destructible cover.

This new game mode is being hyped up big time by the Rogue Company team. Rogue Company’s lead designer, Scott Gandhi, is on record saying, “King of the Hill is the best mode we've ever come up with. Period.”

Expectations are high after the recent release of the popular Dodgeball limited-time mode, but it sounds like King of the Hill may be even better.

Rogue Company
@RogueCompany
"I'm just going to go ahead and set the stage for everybody now. King of the Hill is the best mode we've ever come up with. Period." - @ScottGandhi 2021
5
60

Rogue Company Season 2 will release with another 50 tier Battle Pass. In it is a rousing mixture of new skins, weapon wraps, emotes, and more.

Ronin, Lancer, Glitch, and Phantom are the four Rogues receiving feature skins in the Battle Pass. Ronin, Lancer, and Glitch will be getting brand-new models. Phantom’s skin is a bit of a recolour, but it will come with a new set of voice lines, helping it to stand out on its own.

Rogue Company undoubtedly has some of the best emotes in the game. The Season 2 Battle Pass reaffirms that. Toward the end of the pass, there’s a Legendary emote that the developers could not stop smiling about on the Update Notes Show. One developer, PrettyHair, said that he thinks Rogue Company can go toe to toe with Fortnite when it comes to emotes — and he might be right.

Kriimaar â€¢ Rogue Company News & Leaks
@KriimaarRC
Battle Pass Overview Update 2 | #RogueCompany
This should be the last update, sorry for the post spam lately, I don't want to annoy you with it. :(
Added:
âž¡ï¸ Title Names above their Icon.
âž¡ï¸ Marked the "Free" Tiers.
âž¡ï¸ Replaced Icons with better ones. 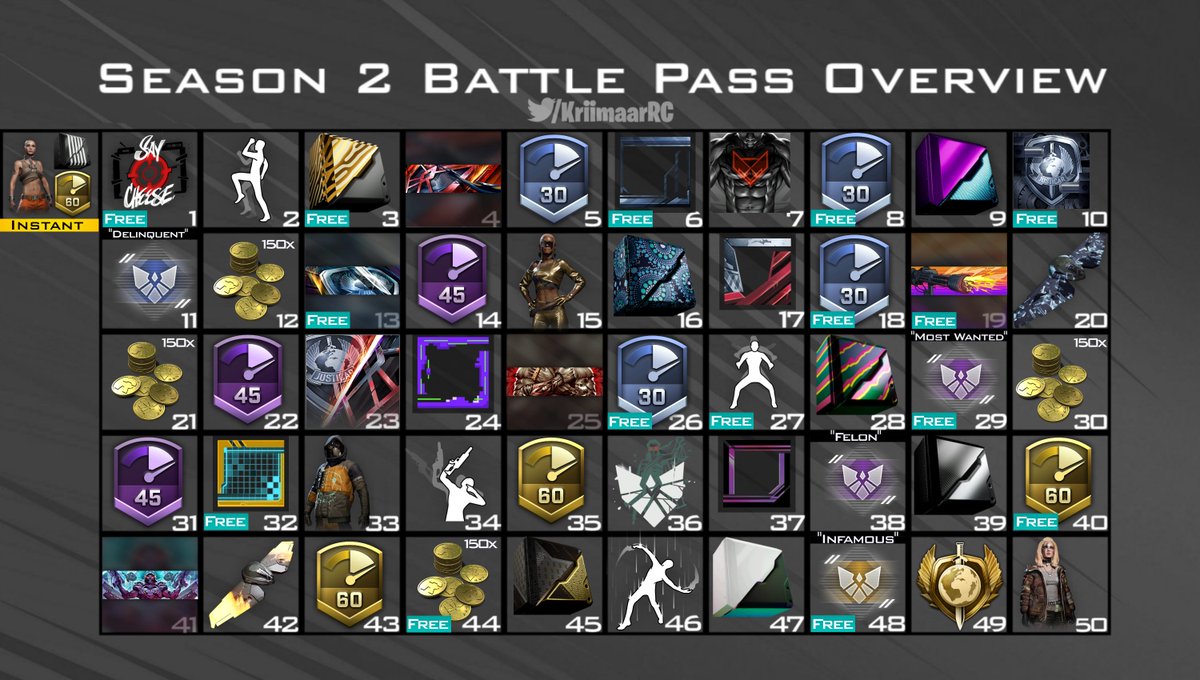 Starting in Season 2, Rogue Company will be rewarding players for simply logging in and playing the game. Each month, players can earn a variety of progressive awards each day they log in. These rewards include Reputation, XP Boosts, weapon wraps, and even Rogue Bucks.

This system will be very player-friendly as well. Players do not need to log in on consecutive days to earn the rewards. Logging in a total of ten different days in a month’s time will earn all of the available Daily Login Rewards.

Season 2 aims to give players a lot more to strive for and accomplish. One way the developers hope to achieve this is through Season Challenges and revamped Daily Contracts.

New interesting challenges will unlock each week. Players can complete these challenges to unlock Reputation and earn Battle Pass XP. Daily Contracts will work similarly to how they do currently, but will now offer Battle Pass XP.

Season 2 will lower the time-to-kill (TTK) across the board. The developers defend this change with the explanation that “gunplay is king.”

All weapons have had their body shot damage increased slightly. Almost every gun should now kill in one less bullet.

The developers hope this change will help to prioritize gunplay and put less of an emphasis on gadgets and other forms of combat.

Kriimaar â€¢ Rogue Company News & Leaks
@KriimaarRC
As i said there is a new "Rogue Ban" System, this will be implemented in #RogueCompany's Ranked Mode in Season 2.
During the Rogue selection a Player from your Team and a Player from the Enemy Team can choose a Rogue which can't be used the entire Match.
ðŸ“¸: @ScottGandhi
12
102

Ranked Mode will be getting some improvements and adjustments in Season 2, including a new feature called Rogue Bans.

This should spice up Ranked Mode and add another element of strategy. Is there one Rogue that hard counters your team comp? Ban them. Maybe you know a player on the other team is a one-trick and only good at a specific Rogue. You can ban that Rogue and force them to play another character. This kind of strategy will make Rogue Bans a fun and interesting feature of Ranked Mode.

Additionally, to the delight of many, Rogue Company will be lifting the rank restrictions on parties. A common complaint with Ranked Mode in Season 1 was how difficult it was to play with friends. In Season 1, players more than five ranks apart were unable to party up. This strict system made playing with friends impossible at times. Season 2 will lift this restriction.

Season 2 will bring some much-needed balance to a handful of Rogues.

Further balance adjustments include changes to the Tenacity perk. Tenacity, a perk that provides explosive resistance, recently had its cost and effectiveness nerfed. In doing so, a pretty annoying explosives meta developed. In Season 2, Tenacity will return to its old ways, providing 40% explosive damage reduction with a cost of $8K.

As the Rogue Company slogan says - save the day, look good, get paid. Get ready for an action-packed update when Season 2 goes live in early May.