Is Riot Games working on a new title that would be a social deduction crossover between Among Us and League of Legends?

Riot Games is keen to extend its reach into the world of esports as the developer has teased an Among Us x League of Legends crossover. While this doesn't quite mean we'll see Seraphine blasting off into space for a round of Cluedo, Riot has hinted at its desire to move into the world of social deduction games.

Despite Among Us coming out in 2018, the murder mystery has had a huge resurgence in the midst of the coronavirus pandemic. Some of the biggest streamers around have been getting to grips with this outer space favourite, and it looks like this has caught the attention of Riot Games.

Now, the developers want a slice of the slaughter and clearly have their eyes on the prize.

Team Secret
@teamsecret
Did... Riot just tease a League of Legends x Among Us crossover? ðŸ˜³ 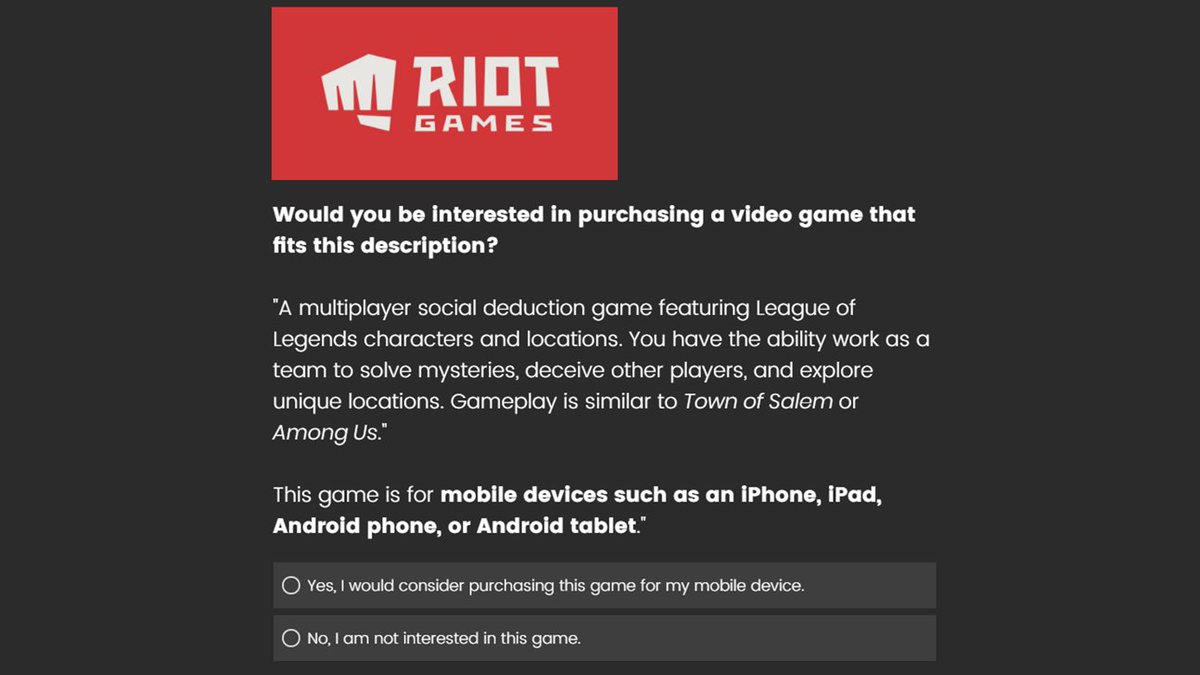 Posting on Twitter, @teamsecret showed off what seems to be a survey from Riot, asking players if they'd want to see a game that fits the following description: "A multiplayer social deduction game featuring League of Legends characters and locations". The proposed title would involve working together to "solve mysteries" and "deceive other players". If that doesn't scream Among Us, we don't know what does.

Importantly, we should note that this is probably just market research into how popular this kind of game would be. The idea sparked plenty of interest, but not everyone was impressed. One disgruntled Among Us fan wrote, "Crossover or more likely an Among Us rip off using LoL characters and map that gives no benefit to the Among Us creators".

With the League of Legends World Championship over for another year, Riot devs have a little more free time on their hands. We say that, but it's also important to remember the company has to juggle LoL, with offshoots including Legends of Runeterra and Wild Rift, as well as non-related projects like VALORANT.

Of course, it didn't take long for critics to accuse Riot of cashing in other another franchise's success. Despite VALORANT becoming a huge hit since its release early this year, that hasn't stopped the wider community calling out the comparisons between the first-person shooter and Respawn Entertainment's Apex Legends.

Considering InnerSloth is only a small team of three, it's amazing to think what a gaming giant Among Us has become. Putting the power of Riot and its expanded resources behind a social deduction title and it's hard to imagine how big it could become. .

We've already seen Among Us overtake League of Legends in the Twitch charts, so picture a similar title that brings your favourite Legends in for a murder mystery. For the time being, we'll park this one in the maybe pile and keep our fingers crossed that Riot can do the boom in social deduction gaming justice.