A new PS5 upgrade feature will now alert players if they're playing an old PS4 version of a game instead of the next-gen one.

It seems the PlayStation 5 is the gift that keeps on giving as players have just uncovered a new feature hiding in plain sight for Sony's next-gen superstar. As the PS5 muscles into the already crowded console market, it's the end of an era as the fan-favourite PS4 bows out. You've given us some great memories with the likes of Red Dead Redemption II, Marvel's Spider-Man, and God of War, but all good things must come to an end.

That doesn't mean you should simply chuck out your beloved games. Thanks to Sony finally expanding on its backward compatibility, the "overwhelming majority" of PS4 games can be played on your shiny new PS5. Sony and Microsoft are locking horns with their next-gen systems, however, the PS5 is once again edging ahead of the Xbox Series X and Xbox Series S. With the PS5 being able to play upgraded versions of some classic PS4 games, the PS5 upgrade feature will now warn you if you're about to play the PS4 game.

What is the PS5 upgrade feature? 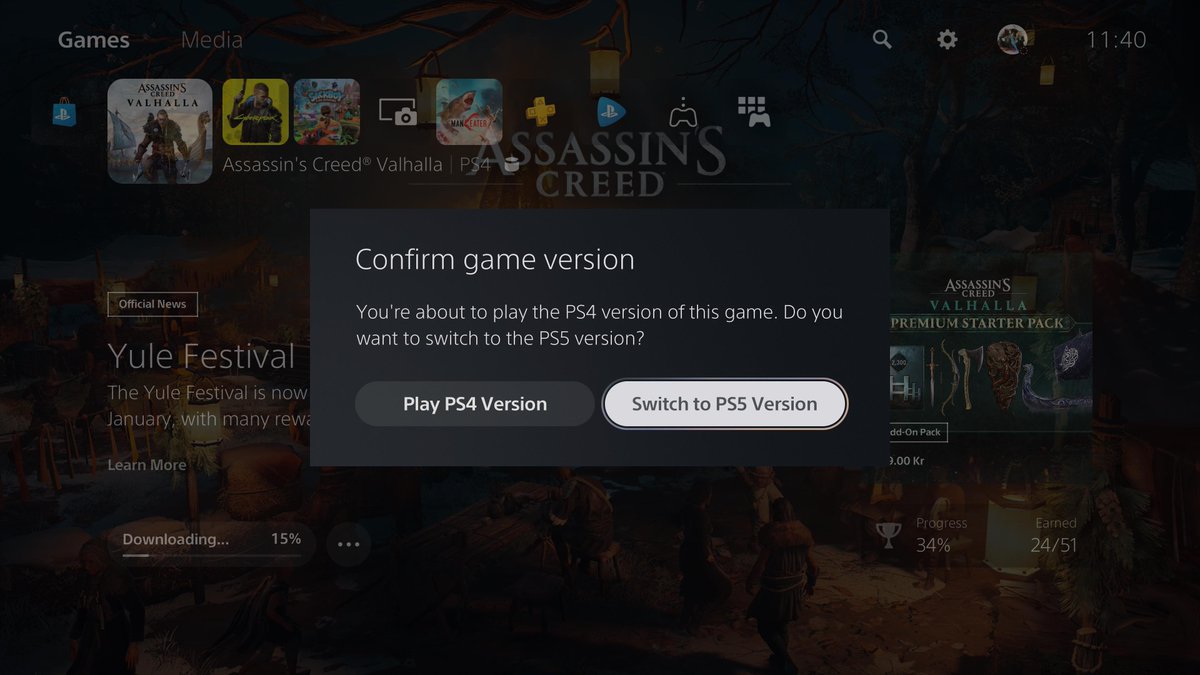 The PS5's launch in November was accompanied by huge games including Call of Duty: Black Ops Cold War, Marvel's Spider-Man: Miles Morales, and Assassin's Creed Valhalla. With all of the above falling into a weird limbo between consoles, most developers included the option to upgrade to PS5. Boasting improved graphics to make the most of the console's visual punch, it begs the question - why anyone would want to play a PS4 version when the arguably superior PS5 one is ready and willing?

Posting on Twitter, @Tidux pointed to Assassin's Creed Valhalla when they booted up their copy on the PS5. With a handy pop-up, Sony reminded the player they were about to jump into the PS4 version, then asked if they wanted to switch to the PS5 upgrade. It's a welcome addition considering the sometimes confusing PlayStation home screen makes it a little too easy to flick between games without knowing what you're doing.

Aaron Williams
@Elvis_Depresly
Playing Spider-Man remastered has got me like: 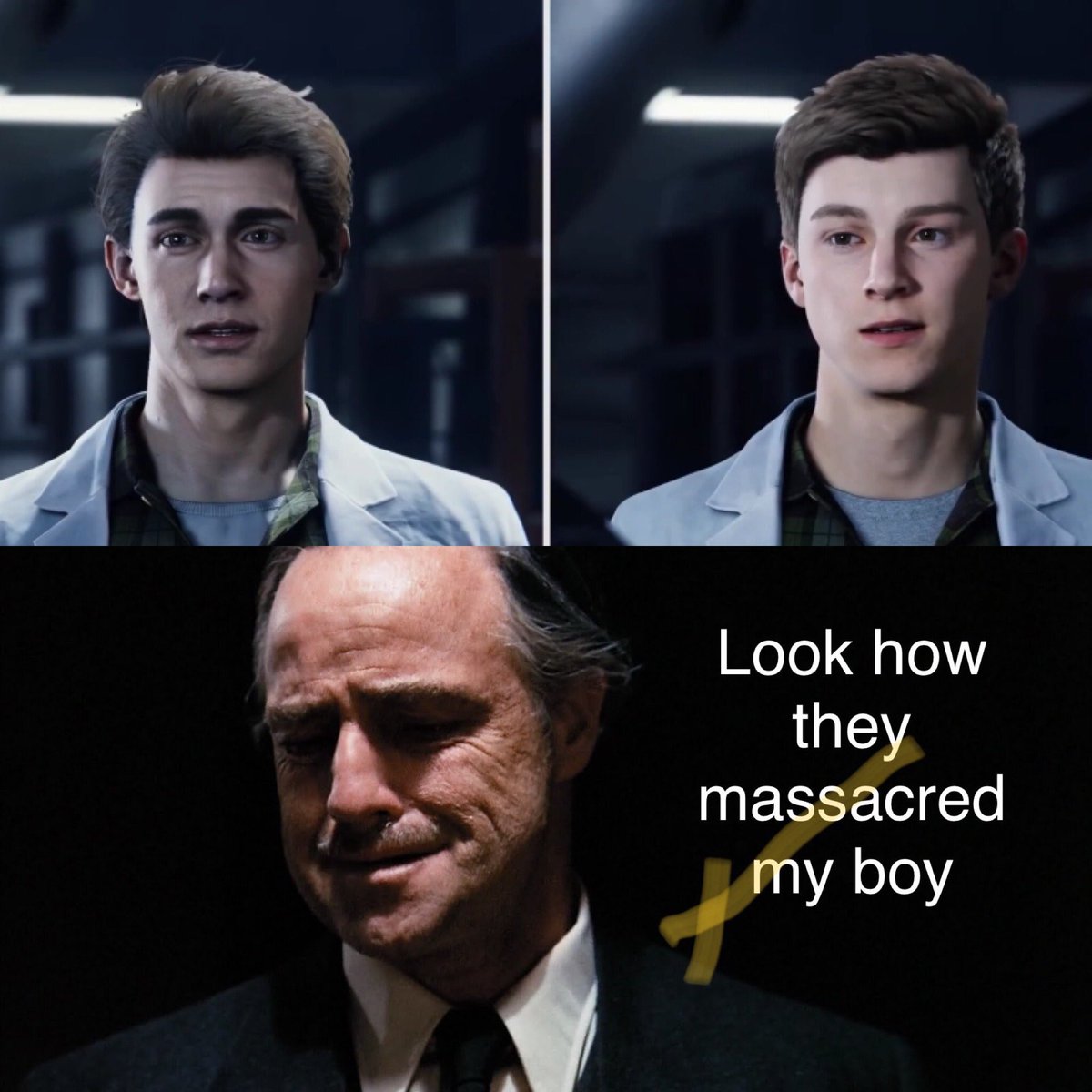 The PS5 upgrade feature has nixed the issue of not knowing which PS4 games are and aren't eligible for an upgrade. Considering developers spent so much time tweaking their games and making sure they could run on both current and next-gen consoles, they're likely fuming that not everyone is making the most of PS5-capable games. Also, when you've spent that amount of money on your PS5, you'll want to play the best version of a game that you can.

Not every game will be given the boost it deserves, though. Insomniac cleverly bundled its remastered version of 2018's Spider-Man in with the Ultimate Edition of Miles Morales. Sadly, your old PS4 copy of the game will play pretty much the same on the PS5 unless you've splashed out on the remastered version. Microsoft has already overcome the upgrade hurdle thanks to its Smart Delivery system automatically installing the "best" version of a game. Sony isn't quite there with the PS5, but hopefully, this latest move is a step in the right direction.

All we need to do now is address the elephant in the room and the impending release of Cyberpunk 2077. Although the current-gen version has largely been panned on consoles for not living up to its own graphics hype, CD Projekt Red has promised the next-gen upgrade will look just as it does on PC. A fair few are holding off on buying the sci-fi shooter until it's available on PlayStation 5, so we'll have to wait and see if the upgrade is worth the wait. At least Sony will now tell us which one we're playing.

LATEST GAMING NEWS
More
Console
PS5 Update Will Enable USB Storage Support
You asked for it, and you've finally got it. Gone are the days of only being able to install Call [ ... ]
Console
People Can’t Work Out What Colour The New Nintendo Switch Is
Was the dress blue and black or white and gold? You might remember back to the baffling colour craze [ ... ]
Console
Gamer Discovers Way To Play Music On Nintendo Switch Joy-Cons
Over the years, we've seen some weird and wonderful controllers and peripherals, with Nintendo arguably [ ... ]
Console
Here’s Everything Coming To PS Plus In April
When you've finished playing practical jokes on your partner, siblings, and co-workers for April [ ... ]
Console
New Sony Patent Hints At PS1 Backwards Compatibility
Old console games are an enchanting paradise. Often discarded due to advancement in technology with [ ... ]
Console
Xbox Live Gold Will Soon No Longer Be Required For Party Chat
More good news for Xbox players! After the recent announcement that an Xbox Live Gold subscription would [ ... ]
Console
Gamer Swaps His PS5 For A Nintendo 64
The debate of which is the best gaming console of all time rages on. Is it the SEGA Mega Drive [ ... ]
Console
Microsoft Gives Update On Potential Xbox VR
In the battle of the next-gen systems, Microsoft and Sony have once again locked horns. While Nintendo [ ... ]
Console
PlayStation 5 Hack Stops Your Console Running Out Of Space
While the launch of the PlayStation 5 last December has largely gone without a hitch, that hasn't [ ... ]
Console
The Switch Is Officially Nintendo's Second-Best-Selling Console
In just four years, the Nintendo Switch has climbed the ranks of the gaming giant's sales and is [ ... ]
Console
Xbox Confirms 20 Bethesda Titles That Will Be Coming To Game...
Microsoft is rolling out the green carpet for Bethesda, as the house that Xbox built confirms 20 new [ ... ]
Console
Microsoft Finally Confirms Whether Bethesda Games Will Be Xbox...
The writing was already on the wall, but now, Microsoft has confirmed what we all expected, with the [ ... ]
Console
Xbox Series X/S Will Soon Be Able To Play Google Stadia
There's finally some good news for Google Stadia, with the controversial cloud gaming service reportedly [ ... ]
Console
Breath Of The Wild 2 Theory Hints At Nintendo Switch Pro Release
Is that the clip-clop of Epona's hooves and the dulcet tones of an ocarina we can hear? With Zelda fans [ ... ]
Console
Batman Console Skins Turn Your PS5 And Xbox Into The Caped Crusader
Na na na na na na na, Batman. If you're comic book mad and want to show your love for the dark and [ ... ]
Console
Sony Creates Patent To Turn Bananas Into PS5 Controllers
The gaming world is no stranger to weird and wonderful contraptions, and as the console developing giants [ ... ]
Console
PlayStation Plus March Games - Are They Any Good?
Sony's PlayStation has been the go-to console choice for many gamers, and services like the PlayStation [ ... ]
Console
Sony Confirms New Virtual Reality System Coming To PlayStation...
Sony has officially announced the release of a new virtual reality system, which will be playable on [ ... ]
Console
PS5 Controller ‘Built To Last Only 417 Hours’
The PlayStation 5 next-generation console may not yet be able to support the likes of The Legend of [ ... ]
Console
TikTok User Goes Viral After Defacing Boyfriend's Xbox
For gamers, sometimes romance doesn't come as natural as the protagonists that we play. For girlfriends [ ... ]
Console
PS5 Users Are Reporting DualSense Controller Drift
After a pretty smooth launch last year - well, apart from Black Ops Cold War and Miles Morales crashing [ ... ]
Console
PlayStation Plus February Games - Are They Any Good?
The Sony PlayStation Plus subscription allows players to get free games, access several more exclusive [ ... ]
Console
Xbox More Popular Than PlayStation In The US
Alien vs Predator, King Kong vs Godzilla, Jedi vs Sith - society is full of battles for the ages. When [ ... ]
Console
Modder Creates World's Smallest N64 - And You Can Play It
They say the best things come in tiny packages, and when it comes to the world's smallest N64, we're [ ... ]
Console
Sony Is Already Offering A PS Plus Refund For January
It looks like Sony is getting off to a flying start in 2021 as it's forced to offer a PS Plus refund [ ... ]
Console
Ubisoft Games Set To Join Xbox Game Pass In 2021
If you have an Xbox but have never tried out the Xbox Game Pass, then you probably. For just a small [ ... ]
Console
KFC Console Officially Launched By Fast Food Giant
Have you lost your cluckin' minds? KFC (yes, the chicken restaurant) has just unveiled its own games [ ... ]
Console
You Can Now Emulate PlayStation 2 Games On The Xbox Series
Microsoft is back at the top of its game with the recent release of the Xbox Series X and Xbox Series [ ... ]
Console
Driver Accused Of Stealing PS5 Has Been Fired By Amazon
The struggle is real as we scramble to get our hands on a PlayStation 5 before December 25. To say Sony's [ ... ]
Console
Here’s Everything Coming To PS Plus In December
'Tis the season to be gaming as Sony rolls out its plans for the future with the PlayStation 5. [ ... ]
Esports Calendar
rocket league
RLCS X Spring: The Grid (NA)
It's North American's turn to score points for qualification to the World Championship. Matchday 5 - Round 1
rocket league
RLCS X Spring: The Grid (NA)
It's North American's turn to score points for qualification to the World Championship. Matchday 5 - Round 3
overwatch
2021 Overwatch League
Blizzard's OWL is back for the 2021 season! West Group
overwatch
2021 Overwatch League
Blizzard's OWL is back for the 2021 season! East Group
overwatch
2021 Overwatch League
Blizzard's OWL is back for the 2021 season! East Group
overwatch
2021 Overwatch League
Blizzard's OWL is back for the 2021 season! East Group
valorant
VALORANT Champions Tour
VCT 2021 features three levels of competition -Challengers, Masters, and Champions. Challengers is a regional competition and winners will qualify for the Masters. Korea Stage 2 Challengers - Decider Match
This website uses cookies
Cookies help us and our partners provide statistics. By browsing this website, you consent to the use of cookies in accordance with our Privacy Policy and Cookies Policy.
Accept & Close