Imane 'Pokimane' Anys has revealed the shocking number of bans she's given out thanks to inappropriate comments on her streams.

Being the world's biggest female streamer isn't as easy as it seems. It's not all opening cute gifts and having fans try to woo you. When it comes to Imane "Pokimane" Anys, she's no stranger to unwanted attention online, which has led the Twitch superstar and her mods to getting pretty slam-happy with the ban hammer. Pokimane has previously opened up about some of the weird and wonderful reasons she's given viewers the boot, but now, she's revealed the shocking number of bans she's dished out over the years.

Instead of focusing on the day-to-day running of her channel and giving us the right mix of gameplay and general life advice, Anys spends a tonne of time trawling through the comments and banning viewers that range from the offensive to the downright concerning. Although plenty of these are bots, there's an alarming number of accounts that belong to actual human beings. It turns out, a lot more of you have been slapped with a ban than first thought.

How many stream bans has Pokimane dished out?

During a March 31 Twitch stream, Anys once again turned to the questions of bans. While some think it's all she seems to talk about these days, Pokimane's ban streams have turned into some solid gold content that's helping her subscriber count climb nicely. Expanding on just how many accounts have been banned, a stunned Poki did the maths and explained, "There are a lot of bots. Normal users, maybe 350k. That’s not including bots. That’s crazy!" If that wasn't enough, she continued, "That is absolutely buckwild. Bots are 10 million-plus. What? Actually, what? Wow!"

Considering Pokimane "only" has 7.5 million followers on Twitch as the most-subbed woman on the platform, it's actually baffling to think she's banned far more bots than she even has followers. Coupled with this, the fact she's had to ban 350k humans is an alarming statistic. Also, think of the time and energy that's gone into trawling through all those messages that got someone banned - over 350k of them to be exact! 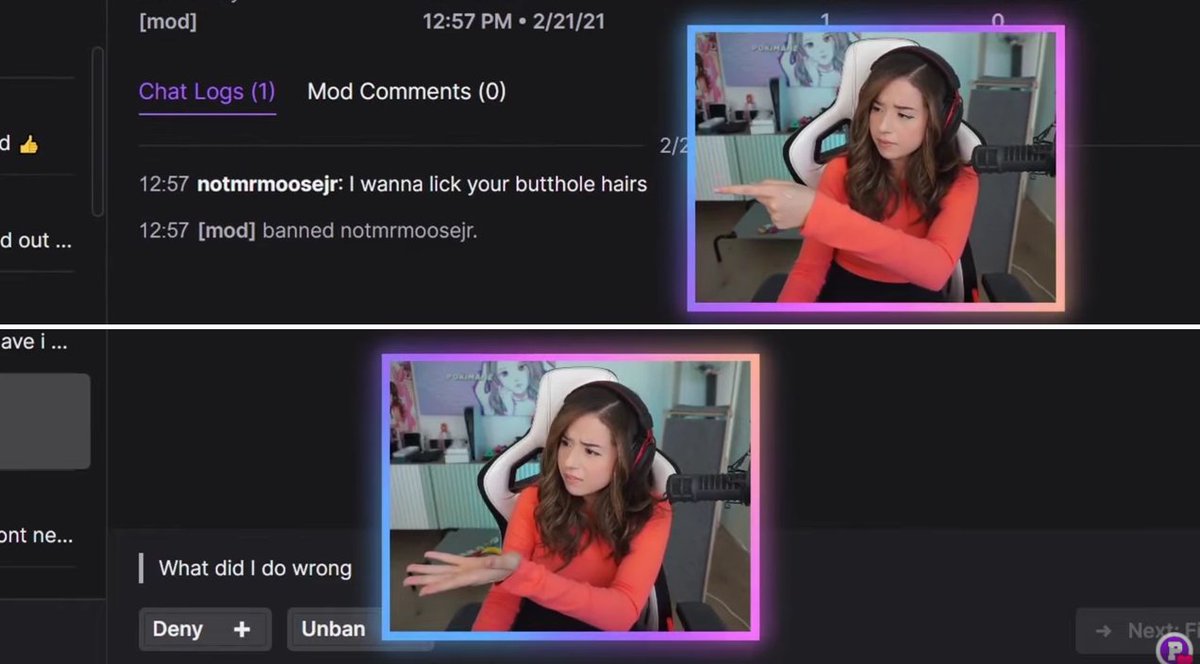 At the end of the day, Pokimane seems to take banning unwanted viewers in her stride. In a recent stream, she made a joke about some of the bizarre reasons she's had to ban people. Ultimately, she admitted there's a flaw in the system because there's nothing that stops BanFan236 sending her a tirade of abuse, being banned, then setting up an account as BanFan237. It's an issue that Twitch has been pulled up on before, but by the looks of Poki's latest stream, it's the bots everyone should be more concerned with.

Although it's undoubtedly not nice for Anys to be bombarded with this abuse on a daily basis, at least she's able to turn the negative into a positive and churn out some content from all these bans. It means she's at least making some money from all the hate she gets. With a new day, there's sure to be another wave of bans as that 350k gets even bigger. We'd like to hope that things would change, but to be honest, we're not going to hold our breath on this one.