Hero Pools gave us the perfect rotating door, so now teams have a perfect time

Throughout the 2020 Overwatch League season, teams have all peaked during a specific time frame, all twenty teams have benefited from a concept called “perfect time,” the idea that teams can exist in a dual state of good and bad simultaneously. Bottom teams in the league can quickly rise and look like top teams, while top teams can have stark drops in form and frankly look average or bland, while generally speaking throughout the wider scope of the season things have remained fairly normal. These teams exist perfectly within their allotted time, and because of their peak and valley performances, it’s incredibly hard to pin down exactly where they should sit in terms of how the teams rank.

To begin to explain this concept, we have to understand where it started and why it’s happening. “Perfect time” is a knock-on effect from the Hero Pool format introduced in Week 5 of Overwatch League’s 2020 season. Throughout the year, Hero Pools have artificially created metagame shifts through it’s randomly generated hero bans. Whether it is one-week rotations or two-week rotations, we’ve seen teams either set trends that force the field to follow or generally average teams peak given a specific set of circumstances. However, this begs the question - why isn’t this as severe with normal balance patches? Should we always see a metagame rotation?

Chengdu Hunters
@ChengduHunters
Oasis, WON.
King's Row, WON.
Match? WON.
For the first time in team history we beat the @Hangzhou_Spark! GGs! We're on a winning streak 🐼✨
Thank you to everyone who supported us in the regular season! Let's look forward to the Countdown Cup now.
#LetsGoHunt #OWL2020 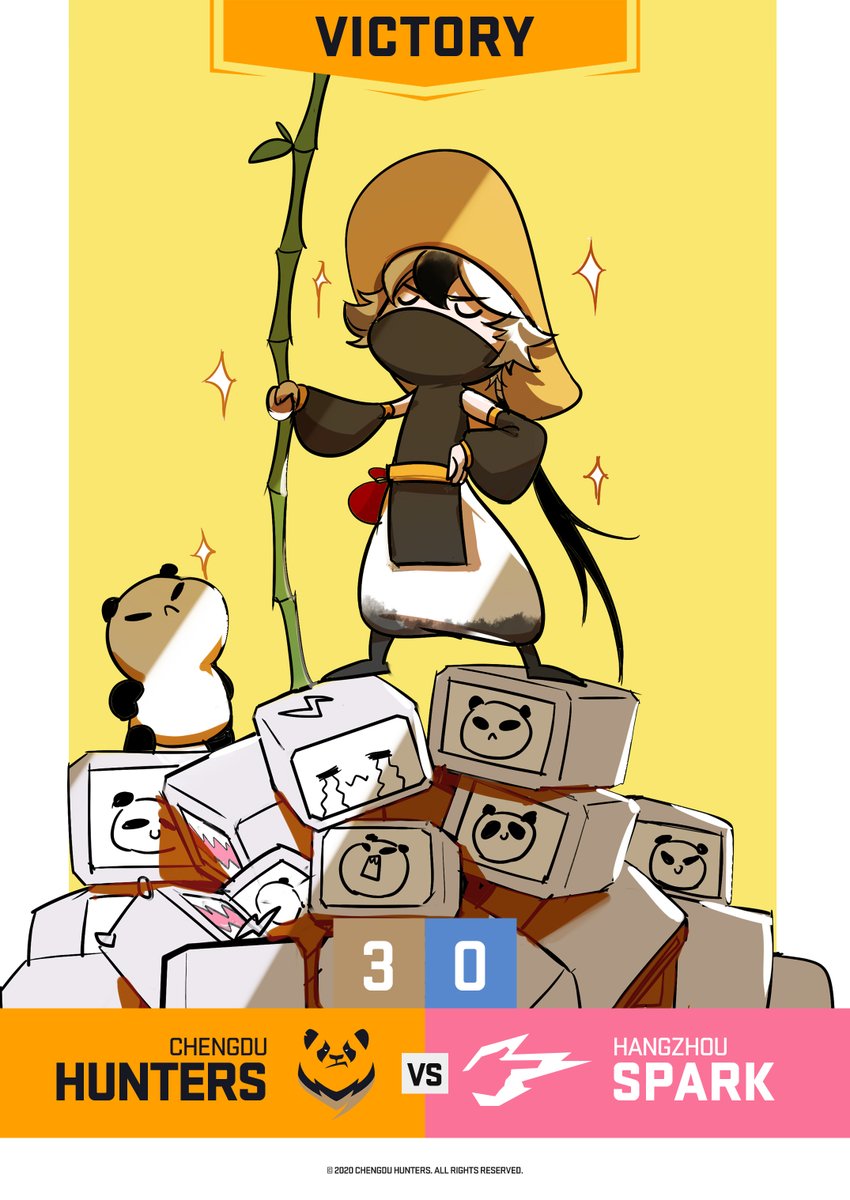 General balance patches were a slow-release system. We often saw teams rely on what previously worked until someone came along, would experiment with some new changes, and find something promising. This would lead to innovation at a smaller, more niche, level, and after another set of checks and balances, both socially and objectively, that more niche strategy could evolve into its own metagame.

If we look throughout Overwatch history, some of the largest changes in terms of metagames have come from new heroes being added or a massive rework or redesign to a core element to the game or a hero. Ana helped to give us the Beyblade metagame, Sombra became a viable support option and changed the pacing of the game, and Orisa took a bit more time but we all remember double-shield compositions and protect the Bastion. The list goes on and on. The Mercy rework comes to mind immediately as something that shifted the game nearly immediately, giving us the Moth metagame, and the aggressive changes to Genji immediately made him a metagame staple in a matter of weeks.

What Hero Pools have done is taken the breakneck pace of these large scale changes to the game, through the additions of heroes or large scale changes to preexisting heroes, and implemented them on a week-to-week basis. It’s no wonder teams can exist perfectly within one week and look dreadful the next, it might as well be a different game entirely.

So yes, your favourite team might look fantastic right now, congratulations by the way, but that success could be completely contextual to the game state they’re playing in. To find the true measure of a team’s performance, we have to look across the entirety of the season to properly measure a team’s given strength. That said, whether intentional or not, the league should be commended for allowing all twenty teams to have a road to participate in playoffs. With how up and down the league has been along with the COVID-19 global pandemic, it’s a nice gesture seeing how chaotic the 2020 season has been. It also wouldn’t feel right with how much perfect time has influenced the standings, especially recently.

Chengdu Hunters have created their metagame in Asia with their Wrecking Ball and Mercy centric compositions. This has been so popular that the working theory is that much like Torbjörn seemingly became popular overnight, so to did the Hunters’ composition which has thrown the region for a loop. This better explains how difficult it is to judge the Asian region, in particular, as it heads into the Countdown Cup.

With the June 16 patch that brought Genji back into the fold, we had several teams shoot up the rankings including teams like the Toronto Defiant who was finally able to put pen to paper with Genji specialist Brady "Agilities" Girardi. Similarly, the Washington Justice found a home for rookie DPS player Lee "TTuba" Ho-Sung who has proven to be more than just a Pharah player and piloted the Genji well in their stunning upset over the Los Angeles Gladiators. pushed a consistently solid team like the Guangzhou Charge over the edge to win the Summer Showdown.

While we can look at the 2019 and 2020 season and see the contrasts almost immediately, there is one avenue where the two seasons collide, the fact that information given from the players and teams isn’t completely true. If we remove the obtuse and verbose filter from that, look back at the GOATS metagame. It was incredibly difficult to judge certain players based on their performance because the dominant strategy had them playing outside of their established hero picks. DPS players were playing Zarya, some played Brigitte, and that skews certain players in the eyes of potential teams for the future. Along that same line, players and more importantly teams this season have had to throw out the script and try and decode the best possible ways to handle these rotating metagames as they come through the Hero Pool format’s revolving door.

Again, separating ourselves from our opinions on Hero Pools, none of this is “bad” inherently or by any definition of the word, this just gives us an example of how “perfect time” can impact not only how we view teams but how they and their players are ranked.

With that in mind, would it be fair to have any form of cut-off this season for playoffs? It would be incredibly disappointing if, for instance, a team like the Charge who weren’t able to find their perfect time during the Summer Showdown, subsequently don’t earn their three added regular-season wins, and narrowly miss qualifying for the playoffs. An obvious contender in Asia would miss their chance at the title, due to simply not hitting the Overwatch meta equivalent of blackjack.