In some ways, the Overwatch League community is separated, playing in different regions and time zones, communicating in different languages, and consuming different stories despite watching the very same league. As two cities divided by a body of water, there are ways that allow fans to traverse and converse with the other communities, missing key puzzle pieces to the discourse of global Overwatch esports.

Fortunately for us, a couple of individuals with enough insights and language skills have taken it upon themselves to become informational bridges, bringing insights from the other part of the Overwatch community across to create an international connection.

One such communicator is the Chinese Overwatch League shout caster and correspondent for the Shanghai Dragons, Gai "Alan" Yandahan. The previous coach for Phantom Wizard (a former team of Boston Uprising main support Hong-gyu "Faith" Kim) sat down with GGRecon to provide further insights into the Chinese Overwatch scene.

Some might recognise you as a talent for the Chinese Overwatch League broadcast who also shares insightful information about your scene on your Twitter. However, few Western fans may know of your style. If you had to compare yourself with someone or a combination of the talent on the English speaking broadcast, what are you like on air?

Mitch is my favourite! I regard myself as more of a PBP caster even though there are no fixed roles in the Chinese scene. I started my style with a fast-paced PBP, which I still enjoy now. At the same time, I am trying to make my casting more amusing besides exciting.

Is there a specific change you are looking forward to for the FlashOps event that you can tell us about?

One thing that is not from me but really makes me laugh is about the Torb. There will be something really WILD about Torb, maybe broken lol.

Overwatch League
@overwatchleague
The balance lies in their hands ðŸ¤
On 3/14 at 12pm PT, this panel of esteemed @PlayOverwatch experts will sit down and determine the rules for our upcoming Experimental Card Tournament.
ðŸ“º 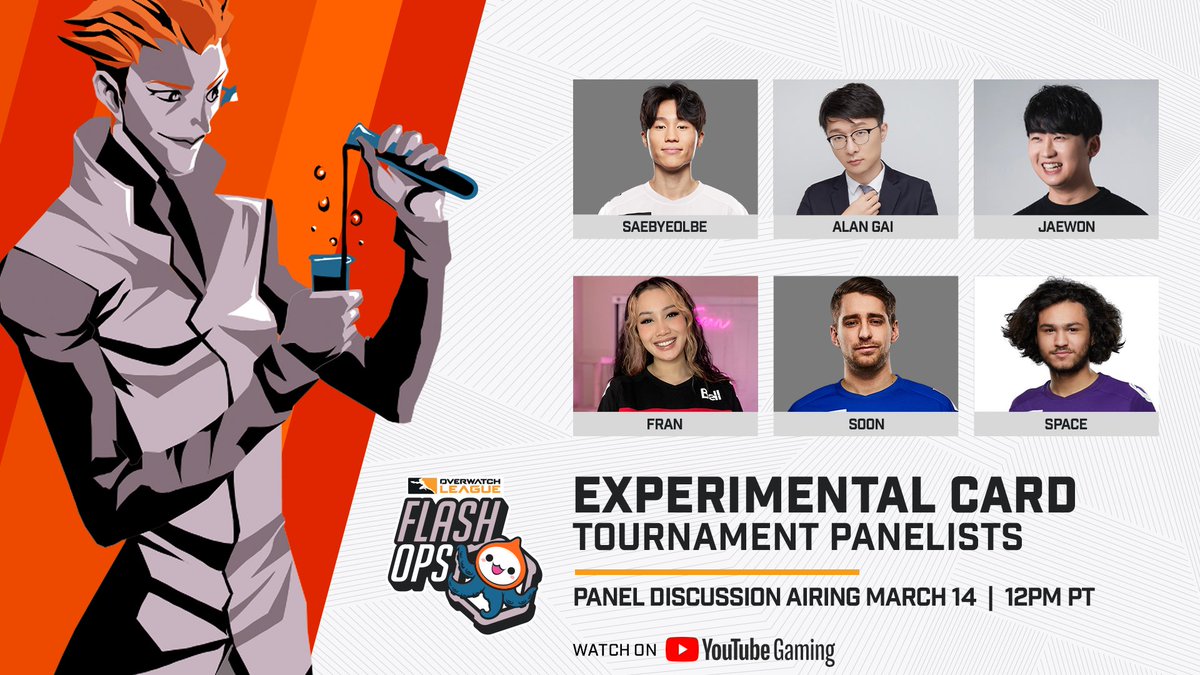 How does Chinese fandom organise generally? Do supporters of franchises keep to themselves, or are there big message boards or forums in which everyone converses like Reddit?

So generally speaking, there are two or three communities where people would converse in, but I think the size is much smaller than Reddit. For comp and esports, I think NGA (a message board) is a rather active community.

How much does the Chinese audience embrace the localisation aspect of the Overwatch League? Do people mostly because of fans of the players or of the team because of the region that they play for?

I think Chinese audiences have an easy understanding of that since LPL is also doing localisation based on cities. But to be honest, it did not work very well, as far as I can say. There are few bonds between players and cities. It’s still a long way to go that a fan can cheer for the team just due to there being a city’s name in it. Yes, mostly fans become fans because of the players and the teams, which is a group of players, not the team with a city’s name labelled on it.

Which team has the biggest fanbase, and why do you think that is?

Chengdu Hunters. The full-Chinese roster means a LOT for a big fanbase. Even though there are Chinese players in GZC/HZS/future VAL, Hunters still owns the local market.

How successful is Overwatch in China in the grand scheme of things? How do the streaming numbers of both the broadcast and individual streamers compare to other games?

Not looking good. The viewership of OWL 2020 is, of course, promising, but if you compare it to LoL or even LPL, it’s still way behind. And as for the game itself, it is even tougher for streamers or content creators, mostly due to the lack of new content (heroes, maps, etc.). Also, even if you put LoL aside, PUBG is still a thing in China, especially in streaming. And games like CrossFire, TFT, DNF, and Apex Legends are doing better in streaming.

What was the reaction of the Chinese audience to the information shared about Overwatch 2 at BlizzConline?

Generally bad. Even though there are some solid updates about where the devs are going. But the major hope for Chinese audiences is new heroes, maps, or CG. And there are no concrete dates or timing of alpha or beta tests. There are some positive voices about the information, especially after Cyberpunk 2077. But the news isn’t enough for the Chinese audience.

Unfortunately, due to COVID-19, China hasn’t been able to enjoy a homestand yet. Do you have a guestimation how successful they would’ve been in season 3, had they been possible?

It’s going to be something different, especially for the fans. All four teams plan their homestand really great, and LAN is always something meaningful to Chinese fans. I don’t think it will change the grand scheme of the game itself, but it is definitely different for the audiences.

Shanghai Dragons
@ShanghaiDragons
As we draw closer to the beginning of our season, please welcome @AlanGai_ as our newest correspondent and content creator!
#ShanghaiDragons #Breakthrough 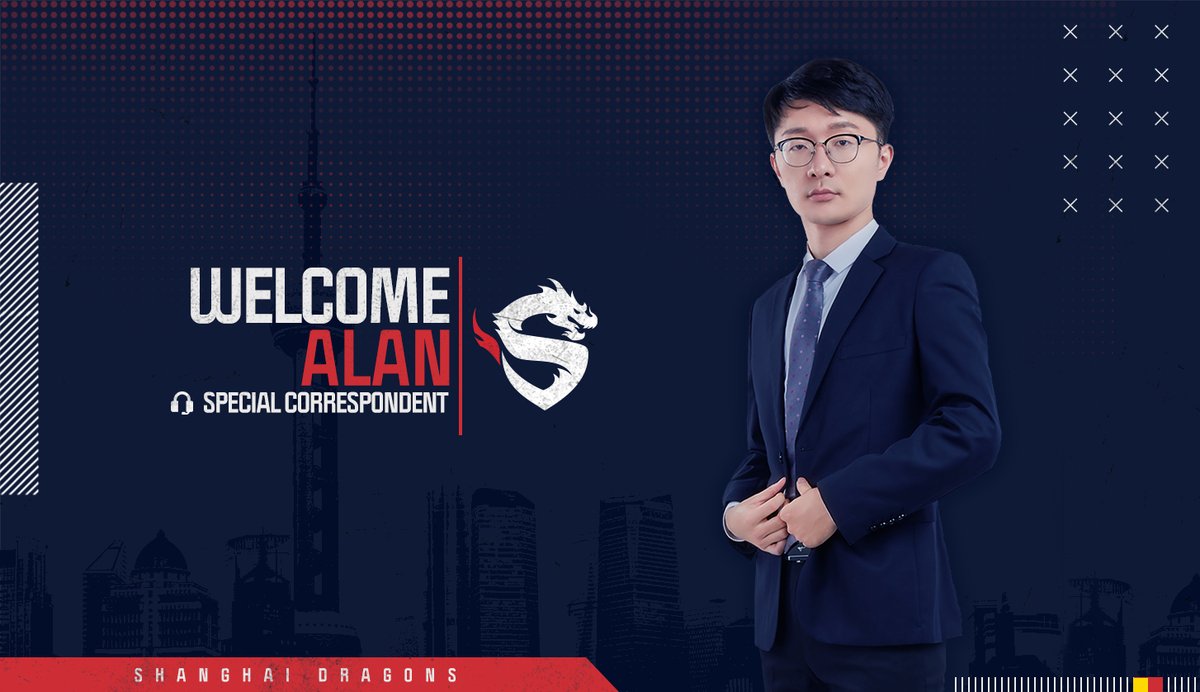 The marketability of teams who can’t directly communicate with their fanbase due to a language barrier has been a frequent topic in the Western scene from the start. How do Chinese fans perceive full-Korean teams like Shanghai Dragons? How much does the Chinese audience care about the competitive success of their team?

It takes time and sacrifice to accept that, actually. Especially for Dragons, who changed from a full-Chinese roster to a full-Korean roster, there was a lot of debate about the change and still some debate even now. I think the competitive success means a lot, and that’s why the Dragons still have a solid fanbase. But there are certainly also a big part of the audience that wants more Chinese players in the field or in a specific team.

In contrast, a team like the Chengdu Hunters, especially in season 2, enjoyed a lot of attention from Western audiences for their unorthodox playstyle. What’s the perception of Chinese fans about the Hunters? Do they enjoy similar cult status for their novel strategies?

Chengdu Hunters’ story in the 2019 season is basically an underdog story. The perception is quite low, and to be honest, my personal perception is also quite low back then. So a not bad regular season and some innovative play styles are really making their fans happy and more fans hopping in. And yes, Chinese audiences are really hoping for novel or even weird strategies, compared to mirroring.

I think most people agreed that it is a brave try. Nenking is an org who didn’t step into esports before, and they showed their determination and a will to build long term success in esports. But generally, due to COVID and other logistic issues, the international roster-building encountered a lot of problems, especially in 2020. And the pattern now is that they will step a bit back as far as I can see.

In the West, two to three blocks of practice are the norm, with individual ranked play adding to the workload. Do you have an idea of how much and in what structure teams scrim and practice? Do you see significant differences in how practice happens in the Asian region? Do you have any idea how often Chinese teams scrim top Korean and Chinese Contenders teams?

Workloads are alike, I think. There has been some saying that Korean teams tend to practice a TONNE more. But from what I learned, yes, Korean teams may sometimes try three blocks for seven days a week, but it only happens sometimes in some teams. Actually, most OWL teams and top contenders teams in Asia realised that too much workload can be bad. Right now, the Chinese scene is quite connected with the Korean scene, where a lot of scrims between them, including OWL and Contenders team, especially since Team CC shows strong performance recently.

What was the perception of Valiant’s move to the Asian region and the alleged roster that they signed?

Similar perception to the Hunters in 2019? Jokes aside, I think the move to Asia is something to debate. On one hand, it puts the former Valiant players in an awkward timing and position, which a lot of their fans in China felt bad for. On the other hand, it did provide an extra opportunity for Chinese players to enter OWL. Some fans may think that the opportunity is kind of a dilemma since it could be a 0-16 for the next season. But a chance is a chance in the end. In the alleged roster, there are some players that are really popular in China, like [Liao "MoLanran" Yang] and [Zhang "Highbee" Zening]. There are some players who are in the picture but not in a positive way, like [Cai "Krystal" Shilong]. So, mixed feelings and mixed impact, I guess.

On English-speaking social media, there is the belief that Valiant are likely to be the worst team while Shanghai Dragons remain top dogs. The rest of the teams appear to be very hard to judge. Does the Chinese team have a clearer picture of the hierarchy in the Asian region? Is there a big disconnect in how the English-speaking community and the Chinese one evaluate teams?

No, I think apart from the common sense that Valiant going to be the worst team, Chinese audiences can’t have a common hierarchy of other teams, even on who the best one is. The gap between the evaluation on teams are generally on Western teams in China since the Western division is not that often watched by Chinese audiences due to time zones.

Is there an archetypical style of player that’s popular in the Chinese scene, like the mechanical hyper carry or the calm leader?

Generally speaking, mechanical carry players are more popular. It’s easier for them to get fans attention and cheers. For the latter type, I think there needs to be more content from teams to make them shine.

Are there rookies that are particularly hyped up?

Team CC was an incredibly strong Contenders team last year. Would the scene have preferred them sticking together, or is spreading their talent across many teams welcomed?

Sticking together would be a fantastic thing for most fans, although most of them know that it is highly impossible.

What does the Chinese scene think about people like Weida "Diya" Lu, [Wu "Superich" Gengtuo], and Wang "NoHill" Fuxing not finding teams in Overwatch League this season?

All kinds of feelings there, especially after the recent stream of Diya talking on this subject. On one hand, Chinese audiences generally feel that Diya, Superich, and NoHill have the potential to enter OWL. But at the same time, when the VAL opportunities going up, there are also some voices that they should be careful with. Pity is the most common word we would use here, but still, a lot of fans hope that there could be other chances for them to enter OWL.

Is streaming a viable career path for retiring players? Do retired players stick around the scene and have success doing so?

Streaming is, of course, a viable career in China, but it really becomes tricky when you talk about a certain person or player. There are some popular streamers who are players or were players, like [Huang "leave" Xin], Diya, etc. And they can certainly make a living out of it, but I am afraid it’s only a small portion of it. Game’s popularity aside, the most important thing of streaming is about personality and creativity. And that’s not something that is critical when you are a player, and that’s why the most popular streamer in the Chinese Overwatch scene is not a pro or was a pro. Basically, most retired players will give it a try, but only a few of them can succeed.