The best players of the final round of OWL's playoffs.

The final four teams have been decided. The Shanghai Dragons and Seoul Dynasty will be representing the APAC region, and the San Francisco Shock and Philadelphia Fusion will represent NA at the Grand Finals weekend on October 8. The road was not easy, and it definitely wasn’t devoid of excitement, as all four teams have played a preview showdown against each other towards the end of the qualification bracket. When the meta was in such a volatile condition, these teams proved that they were more than capable of adapting, and overcoming the difficulties and challenges of their opponents. They convincingly earned their spots to take a shot at the championship.

But before you can look forward, you have to take a second to process the past weekend, to really understand the events of the final round of the qualifiers, and to give acknowledgement to the Elites of the Week.

The Return of the King… Kind of - Jin-mo "tobi" Yang

If you were to say back in 2019, that the Seoul Dynasty would finally crack the top four of the Overwatch League in 2020, I would not have believed you. If you told me they would do it after dropping Jehong "ryujehong" Ryu, their franchise player, I would have also not have believed you. If you said they would crack it with tobi as a starter on Mercy, the conversation would have ended there. But behold, the Seoul Dynasty is the second-best team from the APAC region, and they did it exclusively with tobi on Mercy.

For those unfamiliar with tobi's history, he was once hailed as one of the best Lucios in the world while on Lunatic-Hai, which at the time, made him one of the best if not the best main support in the world. However, his fatal flaw as the Overwatch League came into fruition, was that he just could not play a good Mercy. It was one of Seoul's many fatal flaws in their first season, and they did not have a capable Mercy player who could keep them alive against the better competition. Fans of the Dynasty waited forever for another Lucio meta to arrive so that they could see tobi once again dominate on the hero. But the competition caught up, tobi wasn't near the top, and again in this season, those troubles seemed to plague their regular season.

Come playoffs, however, Seoul found this incredible magic that skyrocketed them to the Final Four, utilising tobi's Mercy as a backbone. It was the first time tobi looked good on the hero, a long way from his performances in the inaugural season. He levelled up his play to give Seoul the fight they needed to best the rest in the region. It's also the highest placing tobi has had in OWL, making his resurgence worthy of being an Elite of the Week.

It takes a lot to come into the Overwatch League and smash the competition like ANS has. It takes even more to dip from playing Overwatch professionally for an entire year, and simply waltz back into the best team in the world, and thoroughly pound as if he never left. ANS's domination as a hitscan is unprecedented, match after match he's proved to be just another X-factor that keeps San Francisco at the top. But his recent performance against the Philadelphia Fusion on Sombra is what really gets him on the list for the week.

ANS's Widowmaker and Ashe are legendary, and the pure mechanics are fantastic, so when he busts out the Sombra, a more "cerebral" hero, and not only matches Fusion's Sombra, but surpasses him, now he's playing on another level. He provides as much value as he normally does for the team on hero he has barely played throughout the season. He's a further testament to how incredible the Shock is, and why they're the defending champions for a reason.

There are three definitive best Lucios in the Overwatch League - Jae-gon "LeeJaeGon" Lee, Brice "FDGod" Monsçavoir, and FunnyAstro. If there was an X-factor to keep the Philadelphia Fusion in contention with the best teams in the world, it's FunnyAstro. Seung-hyun "Ivy" Lee may have gotten the player of the match award for his absolutely stellar play on Hanzo, but it was FunnyAstro who set the tempo against the Washington Justice.

Astro made complete mincemeat out of the underdogs by scoring five environmental kills in the first round of Control Point, and earning Sound Barrier every minute and 25 seconds. A complete dismantling, people were worried that the Fusion might fall victim to the Justice's "dishonesty", but within a minute of the round starting, FunnyAstro claimed, "is this what you all were worried about"? Philadelphia will need performances like this to keep them in the running for the throne, and FunnyAstro is perfectly capable of doing it again.

Overwatch League
@overwatchleague
They don't call it the @ow_fleta deadlift for nothing!
Show your @TMobile MVP some #OWL2020 love, huge congratulations to this one of a kind talent 🙌 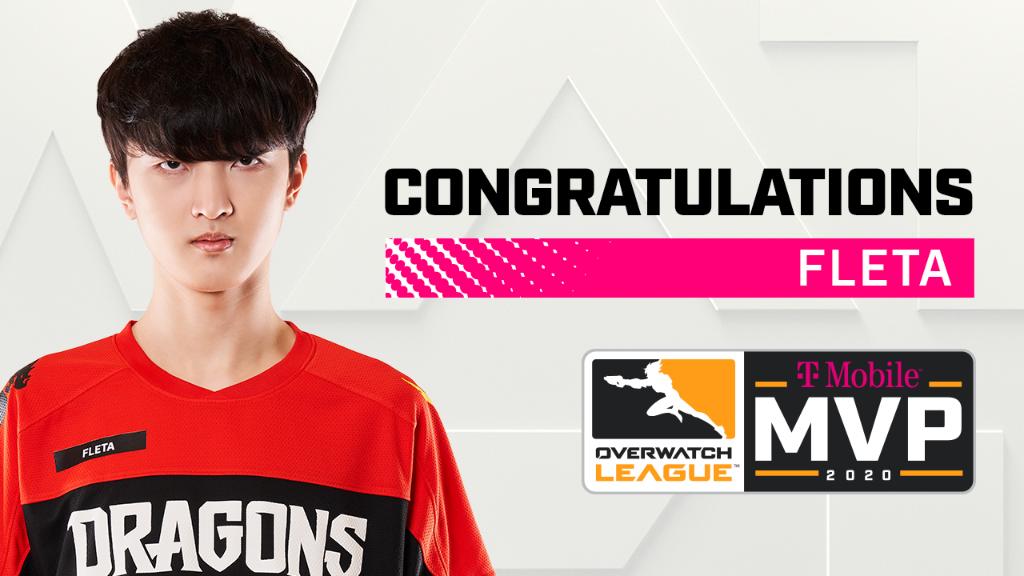 Fleta's story is one of a prison break. Trapped inside the mediocre Flash Lux roster in the APEX seasons, incarcerated on a mediocre Seoul Dynasty roster for two years, and now, he is finally sitting at the top of the world on the best team in the league, and as OWL's most valuable player. It's been a long time coming for Fleta, time and time and time again, he's proven himself to be ridiculously talented, but never had the opportunity to fully reach those heights. Fleta has been a franchise player for both of the teams he's been on, and he even has a statistic named after him to back that notion up. To finally see him acknowledged for his greatness as the 2020 MVP is nothing short of fantastical.

It's more than just his story from the previous years of Overwatch, he has been the best flex-DPS player this entire season. Tracer, Echo, Pharah, you name it, and Fleta is there to give your team the absolute domination they need to take the series into your team's hands. Shanghai would most certainly not be in the same position at the top without Fleta to hoist them there. An incredibly well-deserving MVP candidate, and the perfect name to etch into the echelon of Overwatch history.