The Overwatch League has announced the cancellation of all matches in the month of March in April. In a press release, the League reacted to the global fallout from COVID-19 and promised to play those matches out at a future when "it's safe and logistically feasible". The League is currently looking at options to move forward but hasn't specified any future plans. 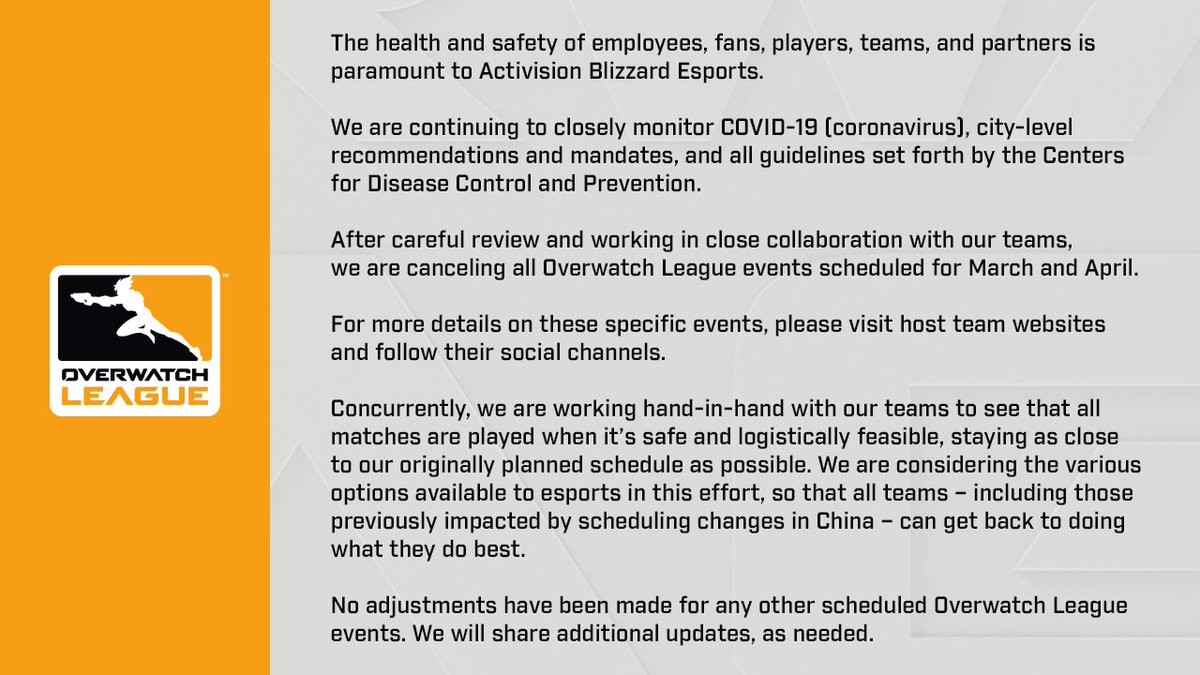 It's not known how the lack of matches will impact the wider Overwatch ecosystem. The online leagues Overwatch Contenders and Open Division theoretically wouldn't be under the same restrictions but are abiding by the hero pool bans resulting from the Overwatch League. The Overwatch League had added a feature called "hero pools" in which it gathers data on the play rate of heroes and adds every character with a play share above 10% to a pool to be drawn from. Two DPS, one Tank and one Support hero is chosen each weak to be banned from esports competition which also extends down to Overwatch Contenders and Open Division. As the Overwatch League can't currently produce these statistics, it's unknown how it will impact these leagues and whether these bans will be upheld for the time that the Overwatch League is on hiatus or if another solution is found.

Possible solutions for the missed Overwatch League matches could entail additional homestand events later in the year, stacking the homestands in the second part of the season with more matches or even playing competition online. The Overwatch League had moved to an exclusively homestand model in 2020, bringing Overwatch live games to dozens of cities in Asia, Europe and North America with localized teams hosting each respective event.

The World Health Organisation had announced on Wednesday that COVID-19 had officially been labelled a pandemic. According to WHO director-general Tedros Adhanom Ghebreyesus, the number of cases had increased 13-fold in the past two weeks.