It’s the most wonderful time of the year: Dota 2 time!

While this time of year is full of tinsel and mistletoe, it tends to be light on Dota 2. The game's Pro Circuit is in slumber until January and its players are either enjoying their holidays, or streaming them away. For those teams still in need of more frequent-flyer miles, however, ONE Esports has a solution. Together with organizer PGL, the originally MMA focussed organization is hosting the ONE Esports Dota 2 Singapore World Pro Invitational over the next week.

It's quite a mouthful, but when you've got $500,000 on the line and some of the biggest names in the game attending, certain allowances can be made. The event will start tomorrow and run all the way through Sunday, when its grand champion will be crowned.

The top six organizations of the last International, minus champions OG, are attending, be it with different lineups. MDL Chengdu Major winners TNC Predator will be there as well. Really, the only thing missing are XP talents!

The event's group stages take place December 17 through 19. They will feature the following two groups of six teams:

ONE Esports 👑#ONEDota2
@oneesportsgg
Here are your groups for the ONE Esports Dota 2 Singapore World Pro Invitational starting on Dec 17!
Event Page 👉
#ONEDota2 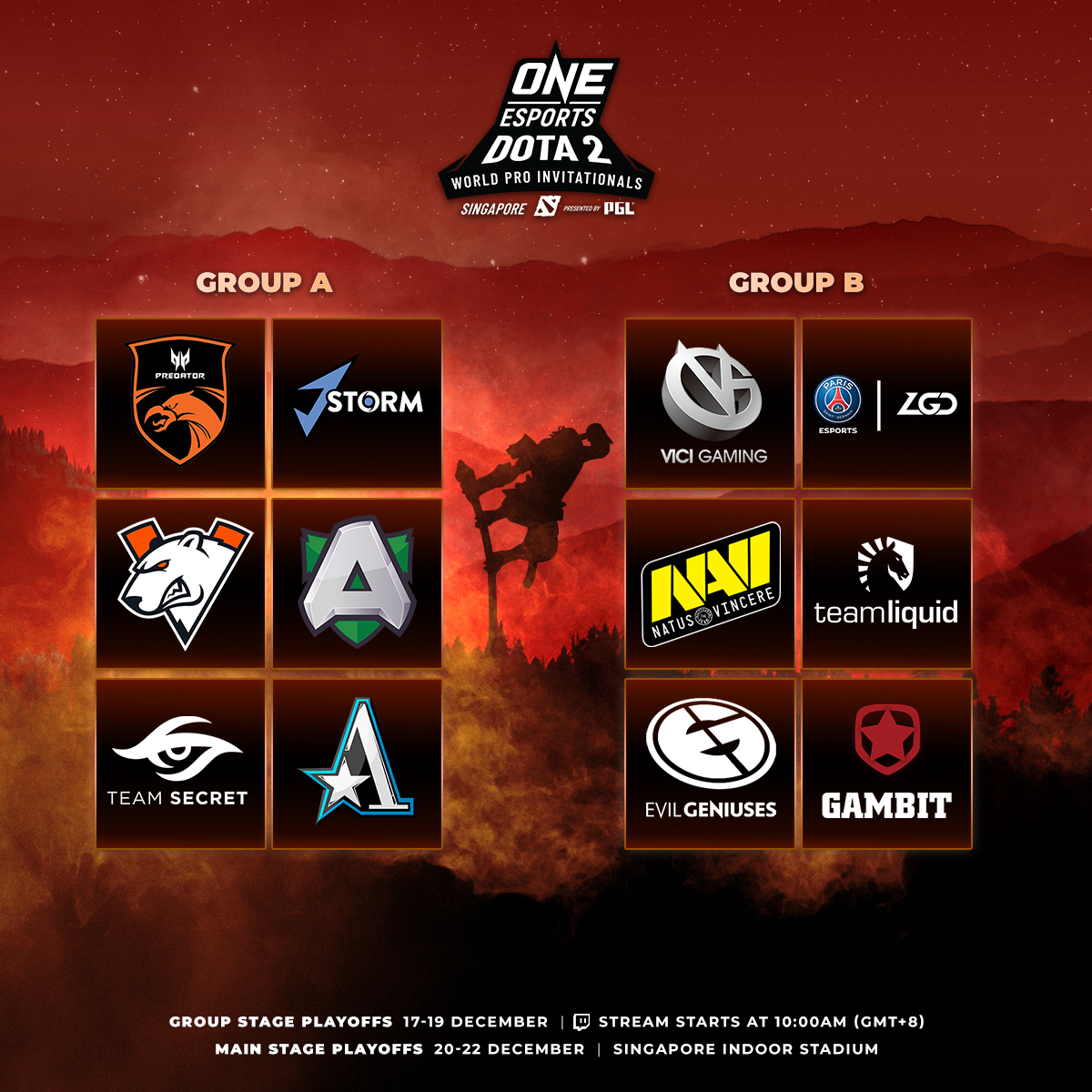 Then, from the 20th onwards the main event will be played out in a double-elimination bracket.

It's still early days on the Outlanders patch and, as recent qualifier results have shown, not all teams are comfortable in this new age of Dota 2 yet. So how do you predict how these teams are going to do?

Valiantly, of course, and completely without bias *ahem*. Join me, why don't you?

Jumping right in, I would rank this group as follows:

Team Secret is playing with MidOne instead of YapzOr, which would not be great if this were an end-of-season International. But it is not and he was a member of the team for three years. I don't think this change will influence its results much, at least in groups.

We haven't seen Virtus.pro at an event yet, but what we have seen of them suggests nothing much has changed in regards to this team. They do not attend events for participation trophies.

TNC Predator is a hard one. On the one hand, I want to give them credit for their Major win. On the other, their Leipzig Major qualification was a train wreck. I hope they'll show something different here, because Alliance will be nipping at their heels.

Of the last two teams, Aster is going to be one of China's Major representatives, J.Storm couldn't cinch an NA Minor spot. Sometimes it's that easy. They can make life difficult for the teams above them, but force any of them out.. I doubt it.

This group feels a little more even on paper, but I still think the top four fairly predictable:

Look, PSG.LGD messed up in the Leipzig Major qualifiers. You know, I know, they know. But it was a best-of-one series and since the team has carved its way through their WESG bracket. I think they're coming to this event with something to prove and that they'll be doing it from the top of this group.

That said, the next three teams have strong records on this patch. They've also already taken games off of each other in the new season. The order may change, but it seems unlikely that any of them will be missing the main event either.

Which leaves the CIS teams, which were just a little unlucky. In different groups I think they could have made it out, but here they’ll have to work pretty hard for it. I want nothing more than for Na'Vi to be back, but I'm not convinced they're this back just yet. I’d love for them or Gambit to prove me wrong though!

So, there you have it. The tournament starts tomorrow morning at 10:00 AM Singapore Time (which is UTC + 8 for those not familiar). It has three English language streams as well as a spiffy website with the full schedule.

As they say in ONE's home scene, let's get ready to rumble!

Image via ONE Esports