Uncovered Zelda game files reveal fans were originally going to play as Navi in an early Ocarina of Time build.

"Hey, listen". Even some 23 years after we first heard Navi screech those immortal words in the ears of a young Link, the fairy guide from The Legend of Zelda: Ocarina of Time remains one of the most divisive gaming characters of all time.

While some loved Navi's cheerful demeanour as a hovering ball of light, others hated her annoying timing of popping up at just the wrong time to interrupt the action with a usually unhelpful hint. How many times have we got stuck, only to have Navi constantly chime on in our ears as we try and avoid the urge to hurl a Nintendo 64 controller at her?

In the years since Ocarina of Time rightly earned its place as one of the best video games of all time, players might think they know all there is to know about canned sequels, lost levels, and things that were cut. However, following last year's data dump on forgotten Nintendo files that confirmed everything from Luigi nearly being in Super Mario 64 to a cancelled Pokemon MMO, there's even more to uncover.

The so-called Nintendo Gigaleak shed some light on the fabled Ura Zelda expansion that never arrived alongside Ocarina, however, a new leak has another major bombshell that you were originally supposed to play as Navi in one version of the beloved title.

How would you have played as Navi in Ocarina of Time? 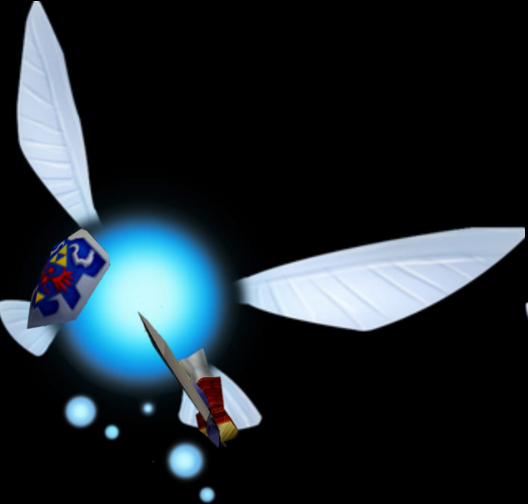 An Ocarina of Time demo was screened at Spaceworld in 1997, and while many thought it was lost, it's just been found inside an N64 development cartridge for F-Zero X and shared on Twitter by Forest of Illusion. Although most of the data has been overwritten, there are some huge takeaways of what could've been, This build comes from just before Ocarina was released to the public, meaning what's been cut here was done at the very last second.

Alongside a much bigger Kakariko Village and advanced archery test using Epona, there's the confirmation of the mythical Pegasus Boots that would help Link hover. Still, the biggest reveal is the ability to play as Navi. Link was reportedly going to transform into Navi using an item called the Soul Medallion. Activating it would allow Link to merge into his fairy companion and fly through the air as Navi. Better yet, he'd still be able to use all his regular equipment with a bird's-eye view of his enemies.

Aside from the Soul Medallion, there was a Mario Kart-inspired blue shell and the ability to cast spells similar to the Magic Rods from A Link to the Past. It's weird to see Navi dressed with Link's Hylian Shield and wielding a sword, but to be honest, we're kind of here for it. Considering some have dubbed Navi a "tactless Tinkerbell", anything to improve her would've been a welcome addition.

What happened to Navi after Ocarina of Time?

Allowing players to swap Link for Navi, does that also mean we could've saved that little ball of joy? It's no secret that Navi's post-Ocarina fate is a little murky. Although several of the game's beloved characters appear in other entries or are at least referenced, Navi is (metaphorically) cast out in the abyss and is never heard from again. The optimistic among us think Navi simply went back to Kokiri Village after Ocarina. Although fairy guides are usually assigned to one childlike Kokiri for their entire lives, the fact Link wasn't a true Kokiri means he left for pastures new and could mean Navi was given a new kid to mentor.

Darker theories suggest Navi looked into the Mirror of Twilight and was transformed into the spider Armogohma boss in Twilight Princess - later being dealt the fate of being slain by Link. Nameley most have settled on the idea that Ocarina was supposed to be part of a trilogy, with the third game never happening. This would fit with the idea that Navi was mentioned in Majora's Mask when Link started his story on a quest to be reunited with her. Ultimately, these are all ifs and buts for things that never came to pass.

It's clear Ocarina originally had a different path for Navi, with another reveal from the latest leak referring to the Great Deku Tree as a sort of fairy prison that Link had to free Navi from. Unless someone from Nintendo comments on all of the above, we're left wondering why her storyline was so dramatically altered. As we find ourselves still in the grip of a global pandemic, now couldn't be a better time to go back to play the lengthy Ocarina of Time for the 12,000th time. Unfortunately, players will have to imagine what it would've been like floating across Hyrule Field as Navi.