The Big House has had to shut down its annual Super Smash Bros. Melee tournament due to Nintendo copyright issues and use of Project Slippi.

The might of Nintendo has come down hard on the competitive Smash Bros. community and swung an axe at the world's longest-running Super Smash Bros. tournament. The Big House's annual Super Smash Bros. Melee event had been played without a hitch since 2011, but adding to an already sucky 2020, this will be the first year we won't be able to join in for all furious fun.

Nintendo has issued a cease and desist to The Big House, which has unfortunately been carried though and stopped this year's tournament in its tracks. With 2020's gaming scene being decimated by the ongoing coronavirus pandemic, everyone had had to adapt and largely move its competitions online. The Smash Bros. problem comes from The Big House using the Slippi rollback netcode to do so, which Nintendo America has said is a breach of copyright. 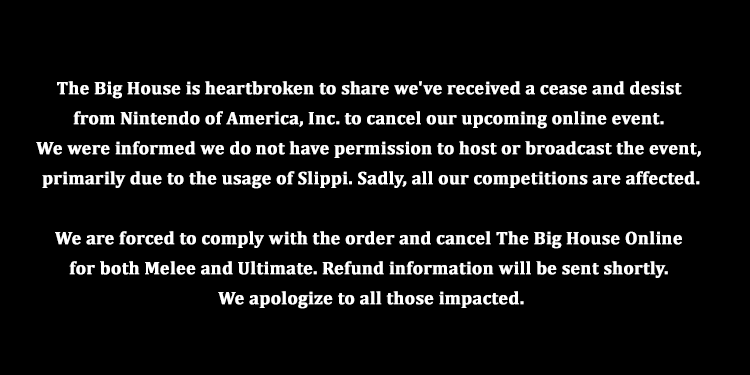 Issues arise from the fact Nintendo has never remade Super Smash Bros. Melee. Although plenty of the company's legacy titles have been given an update for modern systems, Melee has been confined to that big purple box. Considering Melee has been out of print since 2008, it can be a bit of a struggle to find a copy or a GameCube. By using largely obsolete software and hardware, it makes sense that The Big House would move with the times and take things online. Posting on Twitter, The Big House said it is "heartbroken" by Nintendo's decision.

The Big House continued, "We were informed we do not have permission to host or broadcast the event, primarily due to the usage of Slippi. Sadly, all our competitions are affected". Although there was plenty of support for The Big House, not everyone was as kind. One critic wrote, "Nintendo has the rights to shut it down. I see no reason and try to fire back at them. It's their product. And besides most of the players don't even legally own the game. Most players download roms to play it".

Another added, "You guys should've seen this coming. It kinda shocks me that you didn't. Think about it...you need a Melee ROM to use Slippi. Slippi, itself, is unauthorized software running online". 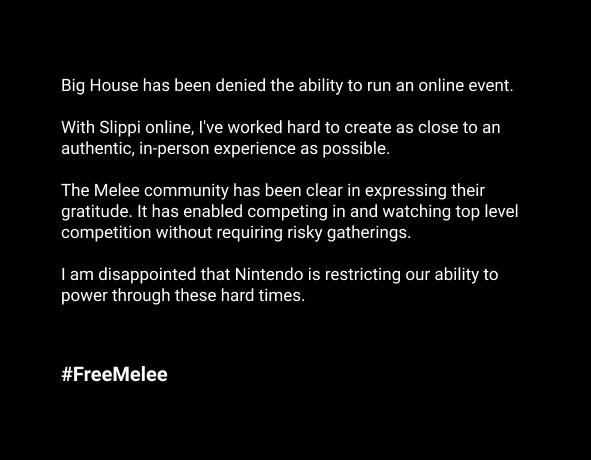 Slippi creator Jas shared their own two-cents alongside a "Free Melee" hashtag. There were numerous others who jumped on the Free Melee bandwagon to throw their support behind The Big House.

According to Polygon, Nintendo has released its own statement on the whole drama: "Nintendo appreciates the love and dedication the fighting game community has for the Super Smash Bros. series. We have partnered with numerous Super Smash Bros. tournaments in the past and have hosted our own online and offline tournaments for the game, and we plan to continue that support in the future.

"Unfortunately, the upcoming Big House tournament announced plans to host an online tournament for Super Smash Bros. Melee that requires use of illegally copied versions of the game in conjunction with a mod called “Slippi” during their online event. Nintendo therefore contacted the tournament organizers to ask them to stop. They refused, leaving Nintendo no choice but to step in to protect its intellectual property and brands. Nintendo cannot condone or allow piracy of its intellectual property".

Here's hoping The Big House can return to form in 2021 and take up its usual residence with an in-person event. For the time being, Nintendo is refocussing its efforts of Super Smash Bros. Ultimate, so don't expect to see a next-gen remastering of Melee anytime soon.