Matthew 'Nadeshot' Haag is the latest big Call of Duty player to call out Treyarch for an overpowered skill-based matchmaking system in Black Ops Cold War.

Matthew "Nadeshot" Haag has called on Treyarch to dial back skill-based matchmaking in Call of Duty. Although there's been plenty of praise for Call of Duty: Black Ops Cold War being a return to form for the beloved developer's next entry in its long-running Black Ops sub-franchise, that doesn't mean it's perfect. Once again, the subject of SBMM has reared its head and caused quite the controversy.

Having the general playerbase complaining about something like SBMM is one thing - and likely not to cause Treyarch too much hassle - but having someone as big as Nadeshot wading in is an altogether bigger problem. The former pro-CoD player is about as big as they come and is now known as the founder of 100 Thieves. He's previously voiced his disdain for SBMM, which is a hot topic in other games like Fortnite.

In theory, SBMM should work as it pairs you with players of a similar level in lobbies. However, the likes of Nadeshot argue it's putting you in a no-win situation where there's no chance to progress because you're constantly placed alongside players of the same skill level.

What has Nadeshot said to Treyarch?

100T Nadeshot
@Nadeshot
Call of Duty has created a hardcore True Skill system on the back end without any upside for players. I don't mind playing against people that are similar to me in skill, but at least tell me where I stand in comparison to others globally. Give me a rank that reflects my skill.
173
7364

While Nadeshot said he doesn't mind some elements of SBMM, he'd prefer a generalised ranking system where he can see where he ranks in the world. Taking to Twitter, Haag said, "I know you’re probably tired of hearing about Skill Based Matchmaking], but I truly believe it is imperative that Treyarch dials back the difficulty of lobbies". Expanding on what his problem is, Nadeshot reiterated, "We’re gonna drive so many big creators away, these games have been no joke. I’m dead after playing for 9 hours".

Nadeshot's feelings have been echoed across the board as others have called out SBMM affecting higher levels. Yes, it's great for inexperienced players as they can ease themselves into the game. When it comes to those at the top, it's a brutal bloodbath that can take it out of you. With this in mind, it's easy to see why Nadeshot and other big content creators might be put off playing.

Is there an alternative to SBMM?

Censor
@Censor
SBMM in Black Ops Cold War is so strong, that not a single pro player on my friends list has a 2.0 KD 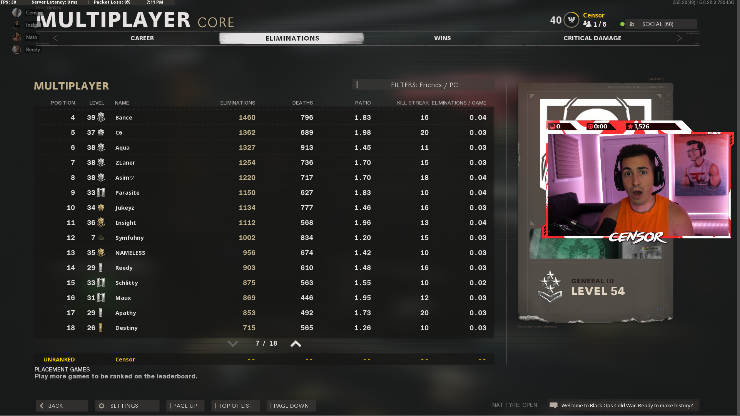 Nadeshot has previously championed ranked play and has once again appealed to Treyarch to introduce this system. With ranked, you'd be able to see where you stood in the world - which is data currently hidden by Treyarch. There are continued calls for SBMM to be dialled back or removed completely. The problem is that newcomers could find themselves matched against someone like Nadeshot, which would be akin to leading a lamb to the slaughter.

Elsewhere, Doug "Censor" Martin pointed out how his in-game leaderboard is populated by other pro players who can't get their kill/death ratio over 2.0. It's something that is unheard of in the competitive scene, suggesting something is off with Cold War's SBMM. Previously, Treyarch Director of Technology Martin Donlon said it isn't as simple as turning off SBBM, further backing up claims it's simply dialled up too high.

Treyarch hasn't responded to Nadeshot's critiques, but as more and more professionals jump off the SBMM bandwagon, it will be interesting to see if the developer finally makes the changes most people are asking for.