A standout off-tank that forges his own path, what’s not to love about Cr0ng?

Overwatch League’s 2020 offseason was packed to the brim with a litany of amazing rookie stars. This graduating class could easily go down in history as one that has even us the highest density of star rookie players that we might ever see in Overwatch League history and within the upper-class prospects sits flex tank Nam "Cr0ng" Ki-cheol, star flex tank for the Guangzhou Charge. From amateur ace to finding his own light in the Overwatch League, Cr0ng has quietly made a name for himself as one of the most talented rookie players this season.

Before entering the Overwatch League, Cr0ng honed his skills in the Pacific region and in South Korea alongside teams like ROX Orcas, DeToNator.KOREA, and finally finding most of his success with O2 Blast. It was in 2019 where Cr0ng truly took his play to the next level. To set the stage, Overwatch was in a metagame crisis. The tank centric GOATS composition, that took three of the game’s most controlling tanks and supports and paired them together in a concert of healing, armour, and shields.

While Cr0ng played well within that same framework primarily playing D.Va, he quickly rose through the ranks with Hanzo, a creative and unorthodox pick that O2 Blast popularized. His Hanzo created massive amounts of pressure against many teams who were leaning more towards Sombra GOATS compositions, style of play that was more passive in nature. This allowed the team to quickly race the enemy team towards key objectives and more often than not, the enemy would buckle, and opt for the mirror or return towards a standard GOATS composition setup. This style earned O2 Blast a strong second-place showing during Overwatch Contenders Season 1: Korea only being bested by Element Mystic.

Cr0ng and O2 Blast continued to be staples within the South Korean region throughout 2019 with strong performances at the Pacific Showdown and during Season 2 of Overwatch Contenders 2019. However, on November 14th, Cr0ng took his talents to China to bolster the Guangzhou Charge as they prepared for the 2020 Overwatch League season.

“It doesn't surprise me that Cr0ng is doing well this season with the Charge,” Overwatch Contenders commentator, coach, and analyst Hamzah "lafon" Mostafa said. “I think one of the things that has historically most defined him has been his consistency. Even in Contenders, which can be more volatile from team to team, I think that was always the best feature that he had.”

Fellow Overwatch Contenders commentator and analyst, Christian "Heurix" Thomasser, echoed this sentiment. “Cr0ng caught my eye very early on into my first season casting Contenders Korea. Through O2 Blast's meteoric rise through the regular season and into playoffs, after a last-place finish in the previous season, Cr0ng was a consistent staple.”

Heurix explained that another boon Cr0ng granted O2 Blast during their Overwatch Contenders run was his playmaking ability, which was only matched by the likes of Element Mystic’s Choi "Hanbin" Han-been and RunAway’s Yu "QoQ" Sung-jun. “However, neither of them could match Cr0ng's impact and versatility prior to role lock with the Hanzo and Sombra flex,” he continued.

This completely shut down the meta compositions at the time.

Cr0ng’s entrance into the Overwatch League was met with many analysts and pundits in the community placing lofty expectations on the young flex tank. He was easily one of the biggest reasons while the Guangzhou Charge shot up the preseason power rankings. However, it seems like he has met and even surpassed those early box office metrics.

“It was interesting to see the community reception of Cr0ng's graduation to the Overwatch League because I think I always felt a bit differently than some,” Heurix explained. “You go back and look at those comments and you'll find folks talking about his Roadhog and Zarya, a little celebration over his Hanzo, despite being unlikely to have him show that again now due to role lock, and then a few questions about whether his D.Va was good enough. To be fair, I think Cr0ng certainly fits the mould as a playmaking off-tank."

“Cr0ng was in a pretty strange spot going into 2020 as a rookie,” Overwatch League commentator and analyst Wolf "Wolf" Schröder expanded on the context around Cr0ng’s history in Overwatch Contenders. “He had strong performances in 2018 in Contenders Korea's last offline season, but his team, unfortunately, fell short and they finished 1-4. This I think really hurt his chances of joining OWL in 2019, even though he was a very strong individual at the time. 2019 was O2's year, and a major reason they took upset wins throughout 2019 was Cr0ng's flex tank play.”

Cr0ng’s entrance into the Overwatch League was met with many analysts and pundits in the community placing lofty expectations on the young flex tank. He was easily one of the biggest reasons while the Guangzhou Charge shot up the preseason power rankings. However, it seems like he has met and even surpassed those early box office metrics.

“It was interesting to see the community reception of Cr0ng's graduation to the Overwatch League because I think I always felt a bit differently than some,” Heurix explained. “You go back and look at those comments and you'll find folks talking about his Roadhog and Zarya, a little celebration over his Hanzo, despite being unlikely to have him show that again now due to role lock, and then a few questions about whether his D.Va was good enough. To be fair, I think Cr0ng certainly fits the mould as a playmaking off-tank."

“However, looking back on those games and my notes, Cr0ng absolutely was one of the top D.Va's in the region at the time,” he continued. “[He] particularly excelled at isolating and locking down key targets as well as establishing flank and high-ground control on DVa. He also sported some of the highest Self-Destruct kill rates that season, which was jam-packed with high-level D.Va play.”

Wolf explained that because Overwatch Contenders Korea didn’t have much of a western audience in 2019, he thought fan expectations were fairly low. “Most people remembered him from APEX, or not at all,” he said. “My expectations for Cr0ng were pretty high, and he's exceeded them. He is having a phenomenal season, and is really coming into his own in the latter half."

Together with the Guangzhou Charge, Cr0ng has continued to improve on his impressive Overwatch Contenders performance. Fielding any and all playstyles, Cr0ng has shown a level of versatility that is only found within some of the veteran superstars in the league. Not only can he position passively and play for his team, but more often than not, he is an explosive playmaking force. With this in mind alongside his flexibility during the GOATS metagame has earned him the nickname “Mold Breaker.” Someone who won’t conform to anything the game put in his way.

Cr0ng is the type of player to take a situation, no matter how the odds weigh in or out of his favour and make it his own. He forges his own path, whether you think he can or not. If GOATS told him to play D.Va, he found a way to abuse teams with Hanzo. If a fight looks rough on stage with the Guangzhou Charge, his punches a hole in the enemy’s defence. If his teammate, Ou "Eileen" Yiliang, is the spearhead of the Guangzhou Charge, Cr0ng is most certainly the shield bash that allows him to get within striking distance. This concept was on full display as the pair lead Guangzhou in their upset over the Shanghai Dragons in the grand finals of the Summer Showdown.

GuangzhouCharge
@GZCharge
Todayï¼Œwe slew the dragons!
A new name has been written on the throne, and it is GuangzhouCharge!
we are the Summer Showdown Asian region champion!
RT/Comment
10 Winners
Each one gets 30 OWL PC Tokens
#ChargeForward 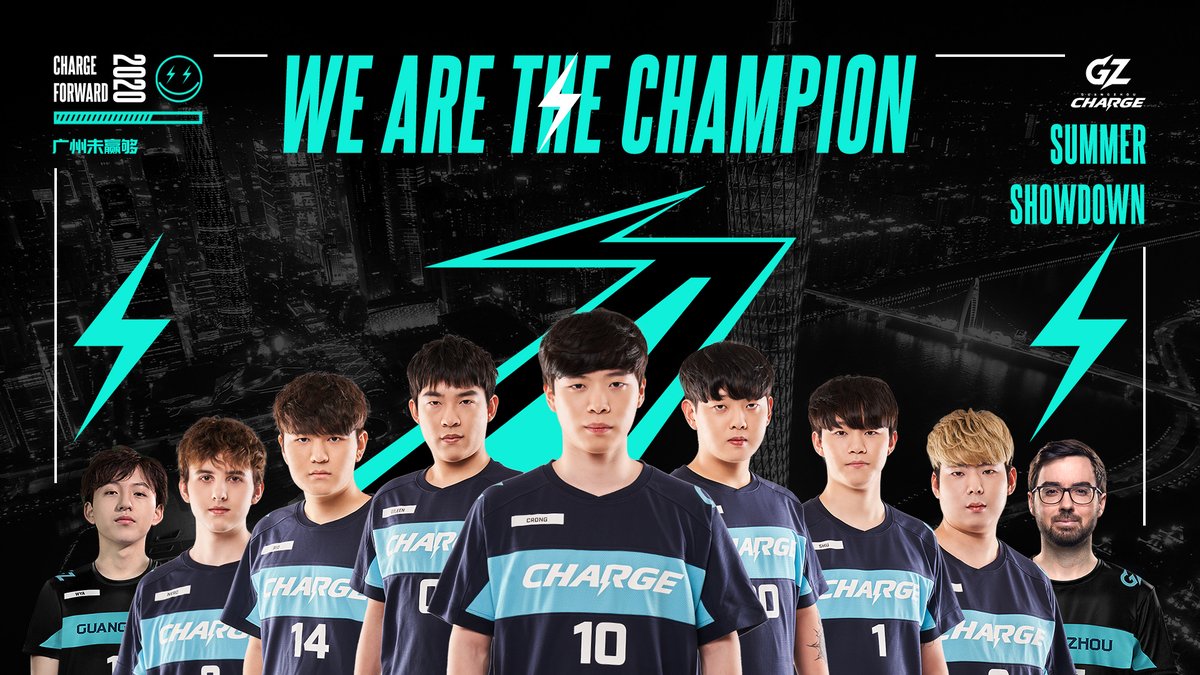 “Throughout this season with Guangzhou Charge, it's clear that while Cr0ng is still very much a devastating playmaker in his role,” Heurix explained. “It seems like that team environment and the coaching staff has done well to round out his skillset and continue that progression we initially saw alongside Kaiser in Season One 2019 to facilitate big plays.”

Reflecting that same feeling, Lafon furthered that praise.“He's definitely played exactly to my expectations of being a very high level, reliable off-tank, that can carry if you need him to, or blend into the background to peel if you need that as well. He definitely adds a level of playstyle versatility that can make or break [the] position.”

Quietly, Cr0ng has built a massive cult-following who points towards him as the leading candidate in the Rookie of the Year discussion and when you look at his resume, it’s not as crazy as it might sound. Not only has been a starter for the Charge throughout the ups and downs the 2020 season has thrown at him, but he has also been a star member of the team every step of the way.

Lafon had a more measured response, one that reeled in the expected glowing review. He tapped Philadelphia Fusion’s rookie flex support Kim "Alarm" Kyung-bo and the Paris Eternal’s star DPS Kim "SP9RK1E" Yeong-han as ahead of Cr0ng on his own personal ballot due to the pair’s individual impact. “[...] While Cr0ng has been insane, there are some questions as to how much of that is the eye test versus how numerically he's performed.”

“This year saw a lot of talented rookies enter the League,” Heurix said. “Especially so many other great off-tank rookies with high expectations as well: Hanbin, QoQ, and Hawk, just to name a few. Cr0ng is always going to be a player that stands out to me, and while it may be hard for me to lock in just one single player for Rookie of the Year this season, he absolutely is leading the charge in that race for me.”

“Cr0ng is definitely on the cards for the Rookie of the Year if he can continue to play consistently well across the flex tank role,” Wolf said. “His Sigma, in particular, has recently been the best in Asia. I don't think he'll make everyone's list because his early-season performance wasn't as standout, but if he can finish strong, he might get my vote.”