Worlds is here, and so are the storylines.

With the League of Legends World Championship groups drawn — as well as the play-in stage groups being decided —  teams are set and eagerly awaiting to begin the first and only international tournament of the year in just over a week.

Every group has its fair share of possible storylines as it’s par for the course for every year’s World Championship. Ranging from the play-in stage, through to each group, there is always a chance for old storylines and new storylines to arise. 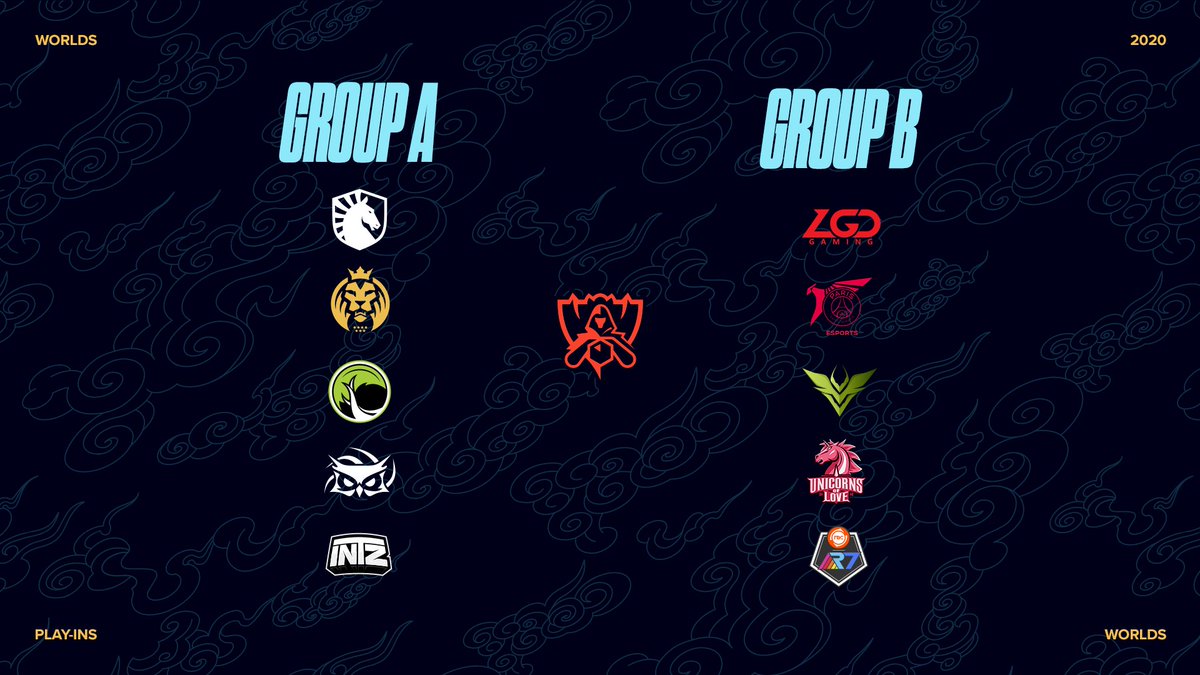 Apart from the age-old battle between Europe and North America — having LEC’s MAD Lions and LCS’ Team Liquid play against each other — there aren’t many past storylines to go off of between Group A’s teams. Only three teams in the group have gone to either international play, World Championship play, or both. Those teams are Team Liquid, CBLoL’s INTZ, and Turkish Championship League’s (TCL) Papara SuperMassive. Oceanic Pro League’s (OPL) Legacy Esports has been to two Rift Rivals tournaments, while MAD Lions will have their first go at this tournament as an organisation as they used to be Splyce — Marek “Humanoid” Brázda is the only remaining player from that roster having gone to the World Championship once last year.

Out of all the teams in this group, Team Liquid is the clear outlier as they were North America’s No.1 seed going into the World Championship in both 2018 and 2019, just to then fail to get past the group stage. They also went to those years Mid-Season Invitationals (MSI), where they were able to claim second place in 2019’s MSI after being swept by LEC’s G2 Esports. This is their chance to correct those poor past performances. Papara SuperMassive and INTZ are looking to show off that both they and their regions have improved as well. While MAD Lions and Legacy Esports get their first taste of World Championship matches.

Much like Group A, Group B only have a handful of teams who’ve gone to the World Championship in the past, those being LPL’s LGD Gaming who last went in 2015 — severely underperforming as one of the tournament favourites — as well as the League of Legends Continental League’s (LCL or CIS) Unicorns Of Love who played in last year’s Worlds. This is the first time teams like Pacific Championship Series’ (PCS) PSG Talon, Latin America League’s (LLA) Rainybow7, and League of Legends Japan League’s (LJL) V3 Esports have gone to the World Championship, with Rainbow7 having some prior international experience having played at MSI and Rift Rivals of 2018. However, the roster now is entirely different from the roster back then.

Not much of a rivalry to be had in this group as all of the teams haven’t played against each other in the past. This will be a fresh new start for possible new rivalries. 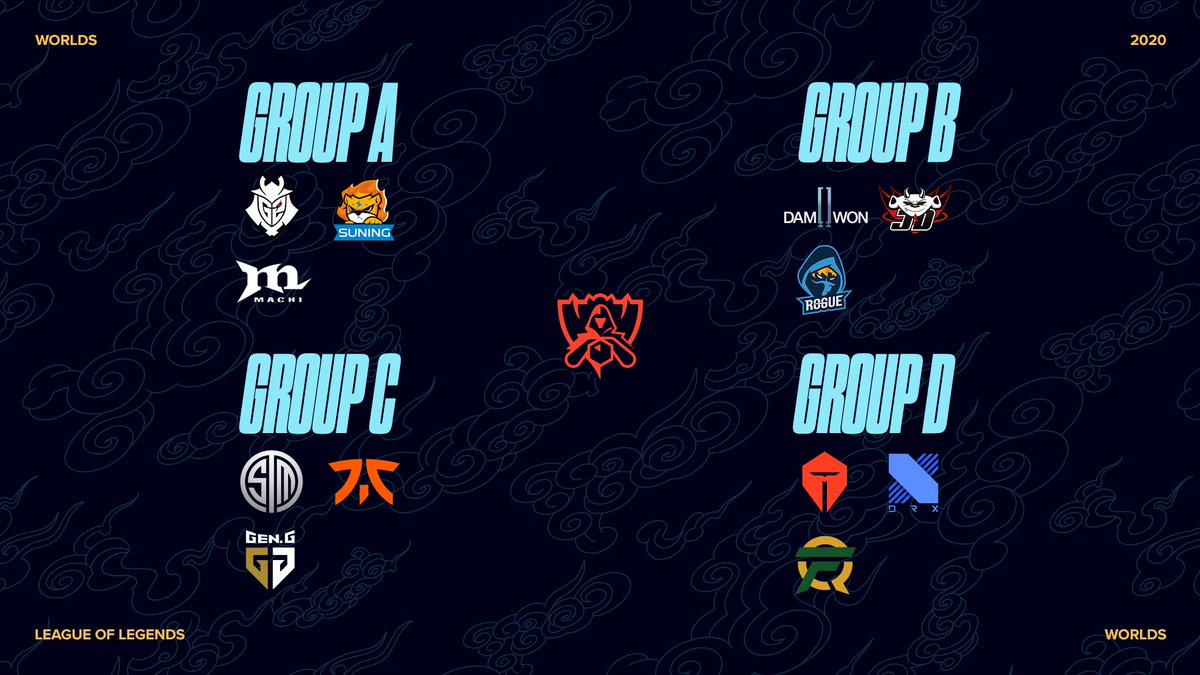 This group is the consensus “Group of Life”. Out of these three teams, there isn’t much history for the LPL’s Suning, and the PCS’ Machi Esports as both of the teams have never been to a World Championship before.

When it comes to LEC’s G2 Esports, they have plenty of international and World Championship experience. Having finished in first place, sweeping Team Liquid in the MSI finals of 2019, later having been runners-up to FunPlus Fenix of that same year’s World Championship Final, this is a team that was built to win Worlds and win Worlds only. Ever since their roster change of bringing in Rasmus “Caps” Borregaard as their mid-laner and moving Luka “Perkz” Perković to the AD carry role, this team has been a force to be reckoned with.

For the LEC’s Rogue, this is the first time they appear at the Worlds stage being one of the new teams to join the LEC after the transition into franchising last year. They were the first team out of all of the leagues to qualify for the World Championship having guaranteed themselves a spot with their Spring and regular Summer split performances.

This group also has a staple of the League of Legends Champions Korea (LCK) in DAMWON Gaming — this is their second trip to Worlds as they qualified last year. To round out the group, the third team to be part of this group is the LPL’s JD Gaming. JD Gaming’s only international experience is Rift Rivals of 2019. However, they are still a strong team coming into the tournament, as they beat Top Esports — one of the tournament favourites — earlier in the LPL Spring Finals.

Probably the most contested group, having two of the oldest organisations in League of Legends history in Team SoloMid and Fnatic as the first two seeds. This is the group with the most history and potential rivalry out of the bunch. Add the fact that Gen.G is looking to right their Worlds 2018’s wrongs with a brand new roster who just cleaned house in the Worlds Championship qualifiers. This is also the group of the AD carries, having Martin “Rekkles” Larsson, Yiliang “Doublelift” Peng, and Park “Ruler” Jae-hyuk.

The clear storyline here is Fnatic and Team SoloMid as the two more storied teams in LoL history. The teams have battled against each other countless times, with most recently Fnatic defeating Team SoloMid in last year’s Rift Rivals. This is the first time in their long existence in pro League of Legends that they are in the same group, as well as the first time that they get to play each other at Worlds.

For the final group, the “Group of Death” according to many analysts, pundits, and fans. This team has two of the strongest teams in all of the tournament with the LPL’s Top Esports being the possible favourites, and a strong LCK No. 2 seed in DRX. The clear outlier is FlyQuest, as they came in as the LCS’ No.2 seed, making it their first World Championship appearance in their organisation’s history since joining the LCS in 2017.

All of the teams in this group have never made it the World Championship, and this will be their first time treading new territory. Top Esports and FlyQuest have never performed at the international stage, while DRX — back when they were Kingzone Dragonx — had gone to MSI back in 2018. That Kingzone Dragonx team and this DRX team are vastly different rosters.

The LoL Worlds games begin on September 25, where all of these teams will get to fight it out for the chance to call themselves the 2020 Worlds Champions.