After months dominating the Scouting Ground Circuit, Kenvi and Tenacity are finally moving up to 100 Thieves Academy.

Following Meteos’ departure from 100 Thieves, 100X jungler Kenvi is taking his place while top laner Tenacity is also moving up. Those who watch the amateur scene will already be very familiar with these names. In fact, even people who don’t watch the Scouting Ground Circuit know them; the hype around them is just that big. The excitement is warranted though, as these two players are the greatest prospects to come out of the amateur scene for a long time.

At the end of June, 100 Thieves also promoted Poome to become their starting LCS support, just a month after he joined 100A and less than six months after joining 100X. With all this talent coming out of the amateur scene and moving up, we’ll have to wait and see how they do in the long run. If you’re interested in watching or competing in the Scouting Ground Circuit, then check out our Guide to the SGC here.

King of the Jungle

With an over 90 percent win rate this year in the SGC, a lot of 100X’s success comes from the jungle. Seventeen-year-old Shane "Kenvi" Espinoza is from the Philippines but moved to Canada two years ago. He began playing League of Legends in Season 4, only reaching Challenger for the first time in Season 8.

He began playing in the amateur scene in September 2019 on the team Lucky Esports, alongside C9 Academy ADC ‘Tomo’ and ‘always plan ahea,’ now the star mid laner for the amateur team Supernova. Competing in the UPL 2019 Fall Season, they went 5-0 in their group before falling in the finals to come second. Soon afterwards, Kenvi joined the team Full Spectrum to play in the third Tyler1 Championship Series but was knocked out early on.

Kenvi still managed to show off his talent though and left Full Spectrum to join the newly formed 100 Thieves Next team alongside Tenacity, Poome, Copy and Auto. On his previous rosters, Kenvi received little coaching and continued to play as he did in solo queue. Only once he joined 100X was he taught how to use comms properly and play as a functional team. Since then, this young player has ploughed through every opponent in his way to secure the top spot in the SGC.

Kenvi is a carry jungler through and through, often leading his team to victory using champions like Graves, Kindred, Lee Sin, Olaf and Nidalee. In this snowball heavy meta, a proactive and playmaking jungler like Kenvi is essential to securing consistent wins. He’s even comparable to C9 Blaber in many ways, with both a similar champion pool and the same aggressive style of play. 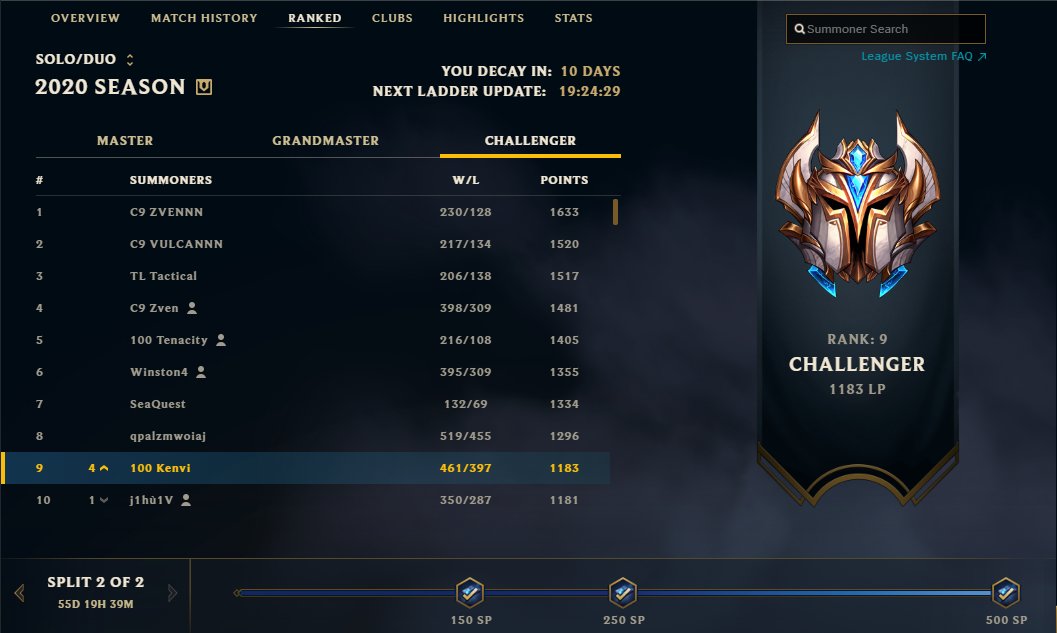 Interestingly, Blaber also began his career from the Scouting Grounds, before seeing a meteoric rise in 2018 to receive the Rookie of the Split Award. While Kenvi likely won’t get a shot in the LCS at the very least until next year, it wouldn’t be surprising to see him showing a similar level of dominance on the 100 Thieves Academy team. 100A currently sits at 6-6 in a three-way tie for fifth place, so he’ll need to pull a few wins out of the bag to secure one of the six playoff spots. Don’t miss his first 100 Thieves Academy match on July 23rd, up against the third-place CLG Academy team.

100T Tenacity
@tenacityna
Thank you @100Thieves and @PapaSmithy for the jersey! Exicted to represent the org! #heist 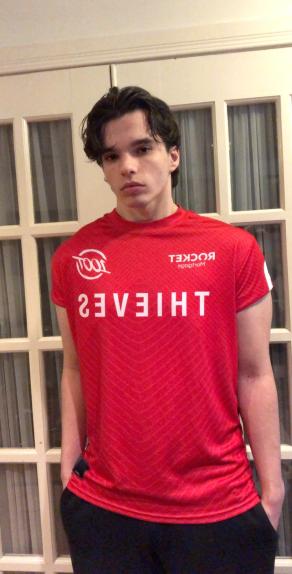 Born and raised in Canada, Milan "Tenacity" Oleksij is a talent of similar calibre to Kenvi. Also just seventeen years old, Tenacity only began playing League late in Season 5. For four years he played casually but decided to take ranked a bit more seriously in Season 9. Switching roles from ADC to top lane, Tenacity climbed from D1 to Challenger in just a week. He then competed in a few amateur tournaments in 2019 before being quickly signed to the 100X program. 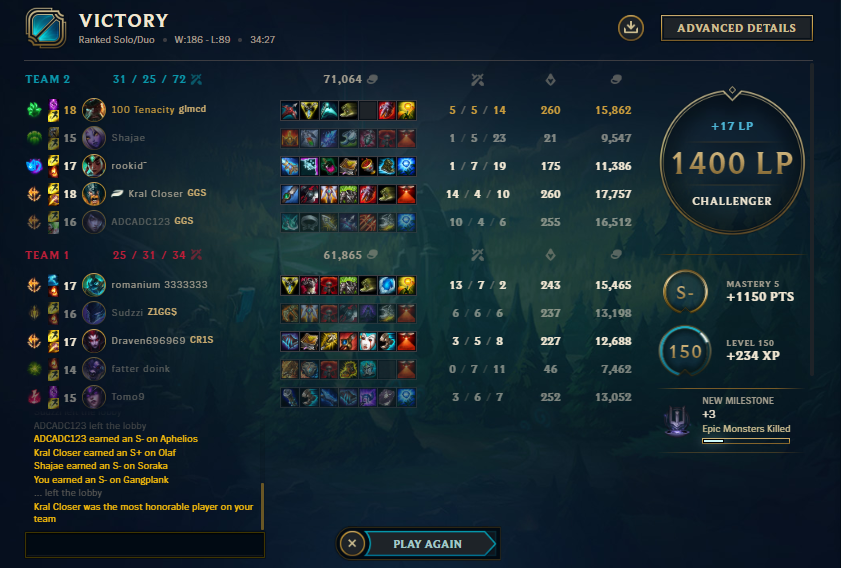 Like Kenvi, Tenacity isn’t content sitting back and playing passive on a tank. He’s known particularly for his Irelia, which sits at a 69% win rate in solo queue and a 100% win rate over five games in tournament play. He also favours champions like Aatrox, Renekton, Gangplank, Jayce, and Fiora, which he has found great success with both in solo queue and the amateur scene. He’s even displayed a wide champion pool that includes mages like Ryze, Cassiopeia and Karma and ADCs like Lucian.

With mechanical skill like this, Tenacity has seemingly unlimited growth potential. If he’s able to learn well from both his seniors Ssumday and FakeGod, Tenacity could be one of the core parts of 100 Thieves’ LCS team within a few splits. Currently, though, PapaSmithy has said that he will need to split time with FakeGod on the Academy team, competing for his position.

As young NA talent, these are the kind of players that the LCS sorely needs. Rather than recycling old veterans or favouring imports from other regions, it’s great to see 100T taking the initiative and developing their own native talent. It looks like 100T is continuing this trend of scouting great talent, as Kenvi’s replacement on 100X is already looking like a potential talent. Pulled straight from solo queue, ‘NXI’ managed to carry 100X to a thrilling reverse sweep in the Challengers Uprising Semifinals.

Challengers Uprising
@Challengers_Up
BACK TO BACK TO BACK CARRY PERFORMANCES FROM @xindinh.
@100Thieves NEXT COMPLETE THE REVERSE SWEEP AGAINST @PolarAceEsports AND QUALIFY FOR THE CHALLENGERS UPRISING GRAND FINALS.
WHAT. A. SERIES.
#ChallengersUp
4
37
Advertisement

After NXI’s victorious debut, PapaSmithy had this to say on Reddit:

“Really fun series, big shoutout to NXI coming into two elimination Best of 5s back to back after ONE day of scrims straight out of solo queue and legit BEASTING it."

“Get him on an academy team FAST.”

At this point, it’s confusing to see that other franchised orgs aren’t scrambling to create their own amateur teams. With so much success coming from the 100X project though, 100 Thieves can look forward to great success across all three tiers of the NA scene in the future.