Fortnite may be losing favour with its own fans.

Fortnite Battle Royale is a powerhouse of the genre. Since it's release in 2017, it has 350 million registered users worldwide as of May 2020, and the game’s popularity never seems to waver. But dig beneath the surface and we find that is not quite the case.

There is little doubt of Fortnite’s success, and the idea of its popularity being a “fad” is long quashed, yet the honeymoon period has come and gone for Fortnite, and there are signs that it is facing a decline. In August 2018, Fortnite had 78.3 million active monthly users, and no new statistics can be found for more recent figures, as suspiciously none have been released. However, the in-game events such as the Marshmello and Travis Scott concerts pulled in 10.8m and 12.3m players (or viewers) respectively.

The stats we can find, show a worldwide flux in numbers of Fortnite searches online in the past year (compared to other leading Battle Royale titles), with peaks and troughs, usually happening around updates, starts of new seasons, or events.

Does this mean Fortnite is only able to retain its audience through these “special events” or by releasing fresh content?

Sometimes a game begins to fall flat when the novelty has worn off, and that just might be what is happening in Fortnite’s case. The meteoric rise was nice, but can that carry over into long-term playership? When a title is such a resounding success, it becomes a burden that the developers must carry on their shoulders – to maintain that level of quality over the game's career.

The overexposure Fortnite has had may have shined a light on parts of the game that Epic Games weren’t too happy about being given a platform.

Fortnite is enjoyed by children and adults alike, but it came to the attention of mainstream media very suddenly, giving parents a voice. Most of these debates about if Fortnite is “bad for kids” are overwhelmingly against the game and it’s “addictive” nature. This amount of bad press front and centre could lead some players to not bother with the game to begin with - or quit.

Let’s bring it back to the famous article that spurned a whole generation of parents on to ban their children from playing Fortnite – the Mirror’s article titled “Girl, 9, in rehab for Fortnite addiction after becoming so hooked she WET HERSELF to keep playing.”

There has always been an element of “games bad” amongst parents, arguing it causes their children to become addicted, violent, lazy, and any other number of insults, but the success of Fortnite worldwide has transformed this title into the ultimate buzzword for parents trying to pull their kids away from “mind-numbing video games”.

Epic Games Have Dropped the Ball

Epic Games have tried and tested many different things when it comes to Fortnite, from an ever-changing weapon pool, to new POI’s, complete overhauling of the map, and rotating game modes.

The weapons, in particular, have always been a talking point. Anytime a weapon is added, removed, buffed, or nerfed – the fans have something to say about it. Failure to regulate the loot pool is one of Epic’s biggest issues, adding ‘broken’ or ‘overpowered’ items such as Combat Shotguns and Grenade Launchers.

The biggest ball-drop was the implementation of adding no patch notes to updates, leaving players to figure out what had changed for themselves (or leave it up to dataminers).

The addition of Giant Robots called ‘B.R.U.T.E. mechs’ was hotly debated when it was introduced in Season 10, with players complaining they were ridiculously overpowered – a fair statement given they had 1000HP, insane movement abilities and rocket launchers. When they were nerfed and eventually removed, even pro players were glad to see the back of them.

Speaking of robots, the bot players added to Chapter 2 Season 1, as announced by Epic, were not met with gratitude from the player base, rather, annoyance. It seems the move was to bring in new players without them immediately becoming frustrated with a highly-skilled lobby, as most players have been consistent since the initial launch of Fortnite, and therefore are pretty challenging to face in your very first match. The fact Epic Games endeavoured to make their lobbies less ‘sweaty’, shows they knew something was amiss in terms of the skill differences of their massive pool of players.

Daniel Ahmad
@ZhugeEX
An overlooked feature of Fortnite Chapter 2 is bots.
New players face a high number of bots and as their skill increases they face fewer bots.
PUBG Mobile did this from day 1 to give players a chance to learn and stick to the game. Hence why it was so successful on mobile. 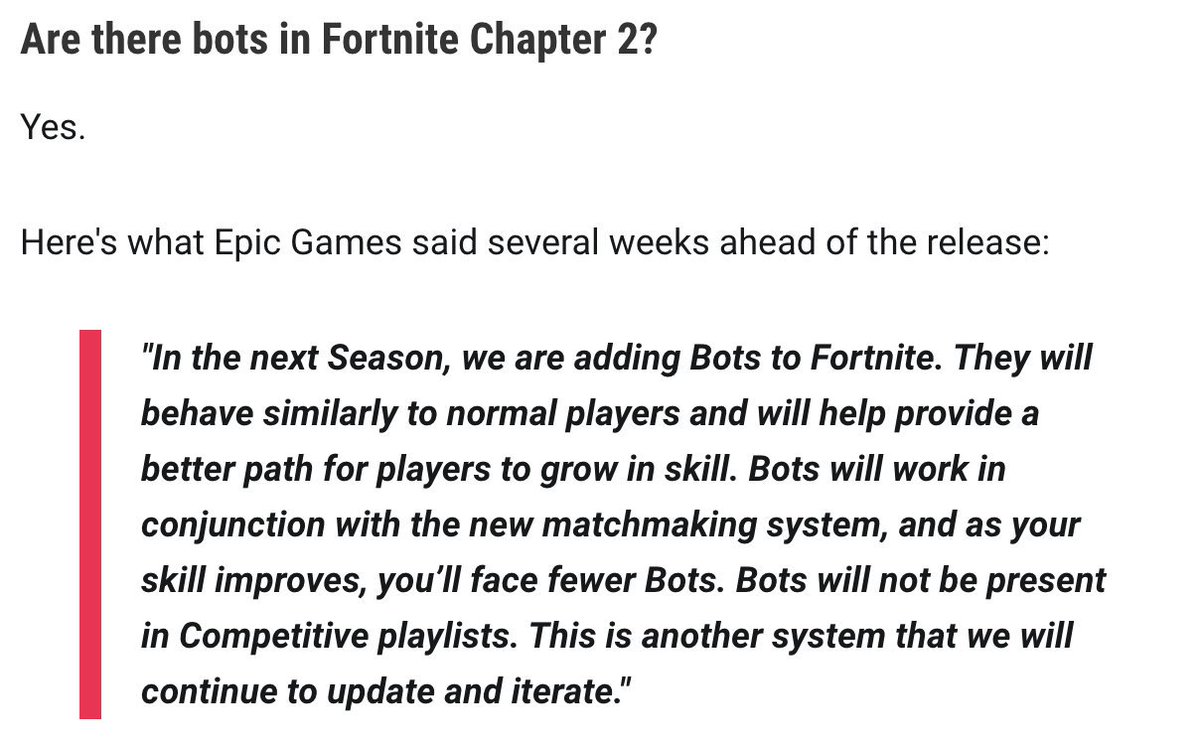 Mujib
@jibb233
My cousin won his first game in fortnite chapter 2 ... little does he know the game was full of bots
0
0

In a way, it probably did appeal to new players, but the current players were not pleased with the change. Just as PUBG players are disgruntled at the recent addition of bots to their games, so were they.

Is the Battle Royale Market Flooded?

Fortnite isn’t safe in its castle, other titles are vying for the crown. Apex Legends, which was released in 2019, and the newest contender Call of Duty: Warzone are both steadily gaining momentum in their efforts to topple the Epic Games regime.

Call of Duty is one of the biggest gaming series of all time, spread across all platforms, and consistently played online by millions. So, when Warzone dropped, their prayers for a Battle Royale in a familiar setting were answered, and the game amassed 30 million players in its first 10 days of life.

Apex Legends boasted 70 million players in Oct 2019, just 8 months after it’s launch, and continues to provide interesting and ever-changing landscapes for its players.

Is Fortnite’s decline in part due to these other titles? The evidence would seem to suggest yes.

Google Trends suggests that searches for Fortnite compared to Warzone were vastly different in May 2020 alone. Warzone is shiny and new, whereas Fortnite may appear old and tattered to some players.

Attention spans are fickle things. While some gamers may stick with one title for years (looking at you, Skyrim) others want to chop and change and need variety to do so.

While Fortnite needn’t worry too much about its longevity right now, Epic Games should be wary that Apex and Warzone are on the hunt, and they want that top spot.