A guide to unlocking Daredevil.

Matt Murdock — aka Daredevil — is one of Fortnite Chapter 2 - Season 4’s featured skins.

Unlocking Daredevil is different from most of the other Marvel-themed skins. No amount of XP or challenges will net you Daredevil. Daredevil is tied to his own personal Fortnite tournament titled the Daredevil Cup. Players must battle it out and come out victorious if they wish to dawn the Guardian Devil’s outfit.

In this guide, we will highlight exactly how to unlock the Daredevil skin and the rest of the Daredevil set. Additionally, we’ll discuss the possibility of future tournaments revolving around other unreleased heroes and villains like Venom and Black Panther.

Unlike most of the other Marvel heroes and villains, Daredevil can not be unlocked through Battle Pass tiers or completing challenges. Initially, the only way to acquire the Daredevil skin is by participating in the Daredevil Cup.

The Daredevil Cup is part of a new tournament series revolving around the Marvel Knockout limited-time mode (LTM). This game mode utilises a specific set of rules and settings involving the usage of the Chapter 2 - Season 4 Mythic abilities.

However, it does not stop there. Not only must players participate in the Daredevil Cup, but they must also place within a certain threshold in the standings to unlock the Legendary skin. The required placements are as follows:

Players in these regions that meet the requirements will be gifted the Daredevil skin completely free. The Daredevil Cup will begin on October 14.

The Daredevil Cup is part of a larger tournament series titled the Marvel Knockout Super Series. In the official blog post announcing the Daredevil Cup, Epic Games tacked on the following information:

From the sound of things, there may be up to three other Marvel-themed skins reserved as rewards for top placements in these upcoming cups. Prominent Fortnite dataminer and leaker, HYPEX, appears to have drawn the same conclusions. In a tweet, HYPEX predicts that the rumoured Venom and Black Panther skins will be tied to one of these three cups.

HYPEX 🎃
@HYPEX
This "Daredevil Cup" is a part of tournaments series called "SUPER SERIES", we will get 3 more tournaments next that will POSSIBLY feature the 3 other skins in the comic.. (Venom, Black Panther..)
Also the Daredevil skin will be in the shop later after the tournament.
197
3988

Readers without a competitive spirit should not fret. Placing in the Daredevil Cup is not the only way to unlock the skin. Daredevil will be made available in the Item Shop following the completion of the Daredevil Cup.

According to HYPEX, the wait will not be long. Daredevil is scheduled to hit the Item Shop on October 17. Until then, the skin will be exclusive to the Daredevil Cup champions.

How Much Will The Fortnite Daredevil Skin Cost?

Based on Fortnite's Item Shop history, Daredevil will probably be priced at 1,500 V-Bucks. The Silver Surfer, another featured Marvel skin, was released in the Item Shop for this same price. Epic Games tend to follow the same pattern and keep its prices standardised. It's doubtful that Daredevil will cost any more or less V-Bucks. This seems like a deal considering the rich history of the Marvel Cinematic Universe.

Daredevil fans that consider this skin a must-cop should prepare ahead of time and ensure they don’t miss the opportunity to purchase Matt Murdock’s fiery alter ego. Have the V-Bucks ready and waiting on your account ahead of the scheduled October 17 release date. Additionally, make sure to be available at some point during Daredevil’s time in the Item Shop. If you aren’t able to access your account on October 17 or the day after, have a trusted family member or friend ready to log onto your account and make the purchase for you.

Worst case scenario, Daredevil will likely return later in the season. Epic Games would be tossing away money if they chose to lock these skins away after one appearance. The vigilante hero will certainly be back. Toward the end of the season, Epic Games might even throw Daredevil in with a bundle of other Marvel icons like Captain America or the Silver Surfer. We've seen it before.

Will There be a Daredevil Glider, Pickaxe, and Back bling?

When Daredevil does finally arrive in the Item Shop, he won’t be alone. Daredevil’s glider, pickaxe, and back bling have been found in the game files. The full Daredevil Bundle includes: 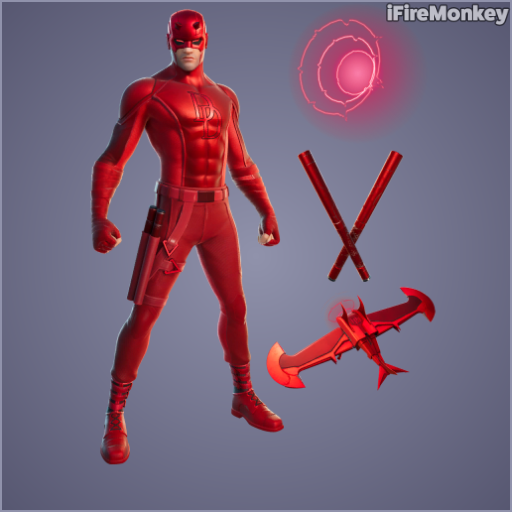 If it’s anything like the Silver Surfer Bundle, the Daredevil Bundle will allow players to purchase the full set for a discounted price. In Silver Surfer’s case, the Silver Surfer Pickaxe and glider were available separately for 800 V-Bucks each. However, the pickaxe, glider, and skin could be purchased in a bundle for just 2,200 V-Bucks. If the goal is to complete the whole set, this would save 800 V-Bucks.

It’s refreshing to see the different methods of unlocking The Man Without Fear. Daredevil can be unlocked for free by those willing to put in the effort. Otherwise, Daredevil will be purchasable in the Item Shop for a reasonable price. Either way, Make sure to play at least one match of the Daredevil Cup and the three future unannounced cups to unlock the Nexus War Glider. Finally, keep an eye out for more information related to the unannounced Marvel Knockout Super Series tournaments. Venom, Black Panther, and more could be on their way.