With Epic Games making the most of its massive fanbase, players are dying to know what's in the Fortnite crew subscription and how much it costs.

As Epic Games continues its monopoly of the highly contested world of battle royale games, Fortnite is powering ahead with its revamped Chapter 2 Season 5. Epic Games Worldwide Creative Director Donald Mustard had already teased that Season 5 would change the game forever, and while some took this to mean in terms of storyline, the company also changed the way we part with our real-world cash. With Season 5, Epic introduced the Fortnite Crew membership, which is effectively a monthly subscription service to keep players engaged.

Fortnite Crew has just entered its second month and seems to be a well-received addition to the game. There were previously canned ideas for a yearly subscription service, but with Fortnite Crew, it seems to have adapted this with the feedback of players. If you want to sign up for Fortnite Crew, here's what you need to know.

Fortnite News
@FortniteINTEL
Green Arrow's set name has now been fixed
Fortnite Crew V-Bucks are still delayed for many players while Epic work on the issue. 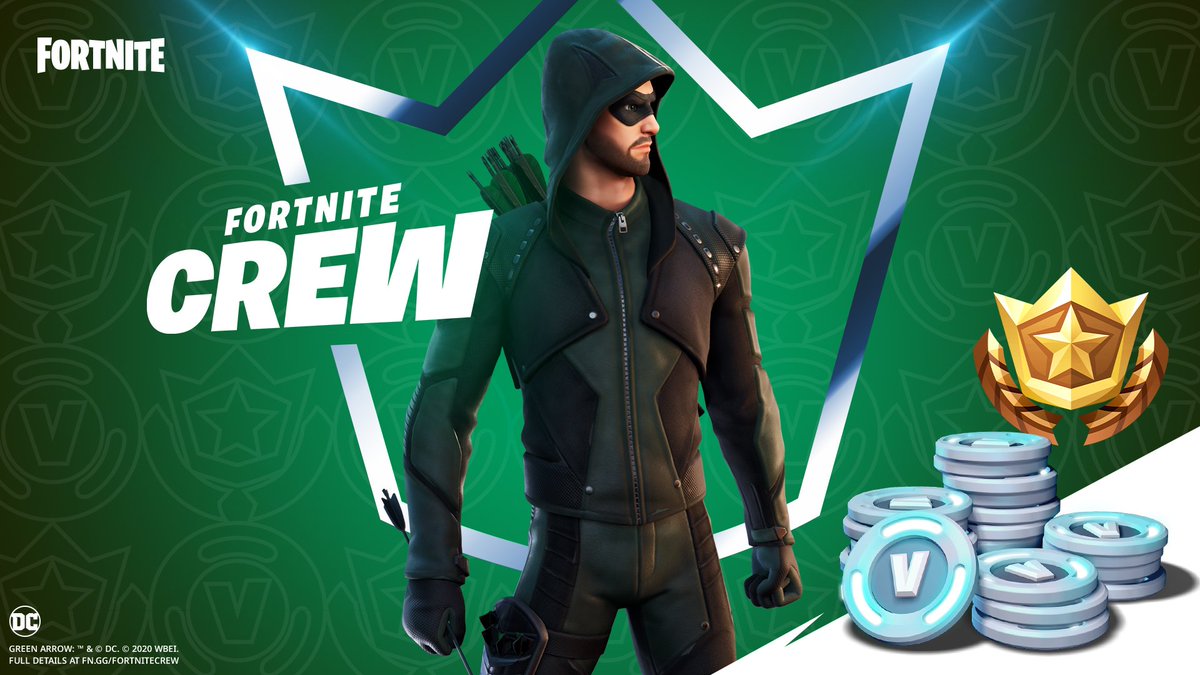 One of Fortnite's big pulls has been the ongoing Battle Pass, which tasks players with grinding through 100 tiers of increasingly challenging unlocks and challenges. The Battle Pass typically last around three months and costs 950 V-bucks/$7.99/£6.49 - making it reasonable value for money. Fortnite Crew unlocks the full Battle Pass and gives you an exclusive skin every month. So far, we've had the Galaxia Outfit and Style in December and Green Arrow in January. As part of the package, you'll be able to make the most of the "exclusive Fortnite Crew Pack each month with an always-new Outfit Bundle that only Fortnite Crew members can get".

We don't know what's coming in February 2021, however, there seems to be a recurring theme of pop culture characters alongside Fortnite creations. Epic has promised Fortnite Crew skins will “will never be sold or given away to non-Crew members", meaning you can lord it over others with your snazzy skins that they'll never be able to own. It's important to remember the Fortnite Crew is associated with the account you bought it through. Although you'll be able to use your Green Arrow skin even if you normally play on PlayStation, your 1,000 free V-bucks might not show up.

How much does Fortnite Crew cost?

Crash
@YTCrashDarkEye
So I've been waiting for Rex to come back. He's in the item shop rn. I bought the Fortnite Crew Pack and I didn't get my vbucks. Why Fortnite WHY
0
0

There's been a large number of fans who wanted to give Fortnite Crew a chance before deciding if they'd continue their subscription. Thankfully, you can cancel at any time as a tempting offer. For those who want to cancel their Fortnite Crew, they can head to the Fortnite Crew page in-game and be guided through the cancellation process. If you want to draw back your bow as Green Arrow, you'll only have until the end of January to sign up to Fortnite Crew and add him to his locker. A whole new Crew Pack will be coming in February, but we'll have to wait and see who else is joining the party. Will you be signing up for Fortnite Crew or continue to carve your own path?