After this kind of pre-season performance, the Uprising are built differently.

The Steel Series Invitational gave Overwatch League one of its best pieces of pre-season content to date. Not only did we see three of the most anticipated teams in the western region, we saw quite the diverse metagame, one that the Boston Uprising creatively wielded. On the cutting edge sat a team in need, a team that has needed a pick-me-up for ages.

The Boston Uprising flexed their 2021 roster and showed the world they’re much more than some new roster. The new-look Uprising has teased some surprising depth that could catch teams off guard, case in point; their Genji composition.

While the Boston Uprising didn’t win the Steel Series Invitational, it did put the Overwatch League on alert. From this point forward, teams are going to have to put some serious respect on both Kim "Valentine" Byeong-ju’s Genji and the 2021 Uprising coaching staff. What should warm the hearts of the community is how far out of the box the Uprising was thinking to tackle what looks to be the metagame for the western region. This composition is far more than just a Valentine Genji showcase; this is a taste of what the 2021 Uprising are bringing to the most competitive Overwatch League season to date.

When you first glance at the Boston Uprising's creative look, it seems hyper-focused on enabling the Genji, and while that’s not entirely wrong, there is more depth to how and where we saw the composition.

With so much pressure put on the opposing team, this allows Hong "im37" Jin-ui much more freedom to put himself in power positions on picks like Ashe and McCree. With the enemy’s attention focused primarily on shutting down what looks to be the primary win condition, im37 can play a bit farther away from his team and be slightly more independent than those heroes normally allow.

While perhaps too much liberty was taken in some of their matches, causing him to be picked off first quite frequently, the point still stands; with the space that Boston’s frontline and off-angle Genji pressure provides, he can slowly rotate and create his own pressure in the neutral. However, if the enemy becomes too proactive and tries to engage, Boston has a litany of ultimates tailored to counter-attacking and punishing how the distance they’ve closed. 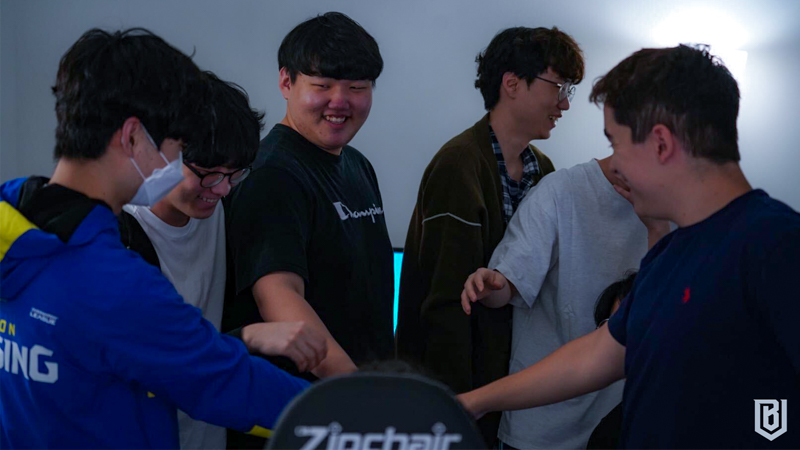 Take, for example, Boston’s second fight on King’s Row against the Paris Eternal. While the Eternal commits to engaging into the choke point and hamstring Boston as they attempt to set-up on the map, Valentine’s Dragon Blade paired with Seo "Stand1" Ji-won’s Supercharger thrives in the short-range brawl that Paris initiated in the first place.

To reiterate, Genji is a major focal point in the composition; however, the overwhelming pressure and resources this compositions demands in response—once it is set up and has map control—is what makes it so potent in the neutral game, on top of having some of the best team fight winning ultimates in the game.

One thing to note is where the Boston Uprising chooses to use the composition. Each position where the Uprising breaks out this creative Genji look is always on maps with great high ground angles that circumvent tight chokepoints. From here, Boston aims to have Valentine play the off-angles while slowly winning the health bar war of attrition. From there, they aim to slowly clear the choke point and allow their hitscan to set up their own off-angle, snowballing the pressure even further and funnelling the enemy into a corner.

When attacking King’s Row Point A, teams are forced to fight through a massive choke point. While the bulk of the composition can’t necessarily circumvent the narrow entry, Genji is able to abuse his access to high ground and freely build his Dragon Blade. However, past that point, the Uprising do a fantastic job of opening up as many attack paths as possible. Not only does this divide the attention of the defence, but this also actively fights the opposing Mei’s Ice Wall. On top of that, Valentine does a fantastic job of both keeping the McCree out of his line of sight while still being able to pressure from a high ground angle.

While Hanamura doesn’t have the split crossroads that King’s Row has, its chokepoint is so important that Boston was able to utilise the composition on both attack and defence to pull attention and create alternate attack paths.

On attack, Valentine would be sent over through Window to pressure from the backside. While on defence, he can threaten to flank from behind and if by chance the attacking team pushes into the courtyard, he’s able to use the high ground adjacent to the point as well as on the point itself to pester any unsuspecting support players. It’s also important to note that in positions with more limited paths of attack or with ones that are more prone to proactive brawls, Kim "Faith" Hong-gyu will move to Brigitte over the initial Baptiste. This still allows the Uprising DPS to expand out across the map, while also granting them a slight buff towards the close range engagements they need to win to enable that.

When it comes to Eichenwalde, Boston’s first fight against the Los Angeles Gladiators not only shows the power of their creative composition, but is also a testament to Boston’s continued iterative process brought on by their coaching staff.

Bringing in Kelsey "Colourhex" Birse on the McCree proved to be some of the best foresight Overwatch has seen recently as the Gladiators pushed straight through the chokepoint and attempted to deny both the assumed Ashe and Genji the off-angle sightlines they so desired. However, with McCree and the healing throughput of a permanently Inspired Brigitte alongside Seo "Myunb0ng" Sang-min’s impeccable Ana play, they outlast the aggressive shove and take the first point easily.

Another impressive example to highlight is Boston’s rotation after their fight to enter Point B. Taking high ground control enables the bulk of the Uprising’s composition to overlook the Gladiators if they choose to exit the spawn and attack the cart directly across the bridge. If Los Angeles attempts to contest Boston’s high ground control, their position is too narrow for their entire team to really engage. Gladiators limited surface area makes it difficult to quickly win the fight while giving Leyton "Punk" Gilchrist a perfect opening for Gravitic Flux.

Through Boston’s constant and creative iteration, this opens up the concept of “questions” or threats your opponents have to correctly deal with, or they suffer the consequences.

Decide to push aggressively against Boston’s Genji and Ashe? The enemy team has to pick the correct timing, land the proper Ice Wall, and have the correct focus fire, among other things. If it proves to be too strong, then Boston can swap Faith and Colourhex on Brigitte and McCree, respectively.

What if the enemy plays passively into the Uprising’s composition? Then Boston takes map control, pressures them into a corner and either forces errors or dries the enemy out of resources.

And if by chance none of the above win conditions seems to land, they can always bank on Valentines’ Dragon Blade having impressive value, not only because he is a mechanically strong player, but because the metagame doesn’t give the defending team many baseline resources in dealing with it. Once Immortality Field is used, and Flashbang is gone, Valentine doesn’t need much else to cut this team down to size. And if by chance the enemy has a strong defensive support ultimate available, they can always pair it with Supercharger or Nano Boost as they make their attack.

In a league with little in the way to differentiate its teams’ styles, this pre-season teaser from the Boston Uprising should have us all buzzing. Can we expect more out-of-the-box compositions from one of the league’s veteran franchises? Is this something that Boston can wield to finally return to their competitive ways? Will Boston’s macro strategy become as multi-faceted during the regular season? An exhibition event shouldn’t hold all that much weight, but when you have a team in need, these last few seasons show something so promising and creative, you can’t help the feeling of wanting to look at this team in a different light.

The 2021 Boston Uprising are built different, but we’ll have to wait until April 24 to tell how different.