With Gotham Knights poised to be one of 2021's biggest games, the title's release date has been potentially leaked.

Warner Bros. Montreal is lighting up Gotham City and projecting the Bat-Signal into the night's sky with Gotham Knights. While we've sadly left the acclaimed days of Rocksteady's Arkhamverse behind, W. Montreal is taking over with a spiritual successor in the form of Gotham Knights. Charting the dark days after Bruce Wayne's death, the Bat Family is forced back together to protect the crime-riddled city from the Caped Crusader's rogues gallery.

Rocksteady rounded off its own story with Arkham Knight in 2015, and while many thought a fourth game was in the works, the studio has instead shifted focus to the upcoming Suicide Squad: Kill the Justice League. Following WB Montreal's work on the often forgotten Arkham Origins, Gotham Knights looks like it will take the best of the Rocksteady days and chart a new era of next-gen games with this ambitious co-op title. There's plenty of hype surrounding Gotham Knights, but we're all asking, when's it going to be released?

What is the Gotham Knights release date?

James Sigfield
@Jsig212James
Possible @GothamKnights release date/window leaked by UK retailer The Game Collection.
It is listed as July 31st 2021, but seeing as how the date is a Saturday, it's possible the date is a placeholder for the release month of July. 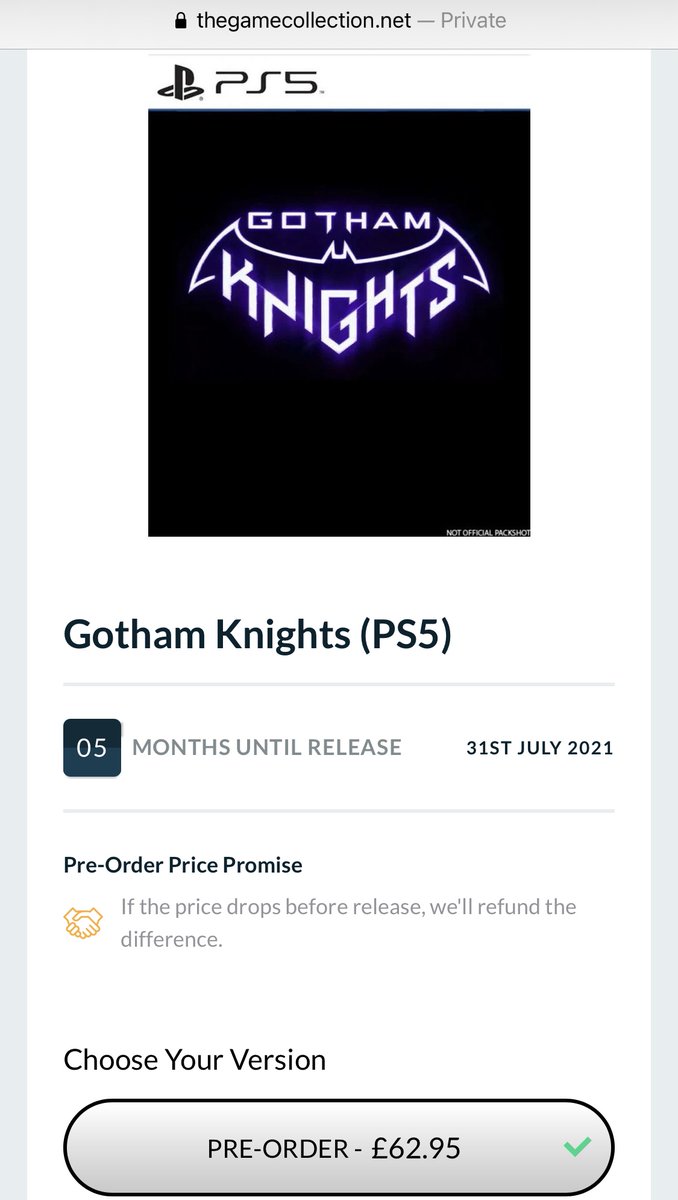 The latest leaks claim to have figured out the Gotham Knights release date - well, for PlayStation 5. UK site TheGameCollection.net has the PS5 version listed for a July 31 release date. While that's subject to change, the reputable retailer seems pretty confident with the listing, and at the time of writing, it's still live. Better yet, you can currently pre-order the game from there for £62.95/$88.16. That's a pretty steep price, but remember, we're currently in the midst of a hot debate about whether next-gen games will see their price tags rise.

We also know Gotham Knights is coming to Xbox Series X/S and current-gen consoles PlayStation 4 and Xbox One. Although it's a reasonable guess that it will launch on all four platforms at the same time, we could see it drop earlier on the PS4 and Xbox One like Cyberpunk 2077 and a number of other big titles did at launch. It's no secret that making a game ready for next-gen is a hard job, so we've seen a lot of publishers get it out as early on possible on current consoles while offering an upgrade when the time's right for next-gen.

Irogen
@IronGamer15
Gotham Knights? More like Gotham Mournings bc I mourn everyday that I don't know the release date lol
2
22

A July 31 release would put Gotham Knights right in the second half of the year and a nice space to rake in the sales in time for Christmas, but is it the real deal? Many have noted that July 31 is a Saturday. Games never release on a Saturday, let alone a AAA title like Gotham Knights. The suggestion is the date is a placeholder that will be changed nearer the time - possibly for the retailer to drum up pre-orders and get page clicks.

Following its all-star reveal at August's DC FanDome, players have been clamouring for more information on Gotham Knights. We at least know the reboot will be bigger than the previous Arkham games and will be set over a series of nights instead of the usual one night of chaos Batman had to contend with. Things are presumably ticking along nicely for a release this year. The rumoured Gotham Knights release date comes just after WB Montreal was hiring an "Associate Manager of Brand Marketing" and a "Submissions Specialist" to work on the game. These developments suggest we'll know more soon.

When it comes to July 31 as a specific date, it's not too far outside the realm of possibility. The official GK Twitter teased July 2021 last year, so it's likely TheGamesCollection.net cottoned on to this and decided to get the jump on the competition. They could have insider information, or it could be a simple mistake. Either way, we can't wait to suit up in lycra as Batgirl and leap across the Gotham City skyline.