A zany GoldenEye 007 and Super Mario 64 crossover mod brings the two iconic titles together as the perfect N64 game for the ages.

For England Mario, for England. Just when you think you couldn't love Rare's GoldenEye 007 more than you already do, along comes some clever modder to combine it with Super Mario 64 as the ultimate Nintendo 64 game we wish we'd been able to play. GoldenEye 007 was introduced back in 1997 and is widely regarded as one of the best shooters of all time. With this in mind, why wouldn't you want to play it all over again with a different spin?

When looking at the N64, few titles had as much of an impact as Super Mario 64 and GoldenEeye 007. Alongside The Legend of Zelda: Ocarina of Time, the three made up a trio of defining games for the beloved system. While GoldenEye's Soviet backdrop and Mario climbing the floors of Princess Peach's Castle are a million miles apart in terms of tone and aesthetic, they work surprisingly well together. GoldenEye 007 mods are nothing new, but this could be one of our favourites

What is the GoldenEye 007 and Super Mario Crossover?

Consider us shaken (but not stirred) by StupidMarioBros1Fan's "GoldenEye With Mario Characters" mod. It was originally launched in January 2018, and to mark the three-year anniversary, they've just dropped a huge update that adds a Princes Peach's Castle level. It's made using the existing Egyptian level from GoldenEye 007, which itself was a hidden unlock after you'd completed all other missions as 00 Agent.

YouTuber Graslu00 has tried out the GoldentEye 007 and Super Mario 64 crossover for themselves and shared the footage in a nine-minute video. There's a macabre Mario moment we see James Bond swapped out with the plucky plumber and shoot up a room full of Koopas as they slump to the floor as lifeless turtles. To be honest, we're completely here for it. After all those years of trying to rescue Peach, we're not surprised Mario has finally snapped. 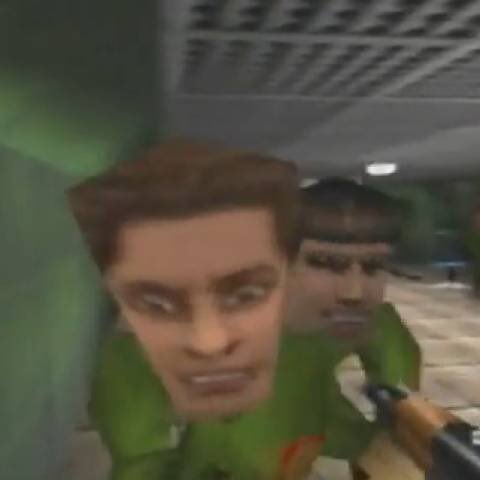 In the video, Mario skulks his way around Peach's castle with a silenced PP7 and perfectly captures those iconic GoldenEye 007 mechanics that made the OG such a hit all those years ago. Even though you can't gain access to the wide array of Mario worlds from Super Mario 64, it's a faithful recreation of the adventure game's main locale. For those wanting one of those Mario boss battles, you're also covered.

Behind the giant door is a brutal face-off with Bowser himself. After picking up the Golden Gun, Mario has to take on the big bad himself. In this world, is Bowser supposed to be General Ouramuv? Would that make Princess Peach Natalia, Luigia Alec Trevelyan, and Daisy Xenia Onatopp? Personally, we'd like to imagine Toad as some sort of hardened version of Judi Dench's M - sitting behind a desk in the Mushroom Kingdom and running a department of spies against the villainous Koopas.

Mainly, the GoldenEye 007 and Super Mario 64 crossover makes us want to jump into Rare's title all over again. Sadly, rumours of a modern remake have never amounted to anything, while a recent fan project to recreate the game in the Unreal Engine 4 being shut down. IO Interactive looks like its moving from the Hitman franchise to something 007-related, so here's hoping the devs take some hints from GoldenEye 007.

If you want to try out the Mario mod and come up with your Super Mario spy fan fiction, you can pick it up from N64 vault.