Coronavirus fears have infiltrated the esports industry. Several gaming events, such as tournaments and conventions, are being postponed and cancelled, in response to COVID-19 concerns.

The Apex Legends Global Series Major #1 was due to be played out live at the Esports Stadium in Arlington, Texas between March 13-15th, but has been postponed. In a statement from EA, they state “due to the current situation with the novel coronavirus (COVID-19) and its impact, not just on the gaming industry but the entire world, we are postponing the [event]”.

While the live playoffs have been pushed back, the next set of Online Qualifiers are still scheduled for March 21st & 23rd.

Another large scale esports event has also come under the COVID-19 hammer; the EA Sports FIFA 20 Global Series. The FUT Champions Cup Stage V, set to take place in Bucharest on April 3rd to 5th has been cancelled.

It isn’t just tournaments that are taking extreme measures to protect their fans from Coronavirus, however, as even conventions have followed suit, with the recent cancellation of TwitchCon Amsterdam, which was due to occur on the 2nd and 3rd of May.

This decision hasn’t come lightly, with the official statement reading; “We have been monitoring Coronavirus concerns and having weighed the potential health risks to our community we’ve made the incredibly difficult decision to cancel TwitchCon Amsterdam.”

The Overwatch League hasn’t slipped away unscathed either, as Blizzard announced the China-based games due to take place in March were cancelled due to the outbreak in the country. 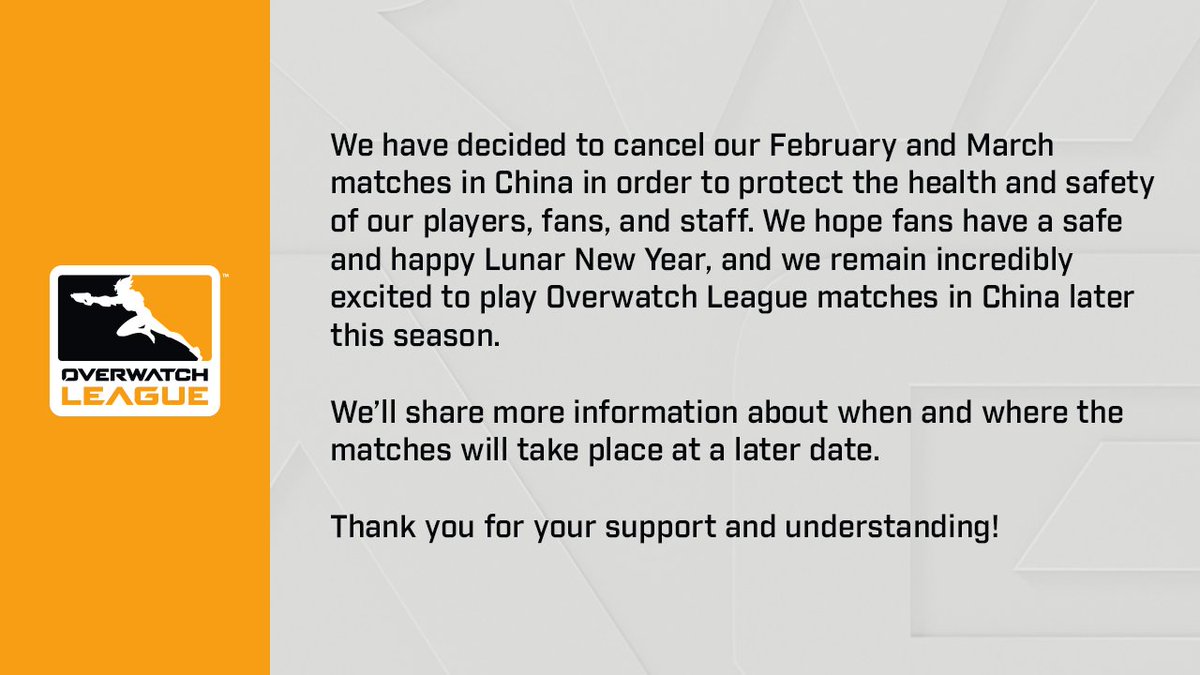 Other conventions and tournaments could also be at risk, including the CDL (Call of Duty League), and the London Games Festival. The London Games Festival is set to take place in the capital on the 26th of March up until the 6th of April, but, so far, no statement has been released regarding the status of the event. There has also been no tweets from their official account in over a week, leading to concerns that the event may be in jeopardy.

The CDL has scheduled matches all throughout Spring and Summer, travelling from USA events to Europe. Only time will tell if any of these events are postponed, or even cancelled, due to Coronavirus fears.

The latest game to be hit by health and safety concerns is League of Legends. Only a few days ago the upcoming tournament, the 2020 LEC Spring Finals, was moved from Budapest to the LEC Studio in Berlin. Today (March 10th) Riot Games has also been forced to push the 2020 Mid-Season Invitational from May to July, due to growing concerns over Coronavirus. In a statement on lolesports, the publishers explain their decision to shift the dates, saying “shifting the tournament to the summer offers the best chance to see travel restrictions lifted, allowing teams from leagues around the world to travel and compete safely.”

We’ll be sure to update you on any and all tournament and convention changes, postponements, and cancellations, so keep checking back at GGRecon.