The time has come, the Devourer of Worlds has finally got the Fortnite map in his sights. Since long before the Marvel-themed Fortnite Chapter 2 Season 4 kicked off, players of Epic Games' battle royale favourite had heard whispers that Galactus would be the big bad.

As one of the biggest (literally and figuratively) villains to grace the pages of Marvel Comics, it made perfect sense that Galactus would be the de facto villain of the supersized Season 4. Tossing aside critiques that Fortnite is a "dead game", Chapter 2 Season 4 has reinvigorated the title's fanbase with everything from colourful points of interest to superpowered Mythic Weapons, engaging storylines to some of your favourite faces from the Avengers and beyond.

Even as the sun starts to set on this season and the Battle Pass, Epic is still hurling out more content thanks to the last-minute arrival of Venom. While we've been rightly asking what it's all leading to, it sounds like the Galactus "Devourer of Worlds" event will be Fortnite's very own Avengers: Endgame.

Fortnite Galactus Event: What is it?

iFireMonkey
@iFireMonkey
Multiple files were added relating to "RockyRidge".
After talking with some people, it appears this was used back in Season X for the Lobby version of the Black Hole event.
Two strings are in the files related to this;
To be Continued...
In Season 5 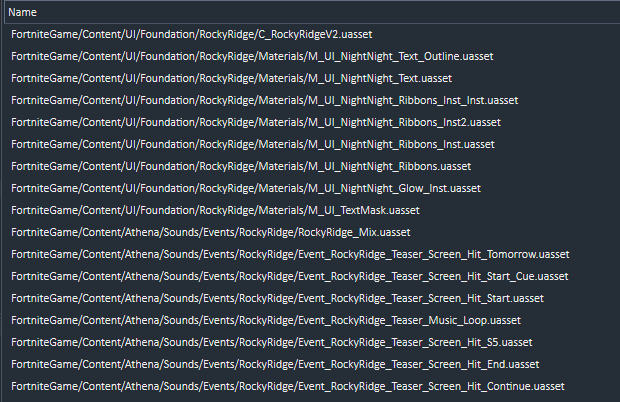 Epic Games Worldwide Creative Director Donald Mustard had already teased that Season 5 would change Fortnite forever, and by the sounds of it, Season 4 is giving the cue to more than just some Christmas content. While the 14.60 update brought the Venom Cup to the Marvel Knockout Super Series and made sure Fortnite was ready for next-gen consoles, the code was also getting ready for something altogether bigger.

The live event will be the first since Season 2's "The Device", but rest assured "Devourer of Worlds" will be a lot bigger. Trusted dataminer iFireMonkey explained how there are a number of game files relating to "RockRidge" - which just so happened to feature in the lobbies of the catastrophic Chapter 1 Season X. It was during "The End" that the Zero Point sucked the OG map into it and eventually spat out the Fortnite we've come to know since.

Players have been trying to harness the power of Zero Point ever since, and if Galactus is as powerful as he makes out, he could be the one to do it. The idea of him living up to his Devourer of Worlds moniker and overhauling the map once again is all too tempting.

Added to this, reputable streamer Alastair "Ali-A" Aiken told us all to look for a mysterious light shining off the edge of the playable area, hinting that Fortnite could be about to get a map expansion.

Fortnite Galactus Event: What else do we know?

Lucas7yoshi - Fortnite Leaks
@Lucas7yoshi
<<<Minor Event Leak>>>
The event will be called "The Devourer of Worlds"
"Defend the Island to save all Reality!"
86
1815

Elsewhere, @Lucas7Yoshi gave us a tonne more information alongside the reveal of the Fortnite Galactus event name. They said it will come with the mantra of "Defend the Island to save all Reality!". This description fits neatly with the idea Galactus is from a different reality and would explain those rifts that have been gifting POIs all season. They also showed off the revamped Battle Bus that proves Tony Stark has been busy tinkering away, possibly making it ready for interdimensional travel.

Finally, Galactus himself will eventually appear in the Battle Pass screen. It's been months of waiting and watching Galactus grow slightly bigger in the sky, but if the latest 3D models are to be believed, he's going to be huge. It all comes together with a rumoured release date of November 28. This would give players a few days to (hopefully) topple this intergalactic tyrant before we head into a new season.

With Epic clearly planning such a massive end of season event, it's fitting that Galactus will get to keep his galactic size. As Galactus heads toward the map, one thing's for sure - he's feeling hungry.