Discover what Chapter 2 - Season 6 has to offer with a new wave of Fortnite challenges.

Seasons change, but one thing remains the same - challenges. Each season of Fortnite brings with it a new campaign of challenges.

Challenges offer players a creative and interesting way to earn bundles of XP. Completing challenges is essential for levelling up the Battle Pass and unlocking exclusive skins like Lara Croft and Raven from Teen Titans.

Chapter 2 - Season 6’s first week of challenges is basically a mini-tutorial on Season 6. Players will learn about the new wildlife and how to craft. Also, Week 1’s challenges will take players to some of Season 6’s new locations.

Without further ado, let’s take a look at our Challenge Guide below for an in-depth breakdown of every single Week 1 challenge and the best course of action for completing them.

As Fortnite returns to the prehistoric era, tons of different Wildlife species have emerged on the island. Chickens, Frogs, Boars, Wolves and more now roam the Fortnite map.

Players will need to hunt down five of these creatures to complete the first challenge of Chapter 2 - Season 6.

These animals can appear anywhere on the map, but there are a few different habitats that they usually reside in. Chickens and Boars can be found near farmland, Wolves near forest and mountainous regions, and Frogs near swamps and wetlands.

Chickens and frogs will flee from players, while Boars and Wolves will attack. Keep this in mind during your hunt.

Eliminated Wildlife will drop precious resources that can be used in Chapter 2 - Season 6’s new Crafting System. Acquiring these resources will be necessary for completing some of Week 1’s other challenges.

Primal Weapons are a new category of weapon introduced in Chapter 2 - Season 6. Players will need to craft three of these weapons using the new Crafting System.

Hunt down various Wildlife until you acquire an adequate amount of Animal Bones. Fuse the Animal Bones with a Makeshift Weapon to upgrade it into a Primal Weapon. Repeat these steps three times to complete the challenge.

Another new item introduced in Chapter 2 - Season 6, the Hunter’s Cloak is the only craftable item that isn’t some type of weapon.

For simplicity’s sake, players may want to target a Boar for this challenge. Boars drop the exact amount of resources needed to craft a Hunter’s Cloak. Eliminating one Boar will reward the player with two Animal Bones and one piece of Meat.

Use these items together to craft the Hunter’s Cloak.

Anyone that’s played Fortnite the past couple of seasons should be familiar with characters. Characters aren’t anything new to Fortnite. These friendly non-player characters (NPCs) are posted up all over the island. NPCs offer players various services such as the ability to purchase in-game equipment, accept bounties, or hire them as bodyguards.

There are 47 NPCs in total scattered around the Fortnite map. Refer to the image below for the exact locations of all NPCs. Interact with three of these characters to complete this challenge. 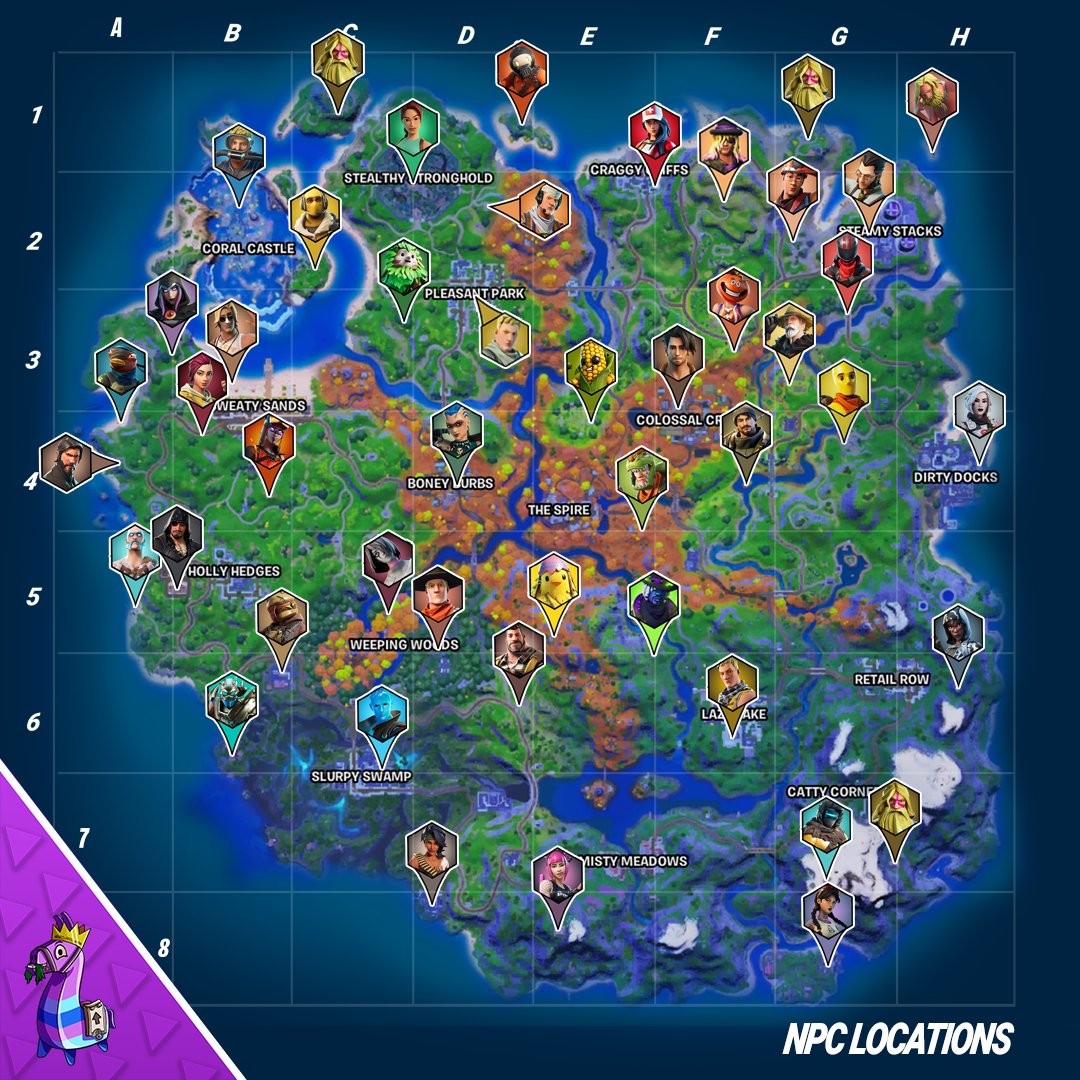 Mechanical Parts are similar to Animal Bones in that they are used to craft weapons through Season 6’s new Crafting System.

While Animal Bones are collected via hunting Wildlife, Mechanical Parts come from salvaging man-made creations like vehicles and trailers. Harvesting vehicles, trailers, buses, and tractors with a pickaxe will reward the player with Mechanical Parts.

Some prime locations to find Mechanical Parts include Retail Row, The Orchard, and Weeping Woods. These three locations are flush with cars, trailers, and tractors.

Now that you’ve acquired a few Mechanical Parts, this next challenge requires players to use those parts to craft Mechanical Weapons.

Mechanical Weapons require four Mechanical Parts and a Makeshift Weapon to craft. Craft up three of these powerful weapons for a reward of 24,000 XP.

This challenge requires players to visit one of Chapter 2 - Season 6’s new points of interest (POIs). The Zero Point has been locked in The Spire and is guarded by a Spire Assassin.

The golden Artefacts come in multiple shapes, from a mini statue of Kit to a llama's head. Additionally, the artefacts give off a bright, blue hue. It’s hard to miss them.

RubiksYT
@AliMahr80351446
Here are the locations of the golden artifacts near the Spire!