Epic Games has a Halloween treat up its sleeve as Fortnite Arena Duos have made their welcome return to the battle royale's competitive circuit.

If Epic Games is a master of anything, it's keeping Fortnite fans surprised. In the midst of the Marvel-themed Chapter 2 Season 4, we've already seen a deviation from the norm of spandex-clad superheroes with the beloved return of Fortnitemares, and now, it looks like we've been dished up another treat (not trick) in time for Halloween with Fortnite Arena Duos.

The tournaments have been coming thick and fast in Season 4 thanks to the Fortnite Champion Series Marvel Knockout LTM, and 1v1 box fights. However, as the season winds to a close, Epic has delivered one last gift to test your competitive streak. Just when you thought developers couldn't possibly cram any more content into Season 4, along come Arena Duos to reclaim their time in the spotlight.

Are Fortnite Arena Duos back in-game?

The idea of Arena Duos making their triumphant return was first teased when Epic addressed issues that Fortnite is a "dead game" with a Halloween-inspired side-by-side of Peely and a zombified Peely. This was followed by a Tweet that read, "1M@FNCompetitive Followers = Duos Arena". The concept of trying to hit a certain number of followers on Twitter is a neat trick and was recently used by the Mediatonic team over at Fall Guys: Ultimate Knockout.

When Epic made its milestone, there were questions over whether this was a Halloween prank, but nope, dataminers quickly revealed that Arena Duos were officially back in action. The Fortnite Competitive Twitter then followed this up with a tweet to confirm the good news. Logging in to Fortnite, you can scroll down to the Arena section and select either Solo, Duos, or Trios. You're welcome! 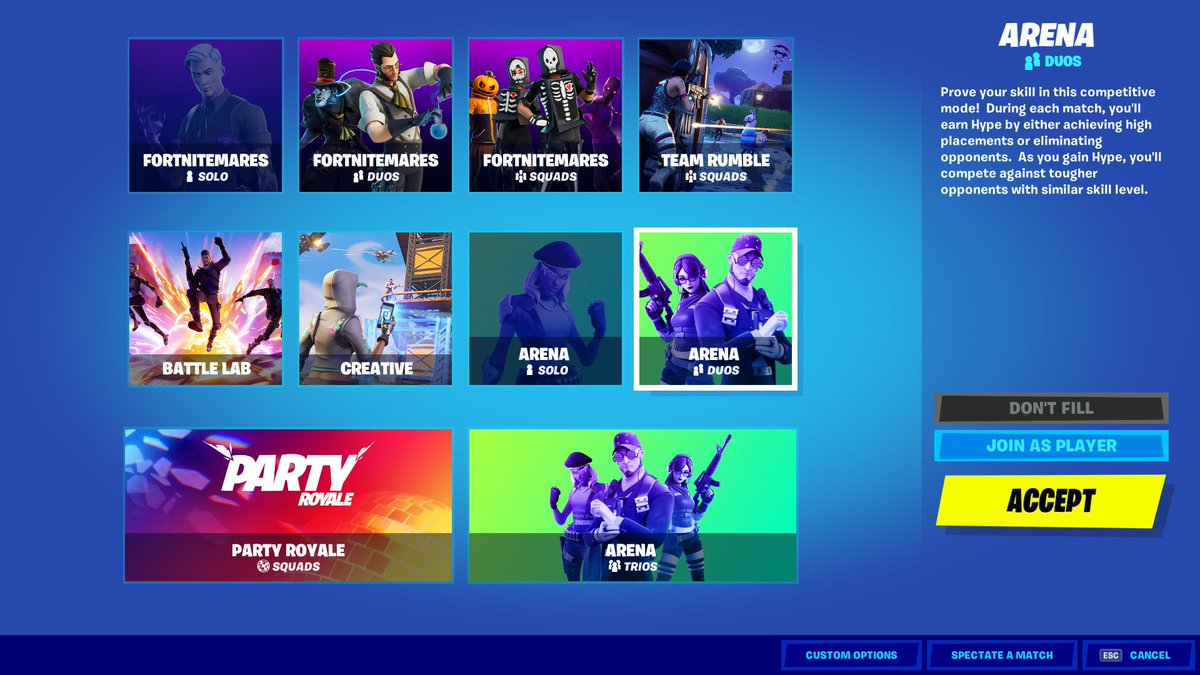 When it comes to Arena Duos, they were a fan-favourite addition to the game. With squads, four players working together means you could down an enemy before they had time to blink. The same argument can be made for Trios as you task one teammate with building and the other two with sniping opponents before they even know what's hit them.

Duos hit the sweet spot of usually having one of you on the attack and your teammate focussing their efforts on building. It was a tense mode that could see you and your BFF climb to the top, so it's no surprise players were vexed when Epic vaulted them.

A quick search of the internet will unearth a whole host of Change.org petitions you can sign to ask for Duos to return. With Winterfest 2020 just around the corner, the timing is also perfect for keeping everyone invested off the back of the supersized Marvel extravaganza.

Thanks to Winterfest, a whole wardrobe of Christmas skins, AND Arena Duos, it should set Fortnite up as a seasonal showstopper. There's no news on how long Fortnite Arena Duos will be sticking around for, so we'd make the most of them while you can!