Cooler Aqua has opened up about his Fortnite Champion Series Finals ban.

David "Aqua" Wang, or Cooler Aqua, is arguable one of the best players to ever drop from the battlebus. The former World Cup duo winner consistently performs at the top end of Fortnite esports, also racking up multiple FNCS Weekly victories alongside teammates "Noahreyli" and "Rezon Ay".

With the FNCS weekly tournaments nearing completion with the heats and Grand Finals coming in the coming weeks, Aqua has been on the receiving end of a crackdown from Epic Games. The 18-year-old Austrian has been banned for two weeks (14 days), ruling him out of the heats and grand finals.

According to the professional, the ban is a result of his outbursts on social media following a warning from the developers due to leaving a game before being eliminated. The "rage quit" breaks FNCS Terms or Services as it negatively impacts the other players in the lobby. Players who knock down opponents are not rewarded with the kill until they eliminate the enemy, meaning if the downed player leaves the game, they miss out on the points.

In response to the warning, Aqua has stated: "In one of my semi-fianl games yesterday I made a bad decision which violated Fortnite's competitive code of conduct. It was an action which I am not proud of and I know it can negatively impact other players in my lobby.

"I am sorry that I acted against my own competitive principles by leaving the game before being eliminated and I fully understand the warning which Epic gave me during the week 3 finals".

The warning was then swapped out for a 14-day ban due to the professionals outbursts via Twitter, which Aqua describes as "poorly timed" and "completely unexpected"

COOLER aqua
@aquaa
.@FortniteGame biggest joke company i have ever seen these guys still playing all 12 games prob without getting banned/disqualified and ofc because its benjy and savage they insta ban like what a joke
113
4995

COOLER aqua
@aquaa
so this is funny they never found my loot that means they would have never found me to shake me down anyways i love fortnite!
128
6781

He also added: "I am sad that I will be missing out on competing with my teammates in the FNCS heats and finals because of some tweets and I am hoping that Epic can re-evaluate their punishment. I will work to avoid being in this situation again in the future". 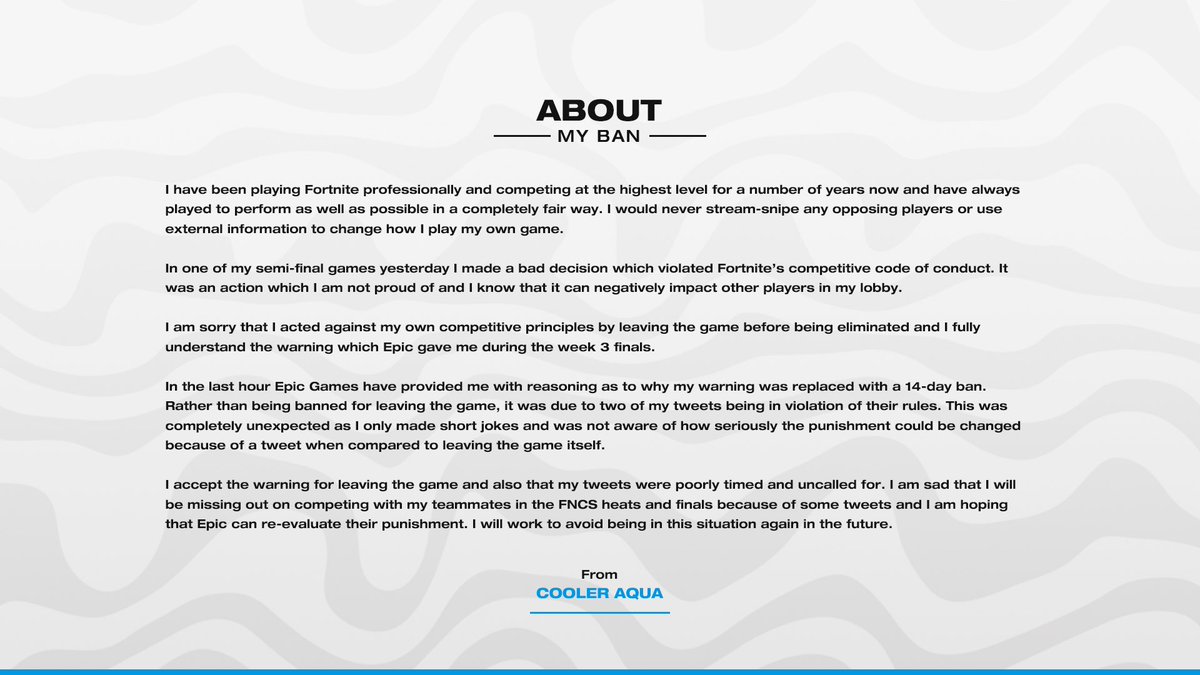 The FNCS Chapter 2 Season 4 heats are due to kick off within Aqua's 14-day suspension, deeming him ineligible for the finals.