After 28 years of DOOM games, would id Software ever consider adding a female Doom Slayer to the alien-blasting series?

As possibly THE defining first-person shooter, the world of gaming has a lot to thank DOOM for. Since 1993, we've blasted our way through waves of Pinkies, Spider Masterminds, and Cacodemons. While he might not be the chattiest of protagonists, we've also enjoyed 28 years of Doomguy/Doom Slayer as he's continuously tried to keep these hellish monsters at bay. Now, those behind the long-running shooter have revealed if we could ever expect a female Doom Slayer.

Heading back to 1993, women in video games were largely reduced to the damsel in distress role of Princess Peach. All that changed with Lara Croft and Tomb Raider in 1996, but even since then, we've come a long way from the triangle-breasted heroine. Following on from the success of DOOM Eternal in 2020, the game's Director has revealed whether we nearly had a female Doom Slayer in the most recent entry.

Could we see a female Doom Slayer?

Opening up about what happened to the idea of a female Doom Slayer, DOOM Eternal Director Hugo Martin expanded on the idea of players choose the lead's gender. We can easily see it being a similar mechanic to the likes of Mass Effect: Legendary Edition and Assassin's Creed Valhalla. Discussing the idea of giving DOOM a woman's touch, Martin said he'd want it to be more than just a reskin with a pair of breasts.

"I think if we did it, I’d want it to be lethal", said Martin. "I think it’s interesting how it would impact the glory kills, the kind of weapons that she would have, the fighting style. All aggression, absolutely, but a different type of aggression. I would really strive to allow it to impact the gameplay in a way that was meaningful".

Continuing about what he envisioned it could look like, Martin added, "When it comes to designing the action, you think about if the Slayer is a Ferarri, well then, what would a female Slayer be, what would a Medieval Slayer be...What sort of analogies could you draw from that allow to influence the experience". Although it's far from confirmation we'll see a female Doom Slayer in the next game, it's an idea Martin is on board with.

Will we see a female Doom Slayer?

Secluded Demiurge
@hiddendemiurge
I'm all for a Female Doom Slayer, but ONLY if it's Crash. The perfect set up is right there; "Once, she was Doom's military instructor. Now the Arena Eternal tests Crash's mettle to the extreme patience. She is the trainer who introduces new warriors to the skills of battle." 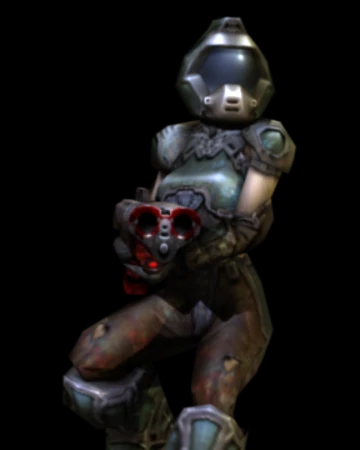 Buckio
@Buckio6
Y'know I've always wanted to see another doom slayer take the title after doom guy's story was over. Having crash for example becoming the first female doom slayer would be awesome to see and play as
0
0

MidnightTheSpartan
@MrMidnai
Female Doom Slayer according to Hugo Martin.
- Different weapons
- A different type of agression
- Lethal
- Different Glory Kills
Hugo thought about this idea a lot. In my opinion, Id should go with it. Add some variety to Doom Eternal's multiplayer.

The idea of female Doomguy is something Martin said he's "put a lot of thought into", suggesting it COULD be something we see further down the line. As DOOM approaches its 30th anniversary, there's a reinvigorated love for the series thanks to the 2016 reboot. DOOM isn't known for delivering a lead we can really get behind, but then again, Halo's Master Chief isn't exactly a talker.

Martin's words quickly popped off online, with players reminding us the expanded world of DOOM lore spilled over into the Quake games. Here, Doomguy had a female mentor. In Quake 3Arena, it was established the character called Crash trained Doomguy, so who knows? The 1999 multiplayer game introduced Crash into the canon and saw her affectionately referred to as Doom Girl, Doom Lady, and Doomette.

DOOM Eternal received critical and commercial acclaim, won a slew of Game of the Year awards, and even had a post-release DLC. Although there's no concrete word on a sequel, one has to be on the cards. If we see a female Doom Slayer in the next entry, we're imagining a sort of Sergeant Calhoun from Wreck-It Ralph. Considering the Metroid series' Samus Aran looks a LOT like Doomguy, we also think a crossover between the two worlds is a magical marketing move just waiting to happen.

For the time being though, we're stuck with the strong and silent Doomguy to save us from total annihilation.