He experienced the lowest lows. Now, he stands on top of the world.

Lee "Fearless" Eui-Seok stands at the heart of the word “fearless.” It’s still so surprising that circumstances like his occur, that someone that chooses a moniker, lives to see it become real in an uncanny way. His journey into the league has been about heart and a true competitor’s stubborn grit. He’s come up as a strong prospect, been branded by the worst losing streak in esports history, was moved down to the amateur league, and has come back to the top alongside the best team in Asia. This is why we cannot forget about Fearless.

In a mini-documentary charting the growth of Element Mystic through APEX Challengers Season 5, coach Jeong "Levi" Chung-Hyeok spoke fondly of Fearless and his ability to lead. “The strength of Fearless is that he can boost up the team morale even when the mood is down. He’s a great leader, and sometimes we call him the main tank in the actual world.”

Fearless and Element Mystic would leap onto the global stage as they swept the 2017 South Korean World Cup team in a show match. A team that was relatively unheard of just upset some of the best players in the world and Fearless was leading the charge. On top of that, Element Mystic was leading the pack in the second phase of groups in APEX Challengers. With his kind of potential, it was only a matter of time before someone took notice of this young main tank’s abilities.

2018 saw the birth of the Overwatch League and the Shanghai Dragons. Unfortunately, history does not remember this iteration of the Dragons fondly. By the end of Stage 1, the Dragons sat at the bottom with a 0-10 record with a 6-36 map record. To say they were in dire straits would be an understatement.

Backed up against the ropes, the team decided to call in some much-needed help. On February 13th He "Sky" Junjian, Kim "Geguri" Se-yeon, Chon "Ado" Gihyeon and Fearless joined the team to not only help the franchise triage their season but also score their first win. Without going into every painstaking match, Fearless and the 2018 Shanghai Dragons did not win a single game in their 40 outings.

Weida "Diya" Lu, Geguri, and Fearless were spared from the culling as the Dragons restructured their competitive roster. These three players were set to be the foundation to build the 2019 Shanghai Dragons—or so we thought.

On February 8th, 2019, ESPN.com released news that Fearless was set to miss the start of the 2019 season of the Overwatch League due to “a health condition.” This left the Dragons without a starting and experienced main tank. Veteran player Noh "Gamsu" Young-jin would be transferred from the Boston Uprising to the Shanghai Dragons on short notice to fill in Fearless’ absence. On April 11th, with his fate left up in the air, the Shanghai Dragons transferred Fearless to their academy team, Team CC. Fearless now found himself back in the trenches of the amateur division, failed entry into the Overwatch League.

Overwatch Contenders China isn’t the pinnacle of Overwatch competition, but it has a certain creative flair, a flair that Fearless would have to learn to reconcile with. Fearless and Team CC’s first outing together would be during Overwatch Contenders 2019 Season 1: China. There, Team CC finished towards the middle of the pack in Group B under the likes of LGE.Huya and Flag Gaming. Unfortunately, they would ultimately fall to Bilibili Gaming in the first round of playoffs.

However, Season 2 of Contenders China saw a much more stable and fleshed out Team CC take the reigns. Fearless and his team would finish as the first seed in Group A and would ultimately finish second in the playoffs behind LGE.Huya.

This growth would continue into 2020 as the team competed in their domestic seeding tournament. This saw Fearless return to the stage as a standout main tank for Team CC with his signature pick of Winston. Again, his skills would warrant a rebirth. He was better than the amateur leagues and people were once again taking notice.

Shanghai Dragons
@ShanghaiDragons
One more thing...
Guess who's back
Back again
Fearless is back
Tell a friend
We're pleased to welcome Fearless back to the main Dragons roster! (1/3) 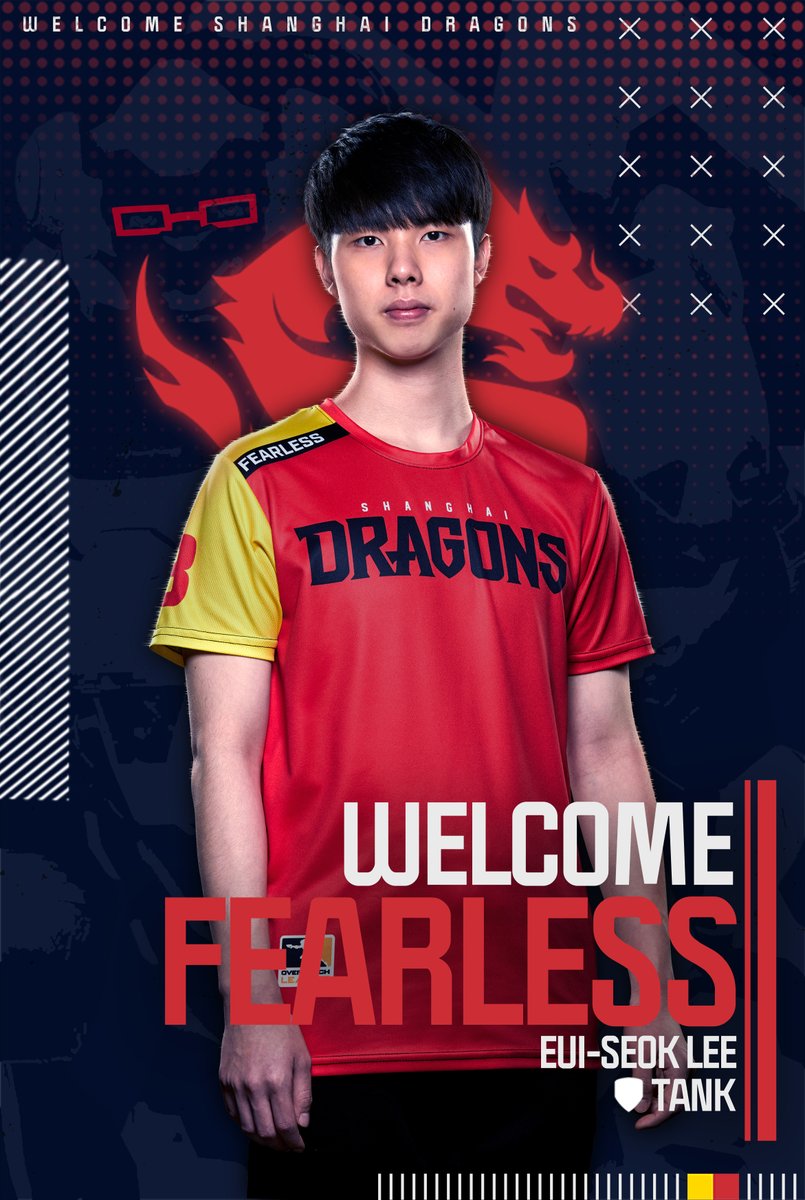 On January 18th, 2020, in his return to the Overwatch League, it would only be fitting if Fearless reunited the Shanghai Dragons and what a reunion it would turn out to be.

Throughout the third instalment of the Overwatch League, Fearless and the Shanghai Dragons would prove time and time again that they were clearly the best team in Asia. Even with teams like the New York Excelsior, London Spitfire, and Seoul Dynasty relocating back to Asia due to the COVID-19 pandemic, the Dragons maintained their position at the top of the mountain.

Their claim to the throne was sealed with a red wax stamp after not only winning the May Melee grand finals against the Seoul Dynasty but reverse sweeping them. Down 0-3, the Dragons called upon Fearless to come in on match point on Map 4 to lead the team. Four maps later, they walked away champions, but Fearless walked away redeemed. He wasn’t a failure, he wasn’t lost potential, he was a part of something great.

In a move of proud and dramatic irony, Fearless put on his inaugural season jersey as he and the Dragons’ reverse swept the Dynasty. For the world to see, he wore that jersey like a scar; no shame, no suppression.

Fearless refused to give up. He put blood, sweat, and tears into this game and emerged from that fire, a champion. It's a story that esports tells so well; One of potential, of failure, rebirth, and redemption. Fearless, we cannot look away.