As FaZe Clan gets in on the Among Us action, the team is holding an In'vent'ational tournament with a $25,000 prize pool.

As one of the biggest esports houses out there - and with Among Us continuing the climb the Twitch charts - FaZe Clan is cashing in on our latest obsession with the FaZe Clan Among Us In-Vent-ational.

Collaborating for a round of murder most foul, the team is hosting the Livestream event in partnership with BoomTV and G FUEL. 40 players will take part, including a mix of FaZe talent and some of their celebrity friends.

Those taking part will compete for a $25,000 prize pool and aim to be the ultimate Imposter or lucky Crewmate who survives a brush with death. Of course, the name is a clever riff on the way Imposters sneak around the spaceship's vents and kill off innocent astronauts.

FaZe Clan
@FaZeClan
📢 EMERGENCY MEETING
FaZe Clan presents the Among Us IN-VENT-ATIONAL powered by @GFuelEnergy
Coming to you this Monday, October 19th at 2PM Pacific/5PM Eastern!
Who do you want to see playing? Tag 'em below. 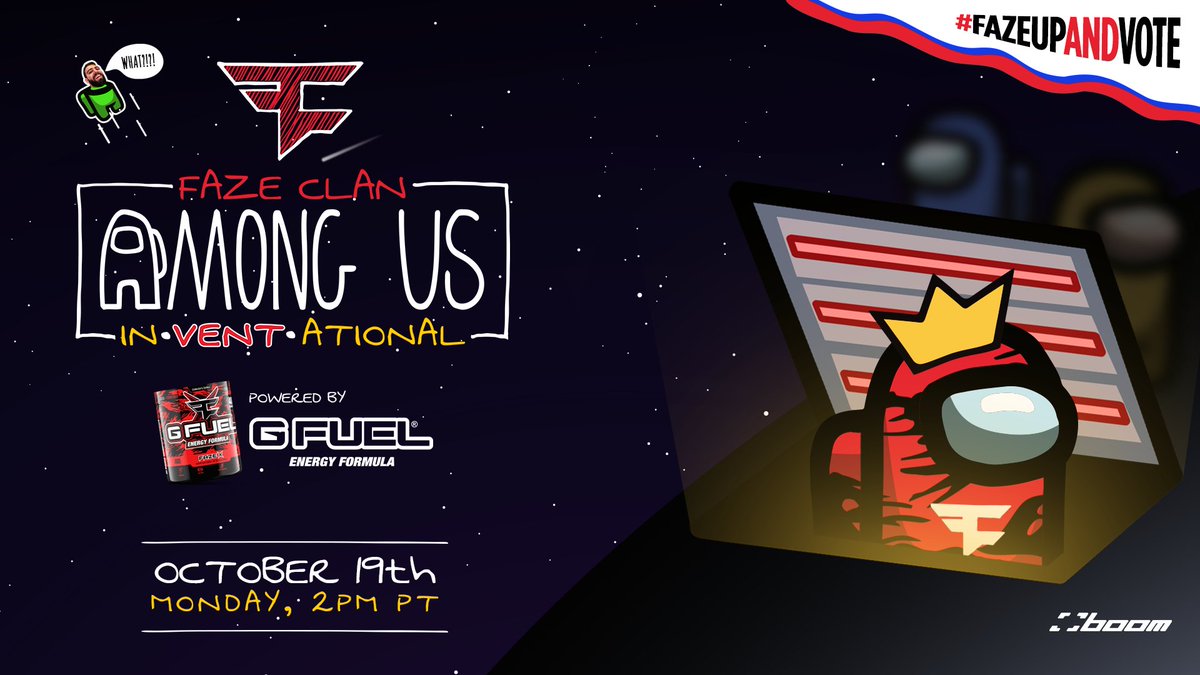 What is the FaZe Clan Among Us In-Vent-ational?

Each participant will be playing for themselves for a share of the prize pool, so don't expect the FaZe gang to let their bromances get in the way when it comes to pointing the finger, throwing each other under the bus, and committing murders in electrical.

When can you watch the FaZe Clan Among Us In-Vent-ational?

If you want to tune in, the FaZe Clan Among Us In-Vent-ational will be going live at 2pm PT/10pm BST on October 19 and promises to be a must-watch Among Us tournament. You'll be able to tune in on FaZe's YouTube and Twitch channels. Added to this, anyone who streams has the chance to win some exclusive FaZe Clan merchandise. Bearing in mind the FaZe Clan edition of Twitch Rivals pulled in a massive 1.1 million viewers, the Among Us competition could be big news.

The competition is also being used to promote G Fuel's limited-edition flavour called "FaZe X”, which launches on October 21 to celebrate FaZe's 10-year anniversary. The timing couldn't be better when considering Among Us is right at the top of the Twitch charts and recently helped Félix "xQc" Lengyel overtake the over streamers.

Although the three-man team at InnerSloth has canned its plans for Among Us 2, the team is going back to basics and making sure the first game is ready to keep growing as the best it can be in the emerging market of social deduction games. Make sure you tune in on October 19 for the FaZe Clan Among Us In-Vent-ational.