One Mediatonic designer has revealed how the Fall Guys Season 2 levels were brought to life for the party game.

Mediatonic is dragging us back to the Dark Ages with the Medieval-themed Fall Guys: Ultimate Knockout Season 2. As well as the addition of dragons, damsels, goblins, knights, and Sonic the Hedgehog (for some reason), there's the spiny Thicc Bonkus who's throwing its weight around on some of the game's brand new levels.

With the likes of Knight Fever and Hoopsie Legends giving Fall Guys a new lease of life, you might be questioning how its done. While Fall Guys had a meteoric rise to the top, the bouncy party game was soon hit with accusations it would become a dead game unless developers keep it fresh. Taking us to fantasy realms populated by dangerous quests has silenced most of the game's critics and had us rightfully questioning what could come next.

Thankfully, there's nothing Medieval about how the levels were designed. In fact, it's quite a complicated affair, which was highlighted in a new post. 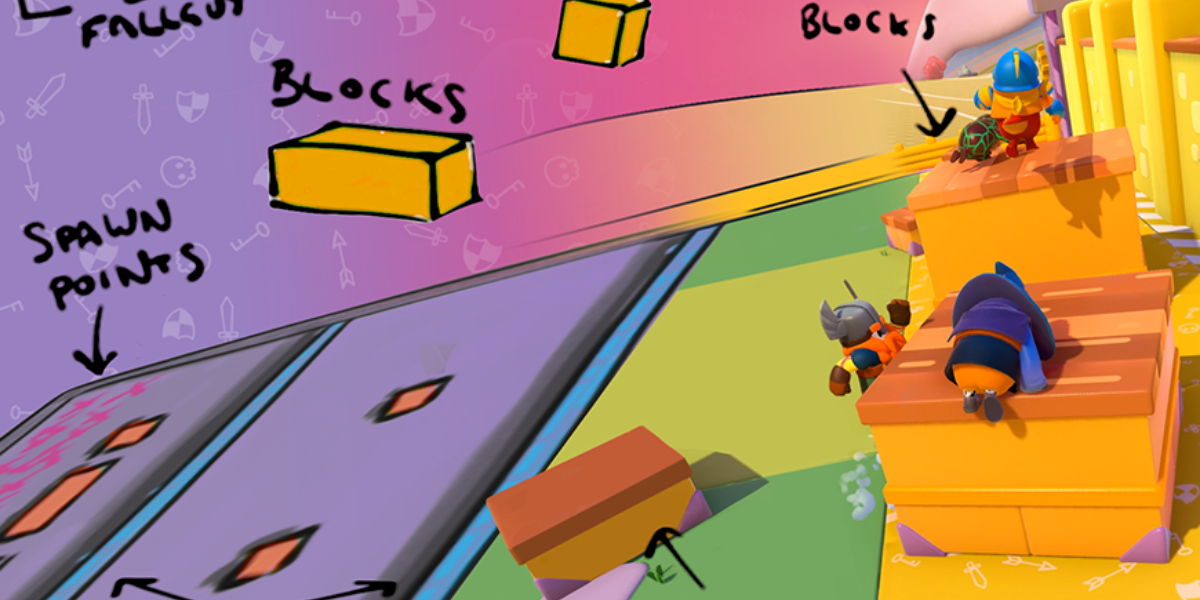 How were Season 2's levels designed?

Game Designer Ben Nizan explained how new levels went from paper to screen in a lengthy blog post. First off, Nizan revealed the idea fo Wall Guys is actually one of the oldest concepts developers came up with. It was apparently the brainchild of Lead Level Designer Megan Ralph, who put together the idea of players working alongside each other to move blocks. An early idea had small blocks that could be stacked, however, Nizan said it soon got chaotic with a crowd of bubbling beans piling in a heap.

But what about the lowering walls? These were the work of Senior Designer Anthony Pepper, with Nizan continuing, "That way, if a particularly disruptive group of beans were making progress difficult, the scale of the challenge would slowly decrease". Elsewhere, Hoopsie Legends got its own time in the spotlight. While we happily call it Hoopsie Legends, the level was originally going to be called Hoops Blockade. Take your pick on whichever you think is better.

The design worked off Season 1's Hoopsie Daisy which Nizan said allowed them to "build on that foundation to create a level that plays out like some kind of acrobatic show!". It was imagined as another loathed team game, but a last-minute save finally introduced it as the first points-based solo round.

Hoopsie Legends is clearly a favourite of Nizan's as he described it as having "the See Saw Secret Sauce with some extra chillies thrown in". Discussing how both levels use teamwork and then allow rivals to twist the knife, that was always the plan of Nizan and the rest of the designers. He summed it up beautifully by saying, "Is there nothing more emotive than buddying up with someone to move a block only to push them off it? The betrayal is absolutely delicious".

What about the future of Fall Guys?

This brings us to the crux of Season 2's ability to physically change the level around you, Moveable ojects were used sparingly in Season 1, but here, they're in full force. Nizan concluded, "A really cool thing about the movable blocks and ramps in Season 2 is that they allow players to dynamically modify the environment they’re playing in.

"To literally grab the level itself and drag it around means the flow through the level is constantly changing. It’s exciting to work on because it means that change comes directly from the interactions between players and environment and isn’t defined by us. Player power!".

With moveable blocks being such a tricky mechanic to master, this is why they were saved for Season 2. Nizan admitted there were a few early bugs where blocks would go flying off the course, however, things seem fixed now. As for the future of Fall Guys, Nizan stopped short of revealing Season 3's theme - we're hoping it's space with an Among Us crossover.

The designer rounded off saying, "I’m often keeping a keen ear out for community feedback so who knows, maybe we’ll be coming up with brand new rounds that use them in future? (Maybe we’ll combine them with See Saws? You’d love that...right?)".

Here's hoping Nizan and the rest of the designers have more tricks hidden up their sleeves. Well, there was a magical theme to Season 2.