Can playing with Dr Disrespect's Rogue Company skin get you banned from Twitch like the superstar streamer?

You've been warned, playing on Dr Disrespect's Rogue Company map as the streamer could get you banned from Twitch. As Herschel "Guy" Beahm IV's Twitch ban continues to be the talk of the esports town, Doc has been busy elsewhere with the likes of YouTube and designing a new map for Hi-Rez Studios' Rogue Company. Despite the game only entering closed beta in July and going free-to-play on October 1 to the wider world, Rogue Company has amassed a huge playerbase.

Hi-Rez has a lot going for it thanks to enabling cross-progression and cross-save across all platforms, but added to this, the addition of big names like Dr Disrespect have helped catapult the title to the mainstream. Still, there are swirling rumours that playing with Doc's new skin could risk getting you banned.

The problem comes from the fact the Dr Disrespect-themed skin for Dallas makes your character look exactly like the man himself. This comes with several problems considering he's banned from Twitch and appearing on it at all. This has come with some sort of workaround as streamers have got away with playing alongside Doc by keeping him muted. However, running around Disrespect's Arena map while dressed as him opens up an even bigger can of worms.

According to Michael "shroud" Grzesiek (via Dexerto), Rogue Company players could find themselves caught in the crossfire of the Dr Disrespect/Twitch war and inadvertently get given the boot as well. Discussing the situation on Twitch, shroud said the problem arises from using the likeness of the banned streamer. "I would say it’s only tricky in that one part, because it’s like, 100% his likeness, you know? It looks like him and everything", admitted shroud.

He then added, "That’s why I said it’s a tricky question, right? If it was, like, a gun skin, that’s a little different. But it’s a full-on, whole body… That’s when it’s just like ‘I don’t know’". Ultimately, we don't know what's going to happen. Dr Disrespect's skin and map are both now live, and although the skin costs money, we're expecting to see a lot of tiny Docs running around the third-person shooter.

Jake Lucky
@JakeSucky
Not many people doing it like Doc man
Ninja's has in-game skins, Pokimane has a dance, 100T has a weapon line and skins, but Dr Disrespect now his own personalized map and character skin in Rogue Company
The moves continue for gamers 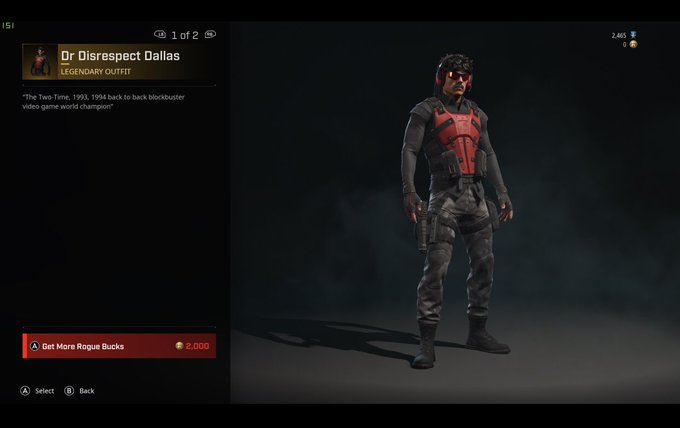 Only time will tell whether using the Dr Disrespect skin will be an issue on Twitch. We're fully expecting the streaming service to speak out on the issue and warn players if playing as Doc could lead to a potential ban. Although The Arena is jam-packed with references to Dr Disrespect, it should fly under the radar because it isn't directly promoting him.

Twitch's notoriously shadowy procedure on how/why streamers are banned means we might never know why Dr Disrespect was banned. He played dumb on the whole situation and also claimed he had no idea why he was kicked. Considering he was one of Twitch's biggest names, it caused one hell of a scandal. For the time being, we suggest treading cautiously in Rogue Company as Dr Disrespect continues to be a controversial figure in the timeline of Twitch.