They say there's no such thing as bad publicity, and when it comes to CD Projekt Red's Cyberpunk 2077, that definitely seems like it's the case. Whether it was the fact Cyberpunk 2077 comes from the developer behind the acclaimed Witcher series, that we've been waiting since 2012 to play, or that it was offering something new as a Blade Runner-inspired shooter, it's fair to say there was a lot of hype ahead of its release. Unfortunately, it seems the open world behemoth has fallen victim to its own success.

The writing was already on the wall for Cyberpunk 2077 when it was pushed from its original release date of April 16. With reports that the PC version was ready to go but the console edition(s) were trailing behind, we then saw the ambitious title pushed to September 17, November 19, and (finally) December 10. To say the game has had a rocky start would be an understatement, but even in a market dominated by next-gen games, Cyberpunk 2077 has been going great guns in terms of sales.

Daniel Ahmad
@ZhugeEX
CD Projekt Red says that it has sold 13 million copies of Cyberpunk through digital and physical distribution channels as of December 20.
This number factors in refunds processed by this point at both retail / digital.
The game had 8m pre-orders prior to launch. 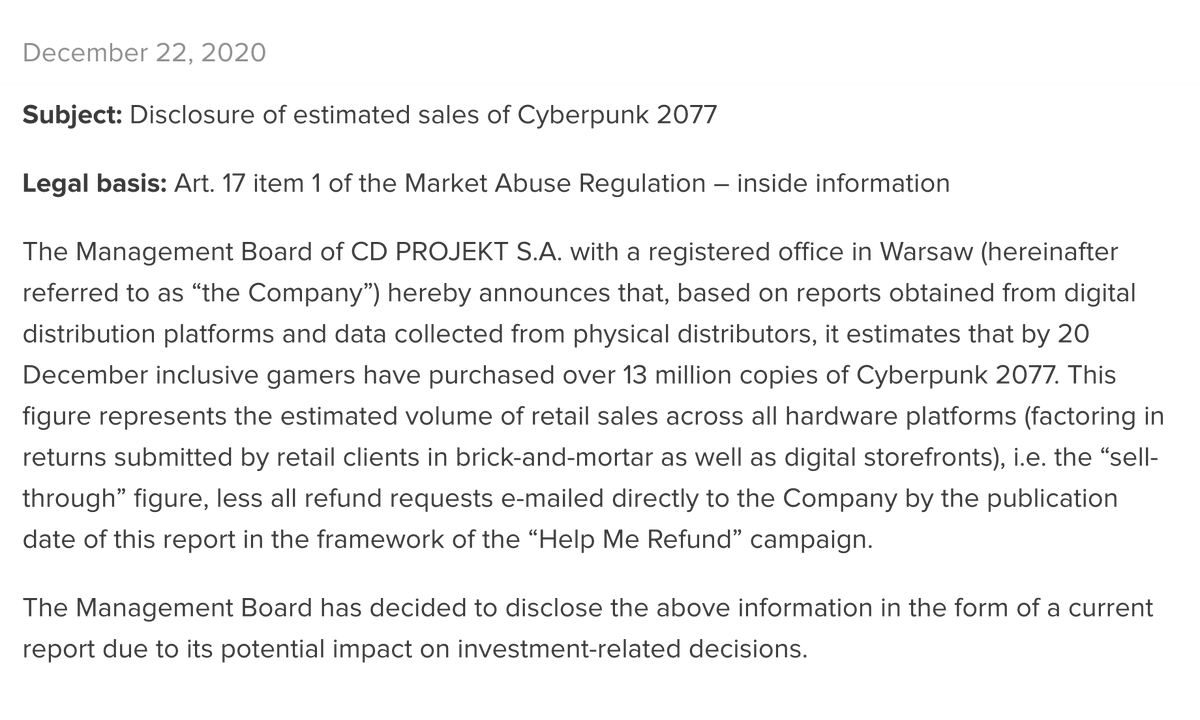 An announcement from CD Projekt Red confirms Cyberpunk 2077 has already sold a whopping 13 million copies. The company told players, "This figure represents the estimated volume of retail sales across all hardware platforms (factoring in returns submitted by retail clients in brick-and-mortar as well as digital storefronts), i.e. the 'sell-through' figure, less all refund requests e-mailed directly to the Company by the publication date of this report in the framework of the 'Help Me Refund' campaign".

It may sound great, but as games analyst Daniel Ahmad points out, the Cyberpunk 2077 sales figures have been revealed as a way to reassure wary investors who are presumably in a panicked state right now. Ahman claims the stats have been showcased to help limit "potential impact on investment-related decisions". Also, despite Cyberpunk 2077's launch being "one of the largest premium game launches ever", let's remember there were already 8 million pre-orders before it even shipped.

ðŸ³ï¸â€ðŸŒˆ Nova, Starlight Girl ðŸ³ï¸â€âš§ï¸ BLM
@NovaNyan
I'm feeling heartbroken for the devs at CDPR who just wanted to make Cyberpunk a cool game. I'm hoping for the best they don't have to crunch to get the game back up on the PS store. I'm hoping they don't get laid off for the lack of sales.
1/2
2
19

While Cyberpunk 2077 is poised to enjoy another uptick in sales if issues can be resolved, let's look a little closer. As well as a massive hotfix that doesn't quite fix everything - with PC players claiming it made it worse - there's also the fact the game was delisted from the PlayStation Store. These days, it's almost unheard of for Sony to pull an AAA game, meaning CD Projekt Red is undoubtedly feeling the crunch in another worrying week.

Looking at the bigger picture though, Cyberpunk 2077 sales are set to skyrocket in 2021. Although there's no concrete release date, the next-gen upgrade for PlayStation 5 and Xbox Series is guaranteed to be huge. Yes, you can play Cyberpunk 2077 on these consoles, however, we're promised a full next-gen version next year.

The main argument is that developers never should've released the game on PlayStation4 and Xbox One because these systems can't handle the sheer grunt of the game. Players have already seen how the hotfix has massively improved graphics on the Xbox, so here's hoping it's a sign of things to come.

For now, it's back to watching Cyberpunk 2077 continue to climb the charts as (almost) everyone moans about the state it's in. Even if CD Projekt Red has a lot of work to do, we say crack open a bottle of bubbly and celebrate the 13 million milestone. You've earned it!