It's a new year for CD Projekt Red as gamers can now play Cyberpunk 2077 in third-person thanks to a fan-made mod.

If you're sick of staring down the barrel of a gun while playing Cyberpunk 2077, fear not, you can now play CD Projekt Red's sprawling sci-fi shooter in third-person. That's right, you can see a whole new perspective as you sleep with prostitutes and shoot up mercenaries in the neon-drenched backdrop of Night City. For those who've long-hoped developers would introduce a third-person view, it's a win for the little person - well, sort of!

When it comes to Cyberpunk 2077, players take control of a mercenary called V. As they tour each of Night City's distinct districts, they take V on a journey into the unknown and (with only days to live) try to topple a shady tech corporation. It's the plot of pretty much any major sci-fi movie, and tosses you right into the drama with its up-close perspective.

Although players continue to ask for third-person capabilities, CD Projekt Red has been a little busy tackling the wave of graphical complaints, glitches, and a swathe of bad press that's marred the game's release. Thankfully, someone else has answered our third-person prayers.

How can you play Cyberpunk 2077 in third-person?

Given that Cyberpunk 2077 comes from the acclaimed studio that brought us the likes of The Witcher 3: Wild Hunt, many assumed it would follow in its predecessor's footsteps and be third-person. Even if that isn't the case, the PC modding community has been quick to grab hold of Cyberpunk 2077 and work its own magic. Available to download now, Jelle Bekkar has uploaded the "JB-TPP MOD WIP THIRD PERSON" to Nexus Mods.

Installing is simple as long as you have the Cyber Engine Tweaks mod already installed. From there, players can extract the downloaded third-person mod into the "Cyberpunk 2077\binx64\" file. Once this is done, your shiny third-person Cyberpunk 2077 should be ready and raring to go. It's a little easier than removing a biochip from V's head. Unfortunately, there are yet more Cyberpunk 2077 glitches getting in the way of the mod. Even though it's great that you can flick between one of the four camera angles at the press of a button, the mod's work-in-progress status means things can get a little buggy.

Yes, walking around Night City in third-person looks great, however, we'd maybe advise against swimming. Various videos have appeared online showing the mod in action. Alongside giving V a trot instead of running, a dip in the water will cause a glitch and display V as some sort of splay-legged monster. Still, it's nice to have a different view of this wide world.

Why isn't Cyberpunk 2077 in third-person?

BanishedPotato
@BS_artsss
Hearing about all the cut content from cyberpunk 2077 blows my mind and makes me sad. It makes sense why this game feels so unfinished. Third person cutscenes removed are a big one. And If meredith content was cut i would like it back plz.ðŸ™
Also found best car to cruise in.ðŸ˜‚ 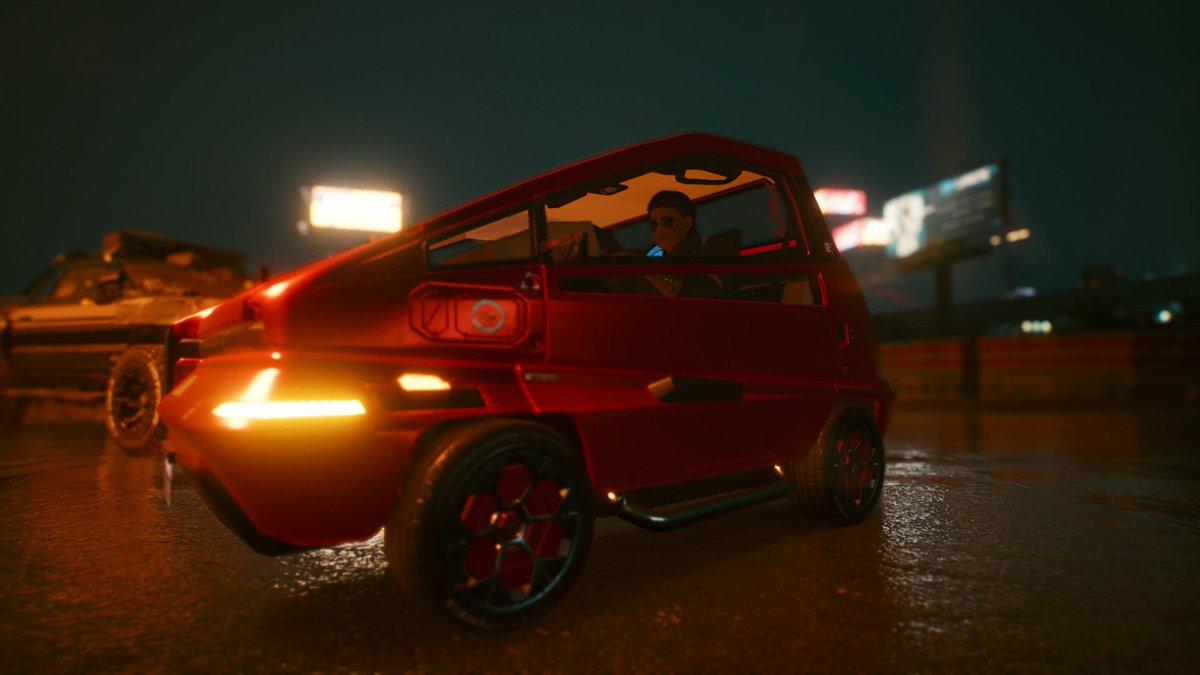 Way back when, CD Projekt Red made a lot of noise about why Cyberpunk 2077 would be in first-person - saying it wanted to throw you into the hustle and bustle of Night City. Aside from the occasional shot while you're driving, the game is almost entirely limited to a first-person perspective. It seems like such a shame considering how much emphasis designers put on character customisation and promises that Cyberpunk 2077 would be inclusive for all.

For the time being, only PC players can make the most of the third-person Cyberpunk 2077 mod, which leaves already disgruntled Xbox and PlayStation players out in the cold. 2021 should be a big year for Cyberpunk 2077 thanks to the hopes of much-improved next-gen releases and the first drop of DLC content. Who knows, maybe we'll even get an official third-person mod from CD Projekt Red itself? Well, there's no harm in asking!