The final CDL Home Series of the regular season is sure to be a heavyweight battle for postseason seeding.

The final Call of Duty League Home Series got underway today as the Toronto Ultra hosted eight teams. This event is packed with the top four squads in the CDL, being Dallas, Atlanta, Florida, and Chicago. While these four are set going in the postseason, there's still the matter of seeding to be determined. Also, the bottom-dwelling teams are fighting to not play in the loser's bracket, which consists of the bottom four spots in the standings. The first day of the Toronto Home Series was largely uneventful but did feature a couple of exciting matches.

To start, we had a David vs. Goliath matchup in Minnesota v. Atlanta. While the Rokkr has given FaZe trouble in the past, that seems to have dissipated in recent weeks. As such, Atlanta demolished Minnesota in a convincing 3-0 sweep. FaZe appears to be on top of their game heading into Saturday, where they'll play the Dallas Empire.

Speaking of Dallas, the reigning champs started off the day rocky, going down 0-2 to rival Florida. However, the three-time champs rallied back to complete the reverse sweep in dramatic fashion. The individual games were fairly exciting, and showed that both squads are more than capable of winning Call of Duty Championships.

The other top-four team in this event, the Chicago Huntsmen completed a hard-fought 3-1 victory over the Seattle Surge. The Surge are fighting to get out of the bottom four spots in the CDL standings, but that doesn't seem like a strong possibility now. Chicago, on the other hand, looks strong heading into Saturday.

In the last match of the day, the home team Ultra took on OpTic Gaming L.A., where they won a thrilling 3-2 series. The Ultra continues to show signs of improvement heading into the postseason and could surprise some top teams. As for OpTic, while they're not winning many series, the new roster featuring two amateur players seems to be producing more map wins. Time will tell if they can turn that into series wins.

Call of Duty League
@CODLeague
Friday is over, but the @TorontoUltra Home Series is just heating up. Check out how the schedule and bracket looks heading into tomorrow. ðŸ”¥
Subscribe and set your reminder for tomorrow's stream: 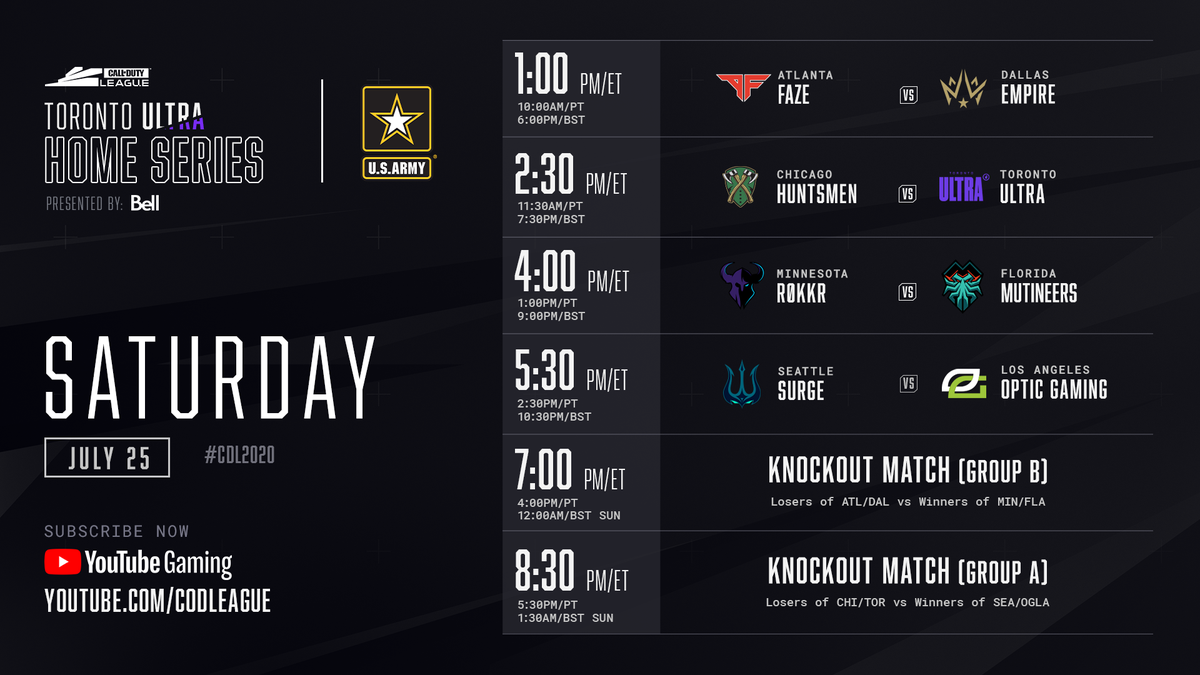