The Call of Duty League returned to action today as New York hosted its Home Series.

The Call of Duty League was back in play today as the New York Subliners played host to seven other teams. There was some controversy heading into the event, as some Gentlemen Agreements went a little too far. Prior to the first match, we didn't really know what to expect in terms of how the games would play out. However, the first day of CDL New York was controversy-free. While the matches themselves were a bit stale, day one had some great individual moments. Let's see how the first day played out and look forward to Saturday.

Friday began with a fairly standard match between the Toronto Ultra and Paris Legion. Both squads are fighting for postseason placement at the bottom of the CDL standings so this series did carry some weight with it. However, pretty much as expected, the Ultra came away with the 3-1 win over Paris. The Legion simply hasn't had any strong showings since their initial spurt at the beginning of the season. Toronto on the other hand, could be a dark horse heading into the postseason.

After the Toronto v. Paris match came the marquee matchup of the day. The Atlanta FaZe versus the L.A. Guerrillas promised to excite, as the drama leading up to the event was thick. FaZe were planning on using the restricted AUG submachine gun and the Guerillas threatened to bring out every item that was previously a part of the Gentlemen's Agreement. Alas, both squads went with the traditional MP5/M4A1 setup, and FaZe won comfortably 3-1. It seems Atlanta was coaxed out of using the AUG for this event.

The remaining two matches played out exactly like the first two with a 3-1 score. The Chicago Huntsmen seemed to return to form against the London Royal Ravens. Perhaps the Huntsmen's slump is over and we may finally see the FaZe v. Huntsmen matchup after all. Finally, the home team Subliners defeated the Minnesota Rokkr without much trouble. Minnesota has fallen off the rails in the last two months and needs some kind of spark to get back on track.

The CDL action resumes tomorrow at 1:00 p.m. ET with the Ultra taking on FaZe. Could we see the AUG in play? Or will Atlanta follow the same strategy as today?

The second day of CDL New York has come to a close and we now look ahead to Championship Sunday. The four teams remaining are the Chicago Huntsmen, Toronto Ultra, Atlanta FaZe, and New York Subliners. This was a common pre-event guess, as all four of these teams have been looking great in the new meta. However, the biggest talking point to come out of day two is we finally get to see the long-awaited Huntsmen v. FaZe matchup.

Saturday began with a bit of a shock, as the Ultra were able to take down FaZe by a score of 3-2. The Ultra has been giving Atlanta problems and today it finally caught up to the boys in red and black. Toronto yet again looks strong and makes it to another semifinal. Though they're in last place of the standings currently, that won't soon be the case. The question is how much can the Ultra improve before the postseason? As for FaZe, they bounced back against Paris relatively easily to make it to Sunday. While the Legion won a game for the first time in weeks, they still aren't near the top teams in the CDL.

Turning to the other side of the bracket, the Chicago Huntsmen were able to defeat the New York Subliners in a thrilling 3-2 series. New York once again brought their A-game against Chicago but it still wasn't enough. The Huntsmen were simply too strong in Search and Destroy and look deadly in the new meta. However, we could see a rematch of this series tomorrow if New York defeats the Ultra and Chicago defeats Atlanta. 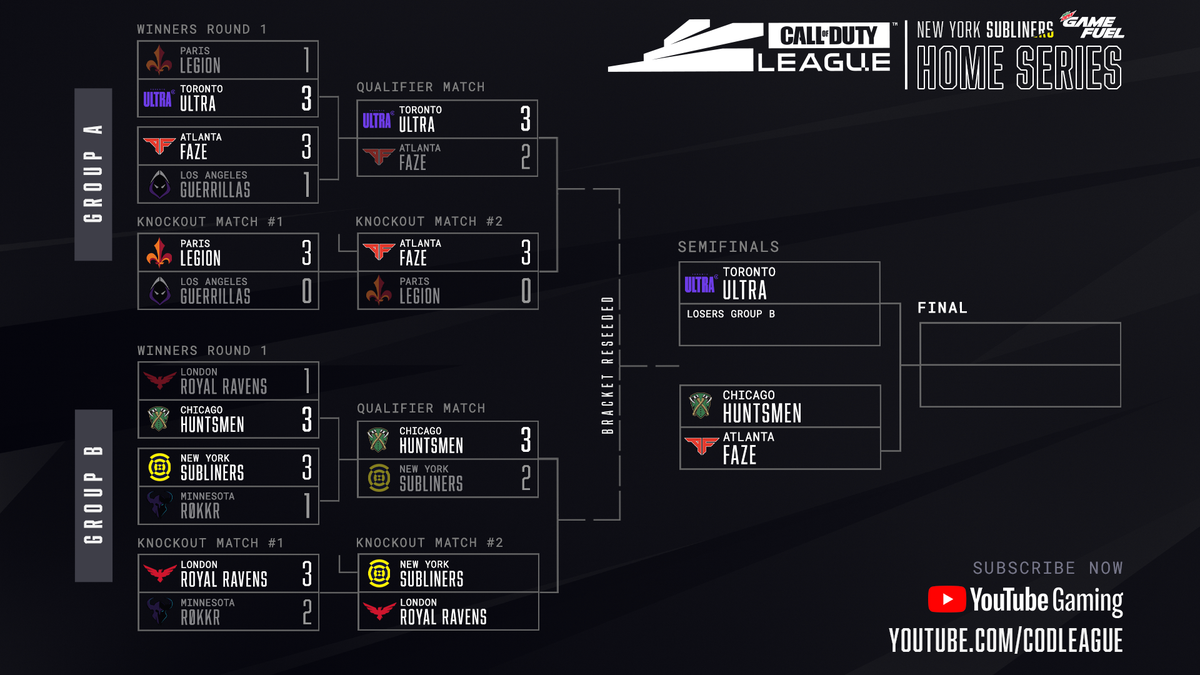 Fans have been waiting since the first event to see Atlanta and Chicago play. Though, up until this point, neither team managed to win enough games to get to that point. CDL New York is finally where we can see the two juggernauts match up, however. It should be an exciting match and is easily one of the most anticipated series thus far in the CDL.

Another Home Series has concluded and for the second time this season, the hosting team has won its own event. Like the Atlanta FaZe before them, the New York Subliners have taken home this CDL Home Series Championship. Defeating the red-hot Toronto Ultra and Chicago Huntsmen for the win, New York captures its first victory of 2020.

Sunday was certainly an exciting day, as we finally had the dream matchup of FaZe v. Huntsmen. However, it turned out to be a bit of a snoozefest as Chicago easily 3-0ed Atlanta. None of the maps were truly close and it seems the Huntsmen are blossoming in this new AR-dominant meta.

However, they then met the Subliners, who defeated the Ultra rather handily in the previous match. Chicago and New York played yesterday as well, with the Huntsmen winning in a nail-biter, 3-2. Today was a different story though, as the Subliners finally bested the NRG-based organization in a stunning 3-0. New York's ZooMaa really stepped up in the Finals, giving Chicago all they could handle and then some. We could certainly be seeing the birth of another contender for the CDL postseason in the New York Subliners. However, Chicago did look like a top team again versus Atlanta. It's sure to be an action-packed thrill ride down the stretch. 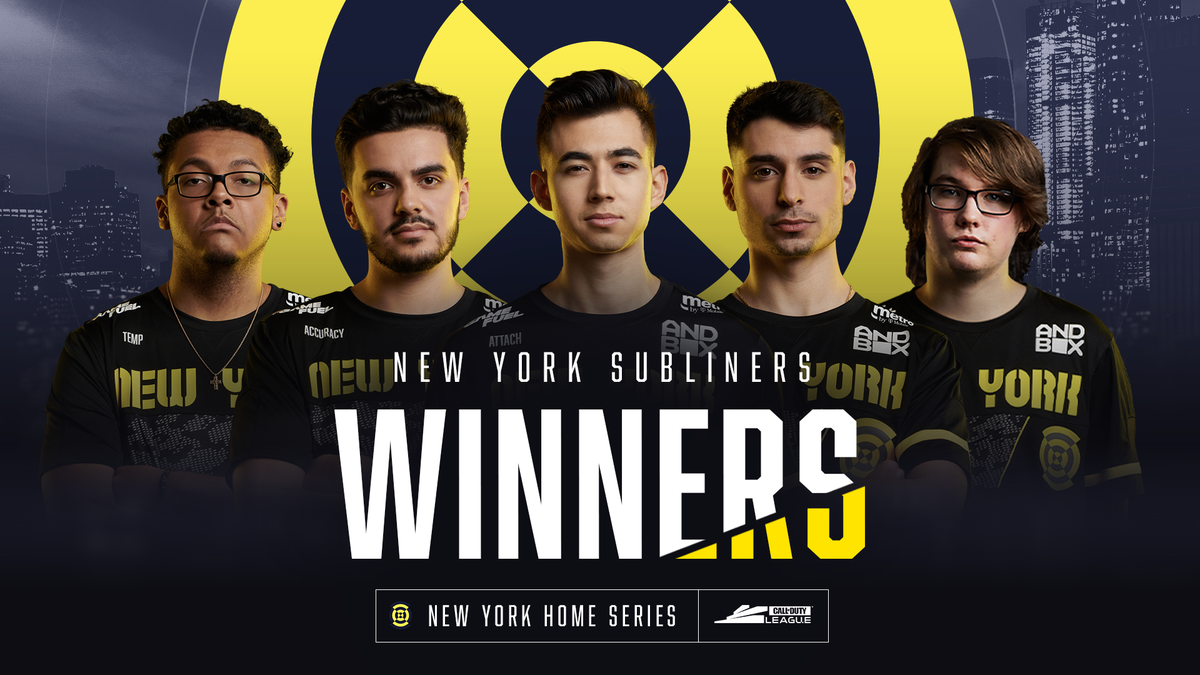 Stay tuned at GGRecon for more Home Series updates on our Coverage Hub.