Everything you need to know from what happened at the Call of Duty League Chicago Huntsmen Home Series.

The Chicago Huntsmen host this week's Call of Duty League Home Series, looking to top the league table with a victory. Played online, the Chicago series contains rival teams meeting up, a scrap for points in the playoff places, and the chance to see the first, and highly anticipated, match-up between the Huntsmen and Atlanta FaZe; it's set to be a cracker.

The absence of the Florida Mutineers and the Minnesota Rokkr will give some of the lower teams in the current standings opportunity to face each other and potentially begin to show a crevis between the teams gunning for a Play-off place, and those lost at sea.

The Chicago Huntsmen Home Series will be the second online event since Activision moved the CDL online due to the coronavirus. This time around we will see Dallas Empire and 'hosts' Chicago Huntsmen be placed in separate groups again, meaning we could see their ongoing rivalry heat up a notch and possibly meet in the final; although Scump and Co. will have to unhinge the Atlanta FaZe. FaZe return to the scene after over a month and a half, looking to bounce back for their first defeat.

With this being said, the road to success looks inevitable for the Dallas Empire, who, if performing to their usual standards, should reach the final as a minimum, to face either Chicago Huntsmen or Atlanta FaZe.

The first day of the Chicago Home Series went about as expected with one exception. It's apparent that the online factor is playing a role in how some teams perform but overall, the outcomes have stayed relatively consistent. The Atlanta FaZe and Dallas Empire are continuing to dominate and Seattle took care of business against the Guerrillas. However, the home team Huntsmen have once again underperformed and now drop to the losers bracket after falling to the Subliners.

For the past couple of months, Chicago has been faltering in the worst ways possible. Some matches they look strong in Search and Destroy but can't take the extra respawn they need to close out the series. In other matches, they can't seem to buy an S&D. Against the Subliners today, the latter was in effect, as the Huntsmen dropped both S&D's. While they did show some fight coming back from a 0-2 deficit, Chicago needs to figure out how put it all together if they want to start winning matches again.

As for the rest of the games, everything went according to plan. Dallas defeated OpTic Gaming handily as Anthony "Shotzzy" Cuevas-Castro went off in every game. The Atlanta FaZe continued their string of dominance with a sweep of the Royal Ravens. Chris "Simp" Lehr set a new overall kills record with 49 in the first Hardpoint and also set the record for most kills in a three map period with 89. Lastly, the Seattle Surge defeated the L.A. Guerrillas in a 3-0 sweep as expected.

The action continues tomorrow on Saturday, April 25 starting at 1:00 P.M. EST with Seattle taking on Dallas in Winners Round 2.

Call of Duty League
@CODLeague
With a record 49 kills in Hardpoint, @SimpXO shows why he's one of the best in the league!
#EZAF | #CDL2020
(Play of the Game presented by @ScufGaming)
133
659

In a jam-packed day, Chicago's Home Series has provided some great entertainment. Though the matches haven't been very close, players from all teams are going off left and right. Yesterday it was Shotzzy and Simp, today it was an entirely new cast of players. However, four teams were sent home on day two, leaving four left in the Winners Bracket, being Chicago, Atlanta, Dallas, and Seattle.

This was the most likely outcome that most expected. While Seattle is a tad surprising, the rest of the field hasn't been too promising. New York did manage to steal a series from Chicago yesterday and even went to map 5 with FaZe earlier today. They fell at the hands of the Huntsmen in the Knockout round though, ending their tournament.

Speaking of the Huntsmen, the team really turned it around today. They defeated London 3-1 then played the grudge match against New York and pulled out another 3-1 victory. The Dallas Empire are awaiting them in the Winners Bracket tomorrow and that match could go either way.

On the other side of things, Seattle has still only defeated the L.A. Guerrillas. However, it was enough to advance to Sunday where they'll take on Atlanta. This match should go in favour of FaZe but ATL has looked a little shaky at times during this Home Series. You can catch the FaZe vs. Surge match at 4:00 P.M. EST tomorrow, Sunday, April 26 followed by the Huntsmen vs. Empire match at 5:30 P.M. EST.

Call of Duty League
@CODLeague
The Chicago @Huntsmen get their revenge beating the New York Subliners 250-167 Hardpoint on St. Petrograd.
They will advance onto CDL Sunday to play the @DallasEmpire.
#BeTheHunter | #CDL2020
73
741

Another weekend, another Home Series has been completed. In what was an exciting and record-breaking weekend for the CDL, the Dallas Empire have captured their second Home Series Championship. The Empire defeated the Atlanta FaZe by a score of 3-1 after defeating the Chicago Huntsmen 3-0 in the Semifinals. Some may argue that online play has something to do with the Empire's success, but they sure looked like the best team in the CDL today.

Coming into the event, it seemed like it was a three-team race between Atlanta, Dallas, and Chicago. Of course, the Huntsmen have been struggling as of late so realistically many thought it would come down to Dallas and Atlanta. This reigned true as the Huntsmen stood no chance against the Empire. The same can be said for the Seattle Surge, as they were bested 3-1 in the Semifinals against FaZe.

This is Dallas' second championship and it comes against a team they previously had not beaten. Shotzzy once again was the star player for the Empire and if he can keep this string of dominance up, Dallas should be a force for the remainder of the season. The next CDL Home Series takes place on May 8 when Florida has the honour of hosting. 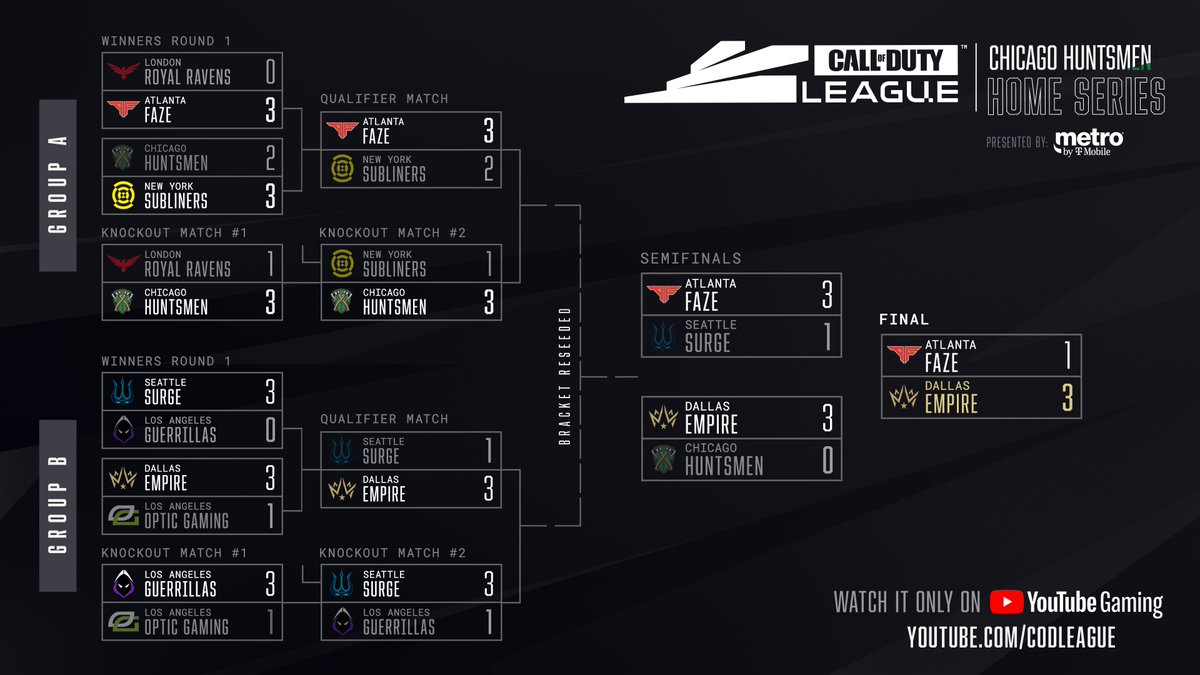 Stay tuned at GGRecon for all of your Call of Duty League news and future Home Series recaps.