There are several conflicting reports and leaks about Titans coming to Apex Legends, so we've collated it all here for you!

Despite Respawn Entertainment reportedly setting the record straight on the likelihood of Titans coming to Apex Legends, several leaks and Tweets seem to suggest otherwise.

Respawn's carefully orchestrated Titanfall universe is where Apex Legends was born (and where all of the lore originated), and fans of the original game and its sequel have been desperate to see the Titans enter the battle royale.

Everything from factions (Apex Predators) to secondary characters (Ash, Blisk) to weapons (too many to mention) have been borrowed from Titanfall (and Titanfall 2) and plopped into the Apex universe, so the logical next step is to include the mega-machine Titans, right?

Respawn Entertainment Game Director, Chad Grenier, has been confusing the fanbase for some time now, most recently tweeting that "we don't have any plans to put Titans into Apex" when he was previously quoted as stating "you’re going to see a ton of Titanfall coming into [Apex] in one way or another. If you’re a Titanfall fan, hang on for Season 9.” Confusing, to say the least.

So, the question persists - are Titans coming to Apex Legends? And if so, will we see them introduced in Season 9? And why have they been teased so often and not yet come to fruition?

Chad Grenier
@ChadGrenier
@shea_mcvaney @TitanfallBlog We don't have any plans to put Titans into Apex, at least in our current roadmap. They are part of the universe but you're right that they completely change the dynamic of the game. Maybe someday in another mode but nothing planned.
5
63

What happened to the titans in apex legends

Ah, Respawn. What a wicked web you weave when it comes to Titans. As we know, Apex and the Legends themselves exist within the Titanfall universe, after the events of Titanfall 2 - meaning Titans definitely exist. This seems (by online evidence) that this would be an Auto-Titan (AKA not piloted) and not be able to be driven or operated by a Legend, and would instead auto-attack until destroyed.

Titans could be considered overpowered for a Battle Royale, and many adjustments would have to be made to their power level before they could be introduced. Perhaps a not-too-OP amount of HP or a timed self-destruct?

is blisk going to be in apex legends

One pretty large indicator of Titans coming to Apex is the possible new Legend - Blisk.

Leaked by several dataminers including Biast12, Kuben Blisk was a South African mercenary Pilot who served in the IMC's forces during the wartime events of Titanfall, also acting as the leader of the Apex Predators faction. In Apex Legends, he serves as the commissioner of the Apex Games, and is seen in quite a few Apex teasers, inviting new Legends to join his battle royale.

Biast12 provided footage of a gameplay clip in which 'Blisk' (we assume), calls in an Auto-Titan as his Ultimate ability, as well as a screencap of an ability screen for the possible new Legend.

These abilities include the following skills, including many elements taken straight from Titanfall:

Tactical - My Ring, My Rules

Create a damaging zone powered by the Arena's Ring (much like the recent Ring Fury LTM, which may have been a test run).

Call in an Auto-Titan to "suppress" an area.

Check out the gameplay clip and screencap below. 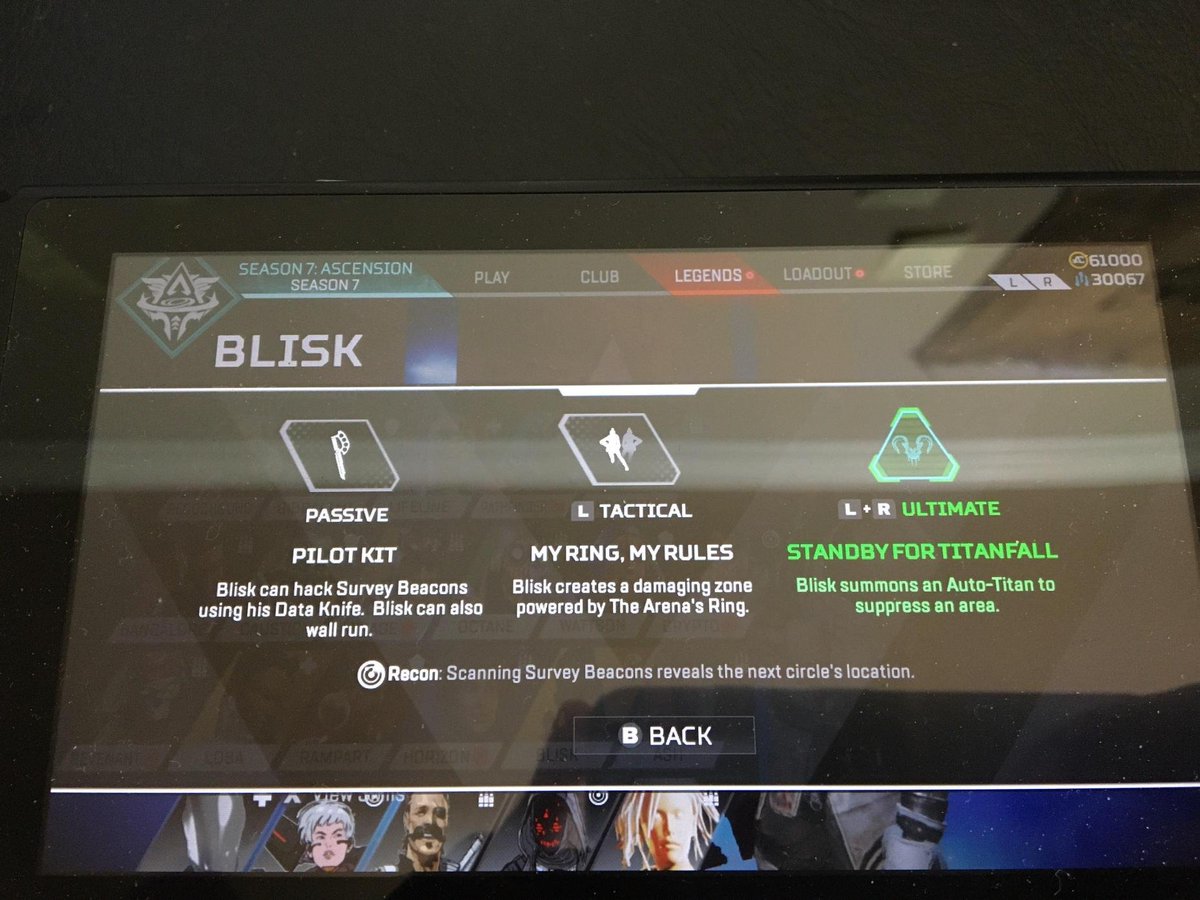 Blisk's addition would surely bring Titans to Apex in some form.

will titans come to apex legends

While evidence of piloted Titans coming to Apex is scarce, Auto-Titans are not off the menu.

The giant robots from Titanfall were included as a possibility in Respawn's early designs (according to Eurogamer) and the prototype map was said to be "sparse enough for titans to roam freely".

While the idea was eventually shelved in favour of a more fair and balanced battleground, as the seasons have gone on, and Legends have proven themselves to be weak or strong (or underpowered vs overpowered), there is space for a Titan to arrive on the map and not provide an unfair advantage.

That's the burning question. While 'Apex' and 'Titans' can be spoken together in hushed tones, Titanfall 3 is really the crux of the Titan dilemma. The success of Apex Legends has been incredible, and since Titanfall 2 is now five years old, the likelihood of a third instalment seems... unlikely. That being said, EA's Chief Studios Officer Laura Miele revealed this year that Respawn now had the freedom to develop whatever games they wanted, including a new Titanfall game.

While Titanfall 3 is not confirmed to be in development, and Blisk has not yet been confirmed as the Season 9 Apex Legend either, the case is still very much open for the inclusion of Titans. Here's hoping one day we can hear those three beautiful words again - "Standby for Titanfall".