Alexandria Ocasio-Cortez, aka AOC, made a jaw-dropping Twitch debut with massive viewing figures that nearly topped the platform's biggest stars.

It looks like AOC is about to hit the streaming big time. That's right, New York congressional representative Alexandria Ocasio-Cortez could be a star on the rise. The politician tried her hand at playing Among Us and pulled in a (nearly) record-breaking viewership that threatened to topple Michael "shroud" Grzesiek and Tyler "Ninja" Blevins from the top.

We've seen how reality stars and actors have turned to politics with the likes of Reagan, Schwarzenegger, and the current POTUS. Still, it's unusual to see politicians do it in reverse and become viral sensations.

AOC first shared her love of gaming back in May when she said she was a not-so-secret Animal Crossing fan. Realising this was a hit with the electorate, she recently made the jump to Twitch. Her arrival on the streaming giant was an unrivalled success and gave her one of the biggest debut streams of all time. 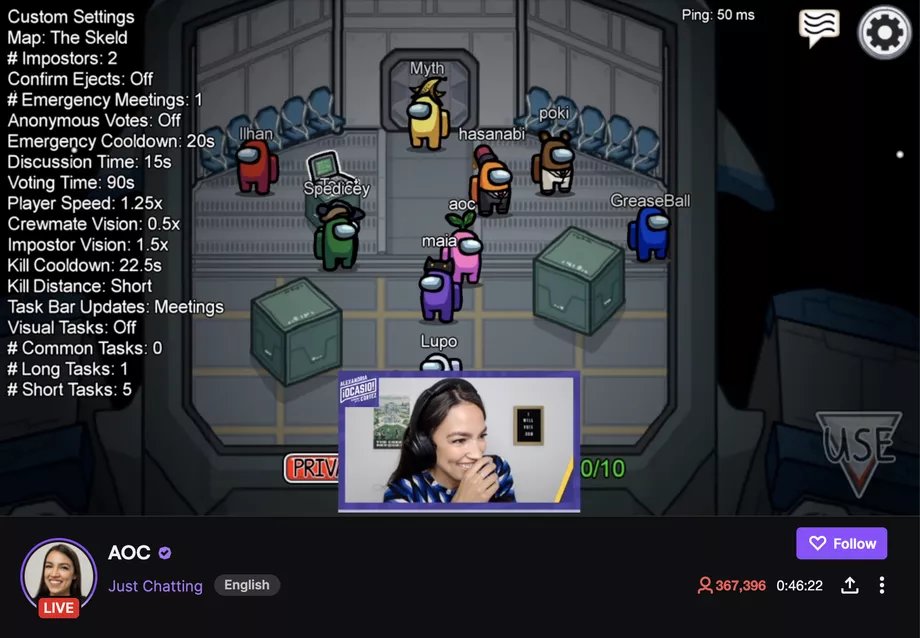 While Ocasio-Cortez was the woman of the hour, she was joined by popular streamers like Imane "pokimane" Anys, Benjamin "DrLupo" Lupo, and Hasan "HasanAbi" Piker, as well as politician Ilhan Omar. Although AOC said she was a "bad liar" in her stream, she seemed pretty good at Among Us. For those who've been hiding under a rock or ejected into the cold abyss of space, InnerSloth's popular deduction game sees players suit up as either Crewmates or Imposters. The Crewmates have to fix the spaceship's systems as the Imposters have to kill innocents off without being detected.

What is the most-viewed Twitch stream of all time?

When looking at the figures, Dexerto points out that AOC's stream is in fifth place with a peak viewership of 439k. This may put her behind shroud's return to the platform and a fair way off Ninja and Drake's eye-watering 616k when they tooled up to play Fortnite, but as starter streams go, it's one hell of a feat.

The numbers speak for themselves, and as one supporter said about the stream, "AOC's stream with a lot of super prominent streamers is probably going to be the single-largest event to reach young voters. Soooo many people tuned in. Probably going to be lost in the general internet illiteracy, but it was a huge stream.”

Alexandria Ocasio-Cortez
@AOC
Anyone want to play Among Us with me on Twitch to get out the vote? (I've never played but it looks like a lot of fun)
28518
390211

How is AOC using gaming to reach voters?

It's definitely a shrewd move from AOC, who seems to connect with young voters more than your average politician. Millions of hours get poured into Twitch, and while there is an older demographic, the age range is largely on the younger side. The creation of her own Twitch channel has been a long time coming. Last year, Ocasio-Cortez appeared on a charity stream and raised over $340,000 for transgender youth.

AOC's Among Us match isn't the first time she's used video games to push her political agenda. After professing her love of Animal Crossing, she opened up her DMs and told players to invite her to their islands. It was a move that worked. When it comes to murdering Crewmates in space, AOC admitted it was all a bit of fun, but importantly, was about sharing her message about the need to vote. The question is now, what game is next and will she be able to dethrone Ninja from his Twitch throne? Watch this space!