Team Liquid and Cloud9 are set to clash in the Upper Bracket Round 2 of the playoffs for their fourth encounter this season.

Team Liquid and Cloud9 will face off this Saturday, April 13, for the first spot in the League of Legends Championship Series (LCS) Mid-Season Showdown (MSS) Final. Both teams took care of their respective opponents in Round 1 of the Upper Bracket in dominant fashion to get there.

The matchup of Team Liquid versus Cloud9 is perhaps the matchup that’s been seen the most this season thus far. They’ve been each other’s opponents a total of eight times; a best-of-five series that went the distance in the Lock In tournament finals and two times during the Spring Split’s regular season.

Each clash between the two new titans of the league saw Team Liquid finish with the upper hand. Earlier in the season, Team Liquid became the LCS’ first Lock In champions after thwarting a near reverse sweep by Cloud9 — this would have been Cloud9’s second of the tournament. Team Liquid swiftly put themselves up 2-0 in the series with the same play they had portrayed all tournament long, but Cloud9 weren’t to go down without a fight. Although Cloud9 were able to push it to a game five, Team Liquid dominantly took care of business, finishing what they started.

LCS
@LCSOfficial
Congratulations again to @TeamLiquidLoL on winning 2021 #LCS Lock In! GG WP! #TLWIN
The 2021 LCS Spring Split kicks off on February 5th at 2:30PM PT / 11:30PM CET with LCS Countdown! Thank you for watching with us all weekend and have a great night! #MadeByMany 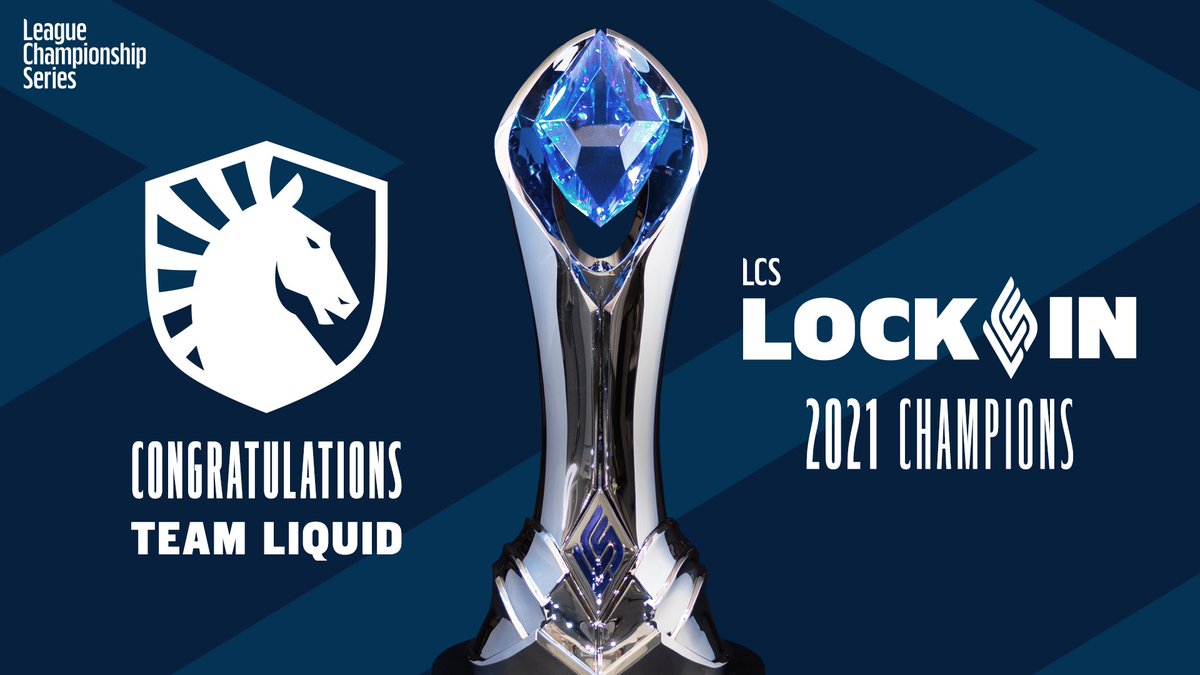 Going into their first encounter of the Spring Split’s regular season, both teams were on different paths. The dominance that Team Liquid showed throughout all of the Lock In tournament was gone, and depending on who you asked, Team Liquid were either shifting on a new focus or possibly peaked a little bit too early. As for Cloud9, they looked like a team that truly learned from all of the experience they gained in the Lock In tournament. Their 17 matches worth of experience really paid dividends as they were 7-1 in the standings and in sole position of first place — shades of the Cloud9 of last year’s Spring Split.

This didn’t matter, though, as even with all the momentum Cloud9 had garnered and the lack thereof for Team Liquid, Team Liquid still dominated them. Throughout all of the mess that was the early parts of the regular season, Team Liquid showed glimpses of that Team Liquid from the Lock In tournament and ended the first round-robin on a positive note.

Team Liquid didn’t skip a beat in their second matchup of the regular season. They once again dominated Cloud9, albeit with a little bit more resistance from them. Cloud9 were on it from minute one, but in what seems to be a Team Liquid tradition throughout all of the recent years, Team Liquid were able to stay calm, make plays and put themselves in a position to get ahead. It all culminated with an impressive macro play of Barney “Alphari” Morris soloing Ibrahim “Fudge” Allami in the bottom lane while Team Liquid started Baron — catching Cloud9 off guard.

Even with yet again another win over Cloud9, Team Liquid were still stuck in the middle of the pack while Cloud9 was flourishing at the top. Cloud9 made sure to remain at the top of the standings finishing in first place, earning themselves a playoff bye. While Team Liquid had a number of lucky breaks, Dignitas’ momentum slowed down, Team SoloMid dropped a few games questionable games, and 100 Thieves became a shell of themselves. This allowed them to finish in third place, tied with Team SoloMid due to them being unable to get the head-to-head.

Once in Round 1 of the Upper Bracket, both teams handily and decisively took care of business. Cloud9 swept 100 Thieves, having a better performance each consecutive match they played. While Team Liquid took a 3-1 victory over their Spring Split demons, Team SoloMid. These two teams are the pound for pound best teams in the league when it comes to talent — their ceiling is immensely high; we’ve glimpses of it all season long. After their loss in the Lock In finals, Cloud9’s dominant journey has led to this moment. While Team Liquid showed they can and will compete, but kind of got lost in the translation between their tournament and win.

This is the playoff matchup that has been expected since the first day of the 2021 season.